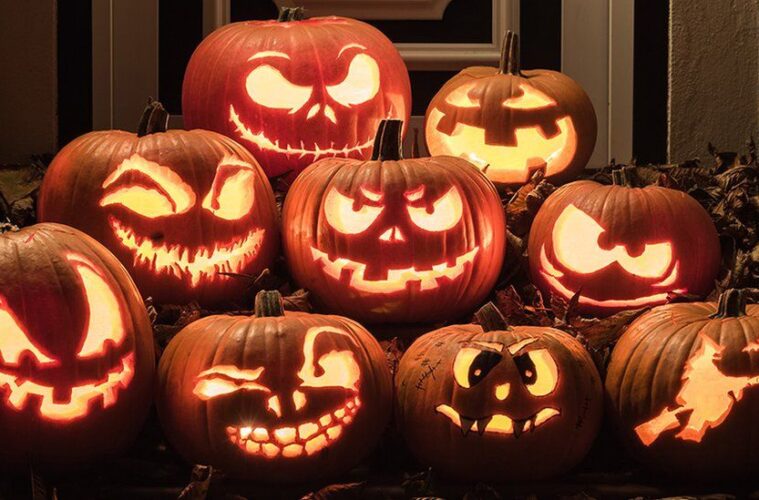 As with Thanksgiving and Christmas, Halloween is a big deal around here. Not just for children!

However, there is a slew of fascinating facts about Halloween that the general public is ignorant of.

It could be a fresh pumpkin fact or a belief about owls and witches.

For this reason, we’ve created this collection of 50 Halloween Trivia questions and answers for your enjoyment.

You may put your festival knowledge to the test by answering these trivia questions, and you’ll have the chance to brag to your relatives about it!

Answer: The term “jack o’lantern” comes from an Irish folktale about a shoddy man named “Stingy Jack” who struck a bargain with the devil but didn’t full his own end of it.

Answer: Lewisburg, Ohio’s Haunted Cave measures 3,564 feet in length and is 80 feet below the earth!

Answer: They do this in order to see their boyfriends

Answer: The studio was forced to adopt the most inexpensive mask possible because of the limited resources.

They spray-painted a white face on a $2 William Shatner mask.

Answer: People believe it to be a loved one’s spirit guarding the finder of the spider.

Answer: The capacity to see and communicate with ghosts

Answer: If you look at them, you’ll see that their brows meet in the center, and they have hairy palms and/or long middle fingers.

They also become hairy in the moonlight

Answer: The Doodle Sack, of course, which means Bagpipes. It doesn’t matter how you look at it; the Scarecrow has many names despite his lack of a heart.

Answer: The film was initially titled Halloween House and included more gore and suspense than comedy.

Answer: Christmas is the best of the year!

Answer: As a result of the Puritans’ link with witchcraft, onyx-colored felines have become associated with the holiday of Halloween.

Black cats are considered auspicious in many cultures around the world.

Answer: On what we now call Halloween, many Europeans, particularly the Celts, donned costumes to fend off the return of evil spirits.

Answer: On All Saints Day, the impoverished would go “souling,” knocking on doors and giving prayers for the deceased loved ones of inhabitants in return for food.

Answer: Trick-or-treating in the United States dates back to the 1920s.

However, in Europe, as far back as the 16th century, people were known to go door to door on Halloween night asking for food and reciting verses while dressed in costumes.

They also warn of curses if they aren’t given a warm welcome.

Only Snoopy was there, and when Sally sees him, she becomes enraged at Linus for making her miss out on the Halloween festivities by making her wait in the pumpkin patch.

Answer: Count Wampyr. Vampires are referred to as wampyrs in German. While on summer vacation in 1890, Stoker saw the name Dracula in a book he took from the library and decided to use it for his character.

Answer: War of the Worlds. Orson Wells adapted the story from H.G. Wells’s original novel for a special Halloween episode of The Mercury Theatre on the Air, which he also directed and performed.

Because there weren’t very many listeners, it’s unclear whether or not it caused widespread hysteria and terror.

The first mass-produced individually wrapped penny candy in the United States, this confection had a light chocolate flavor.

Answer: Salt. In Hocus Pocus, Alison used a salt bottle as a weapon against the Sanderson sisters, and it worked…for a while.

Traditional folklore suggests that spreading salt about a room or region helps ward off bad spirits, but this isn’t limited to Disney movies.

To achieve the same effect, follow a Buddhist ritual and toss salt over your shoulder.

Even if a spoonful of salt is an inconvenience, it’s well worth the price of peace of mind on Halloween… or any night, for that matter.

Answer: Samhainophobia, a fear of Halloween that persists despite one’s best efforts.

During the month of October, be on the lookout for fear at every turn.

Seasonal fears including coimetrophobia, arachnophobia, wiccaphobia, and phasmophobia, are amplified throughout the Halloween season.

If you’re going to use silly string on Halloween night, stay away from the Hollywood area, especially Hollywood Boulevard.

Due to complaints from business owners, the messy toy was banned in 2004.

However, you can expect to pay a $1,000 fine if you’re caught with a can in your hand or a string in your hair.

Answer: The state in question is Alabama. Specifically, as per Section 13A-14-4 of the Code, “Fraudulently pretending to be clergyman.

Whoever, being in a public place, fraudulently pretends by garb or outward array to be a minister of any religion, or nun, priest, rabbi or other member of the clergy, is guilty of a misdemeanor and, upon conviction, shall be punished by a fine not exceeding $500.00 or confinement in the county jail for not more than one year, or by both such fine and imprisonment.

After taking a long bath, he walked back to his adjoining room with nothing but a cigar in his hand when he spotted Lincoln sitting by the fireplace naked.

You’ve put me in a bad position, it would appear.” Mr. Lincoln, it seemed, did little more than smile and then vanished.

Answer: Some folklore holds that if you dress inside out on Halloween and walk backward, you’ll see a witch at midnight if you follow the tradition.

Answer: Because they imagined it would land in the shape of their future husband’s initial letter.

Answer: People used to leave food or treat out on the streets on Samhain to appease the forces of evil.

Answer: Many people believe that Halloween’s practice of bobbing for apples honors Pomona, the Roman goddess of fruit and plants.

Answer: Right during the potato famine in Ireland in the 1840s, when there were many immigrants.

Answer: In order to avoid having to clean the machines between batches, the corporation will blend the leftovers from flavors A and B to create a new flavor.

In order to convey the flavor’s charisma, the wrapper features a question mark design.

Answer: The Irish, who invented the ritual, initially carved jack o’lanterns out of potatoes and turnips before discovering that pumpkins were much easier to cut.

Answer: The Exorcist got a remarkable ten Academy Award nominations in 1974, including one for then-15-year-old Linda Blair in the Best Supporting Actress category.

Halloween is a time of the year we all celebrate with family and friends. Kids look forward to the trick-or-treating part of the day.

However, not everyone knows much about this day.

We hope you enjoyed our top 50 Halloween trivia question and answer. For more articles below, scroll down.