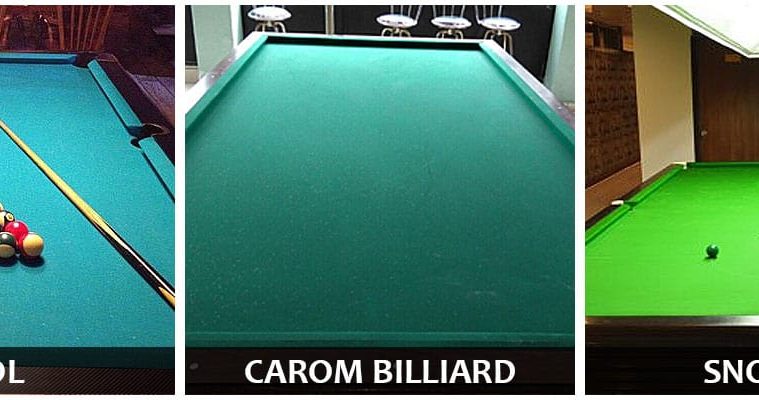 Snooker vs Pool — What’s the Difference?

The 3 games involve using a cue stick to hit billiard balls and consequently causing them to move around a cloth-covered billiards table, which is bounded by cushions or elastic bumpers.

Generally, cue sports are based on cue stick size, the number of balls, pockets, table size, and many other factors.

Thus, it’s not surprising if you consider “pool” as synonymous with “snooker” as some do. But the games aren’t really the same. Let’s highlight some differences between them.

Snooker vs Pool: A Quick Summary of the Primary Differences

Snooker vs. Pool: Their Shared History

Though snooker and pool share a common history and are collectively referred to as cue sports (along with billiards), they’re not exactly the same.

Skill games that make use of sticks for moving balls on a table have been existing as back as the 14th century, at least.

As they were frustrated they couldn’t play popular outdoor croquet-type lawn games during the whole year; nobles started moving the games indoors and engaged in playing miniature versions on specially built tables.

Those original games like the Royal Game of Fortifications have long been forgotten and don’t have anything in common with any current cue game.

Today, people often take pool, billiards, and snooker as the same game as a result of the time and place.

With time, the older cue sports evolved into newer cue games, such as snooker, pool, and pocket-less billiards.

In snooker, the object is to score the highest number of points when each game (known as a frame) ends.

You’ll score points by pocketing balls that are worth different values.

Snooker makes use of 1 white cue ball as well as 21 colored balls.

The red balls are 15 in total, with each of them valued at 1 point.

The remaining 6 other uniquely colored balls carry different points with the green ball worth 3, the yellow 2, the brown 4, and the blue ball 5.

When you sink the pink ball, you earn 6, while the black ball carries 7 points.

After the 1st player breaks, players will now attempt to pocket the balls in turns to score points.

Players have to alternate pocketing a red ball and then another color ball. If a player cannot sink a ball successfully, he/she will lose his turn.

All red balls will stay in the pockets. However, for all non-red balls, when each is sunk, it’s to be replaced on the table.

The frame ends as soon as all of the red balls have been sunk, or if a player got an overwhelming number of points that prevents his/her opponent from drawing level with them.

Typically, players play a fixed number of frames for determining who wins overall.

The most significant differences between snooker and the other cue sports are the scoring system designating individual balls with various values and the size of the table.

Generally, snooker tables are a lot larger compared with pool or billiard tables. A full-sized snooker table measures 12ft by 6ft, but its pockets are a lot narrower than those of pool tables.

Of the 3 types of cue sports, snooker balls are the smallest.

When most Americans come across the term “billiards”, a pool table is what naturally comes to their mind.

Pool tables outside the US are popularly called “pocket billiard” tables.

As a matter of fact, there isn’t a particular game that actually goes by the name “pool”. That common nickname you’re familiar with refers to the popularity of making use of pocket billiards to gamble for “pools” of money.

Instead, we’ve several different cue games that individuals can play on a pool table, with each of them having its own set of rules.

Here’s a handful of the most popular of such games: 8-Ball, Nine Ball, Straight Pool, 10-Ball, Cutthroat, Solids and Stripes, One Pocket, and Bank Ball.

Pool tables are a lot smaller in comparison with snooker tables that feature wider pockets and larger balls.

8ft by 4ft is the most common pool table size for a bar or gameroom in America. But in other regions around the world, the size of most tables is 7ft by 4ft.

That concludes today’s comparison article on snooker vs pool.

One Pocket Pool Rules And Gameplay

How to Play Straight Pool — Rules and Instructions