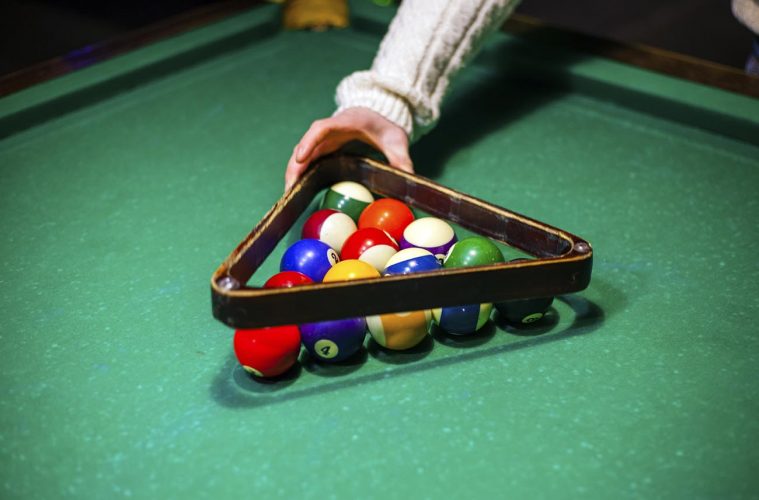 To get started in a cue game, one of the first things to do is to set up the table for play. Cue sports are of various types — the likes of 8-ball, 9-ball pool, straight ball pool, snooker, cutthroat pool — and all of them need a unique style of racking the balls.

Going from one pool or billiard version to the other, the number of balls varies, and that’s why the process of racking will always differ across the board.

A triangle rack, the most common style, lets you manipulate the balls so you can set up any kind of game you choose to play.

Rules for Racking the Balls

As you may probably know, players must follow specific rules to rack pool balls depending on the kind of game they’re playing.

Also, the number of pool balls and rack type are different.

Before we discuss these rules, please note that most pros recommend you use a racking template and tap the balls into place.

In certain tournament-level tables, you’ll even find the template on the table itself.

This could be the best method, but most people play at home, over a friend’s house, or a bar, mainly with the aid of the standard plastic/wooden triangle or diamond-shaped racks.

This approach is certainly the more common, and it’s the one we’re looking at in the rules below:

Racking a Game of Eight-Ball

15 object balls are racked in a triangle in 8 ball.

The eight ball has to be positioned in the center, and it’s the 1st ball, which lies directly below the apex ball.

As for the apex ball, it’s on the foot spot, and in most tables, you’ll see it marked.

Ensure there’s a stripe & solid in each bottom corner of the triangle. Also, the other balls have to be put in the triangle randomly without following any purposeful or specific pattern.

You can prevent clustering by ensuring there aren’t more than 2 solids or stripes in a row.

9-Ball is played using 9 object balls. These carry numbers 1 to 9.

In this game, the object is to pocket the 9 Ball.

As a result of the number of balls, it’s played using the rack that has a diamond formation.

If your chosen place to play has no 9-Ball diamond rack, you can find this formation difficult.

But the rack formation can be realized quite easily by using a standard triangle rack, and of course, with a bit of practice.

This rack formation has to be random, except for 2 pool balls. These are the 9 ball (to be in the center) and the 1 ball (to be placed at the apex).

Other than this, those 7 balls left are to be randomly positioned.

5 rows of pool balls will be in the diamond formation.

Please Note: If you don’t have a diamond rack, use your hands to force the balls tightly together to ensure they’re tightly racked in the formation within the triangle.

Here, players have to rack continuously throughout the game, and that’s because of the nature of the game itself.

Therefore, you must be consistent with your racking skills and have to always be “on-the-ball” (literally).

The easiest rack is the first one since you only have to put the 15 balls randomly within the triangle rack.

To start the game, put the apex ball on the foot spot.

Certain players will be accustomed to playing with the 1-Ball in the right corner of the pool rack, while the 5-Ball will be in the left corner of the rack.

This is not a formal rule, though, so the choice is entirely up to you.

This game is played continuously until a player attains a number of points agreed upon at the beginning of the game.

As a result of this, you’ve to keep on re-racking whenever fourteen (14) of the fifteen (15) balls have been pocketed.

Once only the 15th object ball is left on the pool table, the designated player or referee re-racks the 14 pocketed balls randomly, leaving the apex spot empty.

After getting the re-rack done, if you’re the shooting player, you’ll attempt pocketing the 15th ball, and then breaking the rack up at the same time.

If the 15th ball is placed on a spot where it’ll fall within the re-rack, you can put it in the rack and go on with your game.

Racking in this game is arguably the most complicated racking technique in all cue sports.

You’ve to be precise and accurate. Also, you must be versed in Sooner rules.

There’s an exact place that each of the balls has to be positioned. And that’s to be carried out carefully.

To get started, rack the 15 red balls into a racking triangle. Then, put them directly below the foot spot.

Ensure the pink ball is positioned at the apex of the triangle of reds, as close as possible to the triangle’s tip.

At the back of the triangle of reds, put the black ball directly center and roughly a ball’s width away.

The “baulk line” is on the opposite end of the table, close to the “head spot”.

This is often an imaginary line running from end-to-end horizontally across the table, around 29” from the end cushion.

This zone is referred to as the “baulk”, and there’s a semi-circle called the “D zone” in the center of the “baulk line”.

You’ll find, along the baulk line in front of the D zone, 3 colored balls lined starting with yellow on the right, brown in the middle as well as green on the left.

The blue balls are to be positioned directly in the center of the snooker table.

Though all this could seem confusing to you (and understandably so), it’s actually quite simple once you become used to it.

It only requires a bit of practice to get the hang of it.

Since Cutthroat pool is played using the same set up as eight ball, you’ll find many similarities in the racking process. But there’s a handful of small exceptions.

You’ll still make use of a standard 15-Ball triangle rack, with the balls being positioned within the rack randomly.

However, there are 3 balls, which won’t be positioned randomly.

The 1-Ball is to be put at the apex, after which the 6-Ball & 11-Ball will be positioned in either corner of the back.

Other than this, the balls won’t have any particular order as it can be any one you choose.

Also, when racking for Cutthroat Pool, there aren’t any special things to take note of, apart from what has been stated above.

Steps to Make a Tight Rack for All Pool Games

Whether you’re making use of a triangular rack or the diamond-shaped type, you always ensure that you make the tightest rack possible with little or no gaps.

Use These Tips with a Diamond Rack in 9-Ball

First put the 1-Ball at the apex of the rack, and allow the ball to settle into position.

After that, put the remaining balls behind the one ball, and position the 9-Ball in the middle.

The next thing is to push forward with the 2 hands and apply downward pressure to tighten the 9-ball rack.

If balls move out of position after tightening the rack, you can spin the outer balls towards the middle to produce some friction from the felt fibers and secure the rack slightly better.

If you can still see some gaps, you can change the pattern and rotate balls until you realize a tight fit.

But you shouldn’t take too long since you’re not expected to do this perfectly.

Remove the pool rack from the back first when it looks tight.

Also, consider lifting the back of the diamond straight up and sliding the front forward away from the apex ball.

For a Triangular Rack

As earlier stated, triangular pool racks are the most common type. It is the style you’ll come across in most cue sports.

Based on the rules of the specific game you’re playing, put the balls in the rack, as explained above.

Once you’ve got all the pool balls in position, in one swift movement, now slide the entire rack up to the foot spit to sock the balls into place.

After that, put them in the gap at the back of the last row of balls and push forward, applying pressure with your fingers.

Again, if you can still observe any gaps between the balls in the triangular rack; that could be as a result of the balls being a bit misshapen, warped or damaged.

Consider moving the balls around and rotating them to get a better fit.

Once the pool rack looks nice and tight, you can lift the triangle very gently from the back to front.

Ensure that while removing the rack, you don’t displace any balls. Based on the rules, you’re not allowed to touch the balls once the rack has been removed.

Therefore, make sure you get this right the first time.

Use of the Magic Rack

If you’re seeking to foolproof this procedure and get rid of loose racks totally, opt for the Magic Rack.

These are paper-thin plastic racks that sit flush on the pool table, enabling you to set up various Billiard games smoothly and tightly.

As a result of the make of the rack, the balls can sit stationary in a super tight formation. And they’re thin enough, ensuring they won’t intervene with the break.

Simply put it on the table, rack the balls, and then break. When the break is achieved, and all object balls are clear, you can now remove it.

Do I get 2 shots for a foul when there’s only the black ball?

If you’re on black, you only get a shot for any foul, even if your opponent still has colors left.

Why does a player rack, while the other breaks?

If it happens that the same player both racked and broke, he might consider setting it up to provide himself with an unfair edge.

It’s a modern variation of racks, which is designed using a thin material (typically 0.14 millimeter or less) containing precision cut-outs for holding the balls in position.

Why is a template rack important?

These are some purported benefits of template racks: a more consistent racking and their popularity has led to specific inclusion in profession rules.

During the break shot, template racks, unlike traditional racks, are left on the table and got rid of at the players’ earliest convenience.

This is why they’re almost never made use of in games where slow-breaking (that is, not creating a large spread of balls) is common, as it’s a lot more likely the pool rack will intervene with slow-rolling balls.

What’s the most common shape of a rack?

Cue sports are of diverse variations such as 8-ball, 9-ball pool, straight ball pool, snooker, cutthroat pool, and several others. All of them require a unique style of racking the balls.

The number of balls differs from one pool or billiard version to the other. For this reason, the racking process will always vary across the board.

The most common style, which is a triangle rack, allows you to manipulate the balls so you can set up any kind of game you intend playing.