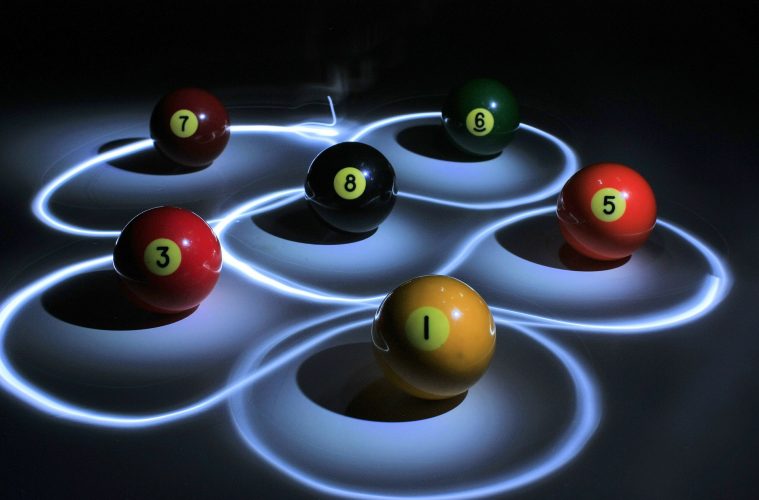 How to Play Cut-Throat Pool – Play Like a Genius

Cut-throat is a casual billiard game played with three people or five people on a pool table with a full custom set of pool balls (15 numbered balls and one cue ball).

A group of balls is allocated to you and other players with the goal of pocketing the balls in your opposing groups before they get the chance to swipe yours.

The ball sets can be given before the game starts or selected by a participant after the first shot in which he sinks a ball.

Any ball can be sunk to carry on with your inning (even those from your group).

From each opposing group, a ball is spotted if a player scratches, and the game proceeds with the next player with ball-in-hand.

How to Play Cut Throat Pool

Cutthroat is played with a set of usual billiard balls, numbered from 1 to 15, and the cue ball. The balls are divided into teams, and each player lays claim to their group.

Before embarking on the details and directives of this game, here are some basic premises to note:

If you’re eliminated in the course of the game, you can come back to the game if an opponent enacts a foul.

Now to some information and an overview of the typical regulations of Cut-Throat.

Before the beginning of the game, each player is assigned numbers that serve as the set of balls under their control.

Any random distribution of numbers can also be utilized, and it depends on the players to determine how they want to do this.

Now, it’s possible to select the groups before the beginning of the game; the only disadvantage is that you might pocket one of your balls when you go to break.

There are a couple of different means players can decide groups in Cutthroat.

Here are 3 regular options for you to pick from:

The conventional way is to pick a group only after at least one ball from two groups has been pocketed.

He would then select the 11-15 group because they have the most balls left.

The next player only has to pocket a ball before choosing which of the two remaining groups he wants to play with.

The simpler way is that the person who has just taken a break, supposing he had made a ball on the break, pockets one of the object balls on the table & then verbally declares which group he wants to belong to.

Once that player’s turn is done, the next person going up follows the same procedure and sinks a ball before picking which group they would like to have.

The remaining group would be designated to the last player.

For example, if the 1st person pockets one ball on the break, he can pick a group. The upcoming player to pocket a ball would then choose his/her group. And the third player would probably have the worst group on his neck.

Also, if the 1st player doesn’t sink any balls on the break, the player who pockets a ball next will be awarded first place in a group. And it continues in that manner.

Option 3: Assignment of Group Sets before the Game

Other players want to assign groups before the start of the game. Simply select your numbers and begin playing.

With given groups, however, breaking is not always an advantage. You could sink your balls with the first shot.

The Cutthroat rack is simple. All you need is a conventional triangle rack, then put the 1-ball at the topmost part of the triangle so that it sits on the base.

Put the six and eleven balls that go into one of the other corners. The remaining balls can be placed anywhere on the rack.

With Cut-Throat, the person who goes first must be able to carry out something called an “open break.”

This means that not less than 4 balls have to be driven out of the rack so that they touch the bolster on the sides of the billiard table.

This is done in such a way that the balls don’t get too cluttered in the center.

But, even if a person puts all the strength they have into a break, it’s still feasible that the balls will not get very far. If so, the players should ensure that the rack has been put together firmly.

An acceptable rack should look as if someone has glued the balls together with how close together they are.

If the player taking breaks doesn’t finish an open break, the next person can request a re-rack and try again.

Before you start the game, decide whether you will only play ‘called shots’ in your Cutthroat game.

This is an excellent idea when you’re playing with an advanced group of players. It essentially means that all the players have to determine which lands and what specific hole before each shot.

However, you don’t need to determine how the ball gets into the selected pocket (i.e., combos or benches).

If you accept to play called shots in Cutthroat, and then you put an opposing ball into an unintentional pocket, it’s regarded as an illegal shot, and the ball would be returned to where it was & the player would lose his turn.

This is also great if the players are capable of predicting the exact point their ball will go.

How to Shoot a Legal Shot in Cutthroat

For a legal Cutthroat shot, you must first touch the opponent’s ball and then make contact with a cushion with at least one ball.

This is to ensure players don’t try to put the ball into a terrible position for the next player going up with a super weak shot.

If you sink an opponent’s ball in an illegal shot, the ball is spotted, and your turn is over. These also lead to a foul.

Fouls and Penalties in Cutthroat

There are a few means in which you can commit a foul in Cutthroat.

However, if you let one of your balls jump off the table, you just look at that ball. If you jump over the cue ball, it would be considered a scratch.

The penance for foul play is that one ball is returned to the table from each ball your opponent pocketed. This means that a player who had been eliminated can now return to the game.

If not, one of your opponents pockets any balls at the time of the foul, ignores the penalty, and the next player takes the shot.

Scratching is especially crucial with Cut-Throat due to what it represents for the other players.

If a player causes a scratch on the white ball, be it by jumping off the table or pockets it accidentally, the other players on the table may put one of their sunk balls back into play.

If the other players have no balls in their pockets, they don’t do anything and wait for their turn.

The player following the person who has just scratched then places the cue ball at the back of the head string in any position he likes and plays his turn.

Cutthroat is a relatively simple game, but it can be a lot of fun, very competitive, and there is undoubtedly some advanced game plan when skilled players are involved.

It’s also an excellent option for groups of friends looking for a competitive way to play pool while ensuring that no one is left out.

There are also some possible differences in this game that work well with large groups of players.

I exceptionally recommend playing this game at least once, as there’s nothing funnier than feeling like the game is done for you, and your friend’s mistake puts you back in the game.

Snooker vs Pool What’s the Difference?