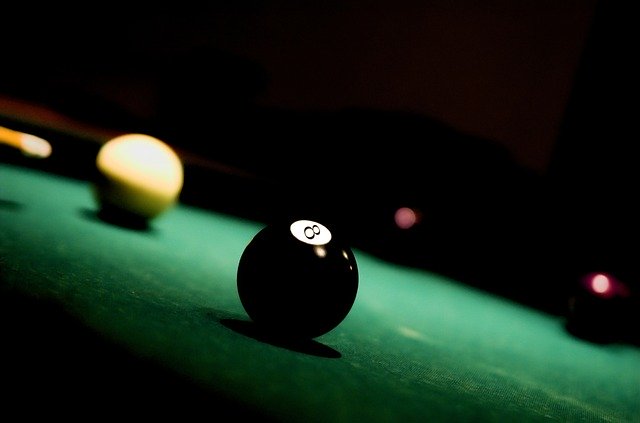 How to Play 8-Ball Rules & Instructions

Pool is a popular game with millions of players all around the world. But it’s many different varieties, with all of them having unique rules and regulations.

The most popular versions of pool are those that originated in the United States, which are called 8-ball and 9-ball pool.

The two are played on a normal-sized pool table that contains the regulation 6 pockets. Also, both types have multiple championships in different parts of the world.

But the more common game of the two is 8-ball. That’s the version you’ll most likely come across being played at your local pool hall.

Also, when the term “pool” is mentioned, it’s 8-ball that first comes to the mind of most people.

Becoming the best at this game isn’t so straightforward as it requires skill, time, and dedication. Fortunately, this guide will simplify things for you as you learn how to play 8-ball.

The object balls are 7 solid-colored balls, which carry the numbers 1 through 7, in addition to 7 striped balls with the numbers 9 through 15, and the black 8 ball.

Once the balls are scattered using a break shot, a player is allotted either the group of striped or solid-colored balls after they’ve pocketed a ball legally from that group.

In eight-ball, the aim has to do with pocketing the 8 ball legally in a “called” pocket.

This can only be done once all the balls from the assigned group of a player have been cleared from the pool table.

8-ball is the most frequently played version of pool. It’s typically regarded as synonymous with the word, “pool”.

This game comes in several variations, most of which are regional. After nine-ball, it’s the 2nd most played professional pool game and has remained so, ahead of straight pool, for the past numerous decades.

How To Play 8 Ball Rules and Instructions

You’ll need these pieces of equipment to play this game:

How to Score Points

In pool, there’s no score as such.

This is because the 2 players will simply try to pot all their designated object balls. After that, they’ll attempt to pot the 8 ball into the pocket they’ve selected.

But people typically play pool matches over a number of games. For instance, in the best of a 9-frame match, whoever first reaches 5 frames wins.

You’re declared the winner of an 8-ball pool game when one of the following takes place:

When it comes to the rules of pool, there are slightly differing variations being used in various countries, areas, cities, and organizations.

But the World Pool Billiard Association (WPA) have created a standardized set of rules that amateurs and pros can follow to play 8-ball.

Racking of the balls

The balls will be racked in a triangle, which you can find at the foot of the pool table. The 8-ball is to be in the center of the triangle, while the first ball of the rack is to be put on the footspot.

As for a stripe ball and a solid ball, these are to be in the 2 opposite corners of the rack.

Here, there’s no need to point out obvious balls & pockets.

Your opponent has the right to request to know which ball and pocket if he/she isn’t sure of the shot.

Bank shots and combination shots aren’t to be regarded as obvious. Also, care has to be taken when calling the object ball as well as the intended pocket.

When you’re calling the shot, you’re never required to state details like the number of cushions, caroms, kisses, banks, and others.

Any balls that get pocketed on a foul will stay pocketed, irrespective of whether they’re for the shooter or the opposing player.

The opening break isn’t to be considered as a “called shot.”

Any player that takes a break shot in eight-ball could continue with the next shot since he/she has pocketed any object ball legally on that break.

The player that won the lag may break. Players can have alternate break on each subsequent game during individual competition.

“Cue ball fouls only” remains the rule of the game when a match isn’t officiated by a referee.

But you need to know that it’ll be seen as a cue ball foul if — while trying to jump, curve or masse the cue ball around or over an impeding numbered pool ball (not a legal object ball) — the approaching ball moves (irrespective of whether it was moved by a bridge, a hand, or a cue stick follow-through).

To perform a legal break, the breaker (holding the cue ball behind the headstring) has to either pocket a ball or drive a minimum of 4 numbered balls to the rail.

Failure to carry out a legal break, the player commits a foul.

And his/her opponent can accept the table in position & shooting, or make the balls re-racked, and with an option to shoot the opening break himself/herself or let the offending player perform the break again.

Object balls jumping off the table on a break shot

On a break shot, if you jump an object ball off the table, you’ve committed a foul.

And the next player can either accept the table in position & shooting, or take cue ball in hand behind the head string & shooting.

Pocketing 8-ball on the break

If the 8-ball gets pocketed on the break, two things can happen. It’s either the breaker asks for a re-rack or try to identify the 8-ball spotted to continue taking the shot.

If the breaker does scratch while pocketing the 8 ball on the break, the next player can either re-rack or have the 8 ball spotted and start shooting with ball in hand behind the headstring.

The table is called “open” when the selection of groups (solids or stripes) is yet to be made.

When the table becomes open, it’s allowed for players to strike a solid first to create a stripe or vice-versa. You should bear in mind that the table is always open instantly after the break shot.

When the table becomes open, it’s allowed to first strike any stripe or solid or the 8 ball while trying to pocket the called solid or stripe.

But when the table becomes open and the 8 ball is the first ball you can make contact with, the shooter may not earn any solid or stripe.

And he/she will lose his turn. Any balls that have been pocketed will stay that way.

And the next player deals with the balls with the table still open. All illegally pocketed balls on an open table will stay pocketed.

On every shot (except the one on the break and an open table), the shooter has to first hit one of his group of balls and they can either pocket a numbered ball, or make the cue ball, or any numbered ball to touch a rail.

For tactical reasons, you could elect to pocket an obvious object ball and also put a stop to his/her turn at the pool table by stating “safety” in advance.

A safety shot is considered a legal shot.

If the shooter wants to pocket an obvious object ball in a bid to play safe, then before taking the shot, he/she has to declare a “safety” to the opposing player.

If this isn’t done, and one of the object balls of the shooting player gets pocketed, the shooter must retake the shot.

Any ball that gets pocketed on a safety shot will stay that way.

A player is qualified to keep shooting until he can’t pocket a ball of his group legally.

Once a player has pocketed all the balls of his/her group legally, he’ll be required to shoot to pocket the 8 ball.

Penalty for committing a foul

The opponent will have a cue ball in hand, meaning the player can put the cue ball in any part of the table. So, it mustn’t be behind the headstring except on opening break.

Due to this rule, a player can’t commit fouls intentionally to gain an unfair advantage over his/her opponent.

The player, with “cue ball in hand,” could make use of his/her hand or any part of the cue (such as the tip) for positioning his/her cue ball.

When putting the cue ball in position, if there’s any forward stroke motion touching the cue ball, it’ll be seen as a foul, once it’s not a legal shot.

An object ball is regarded as illegally pocketed when any of the following happens:

If any object ball jumps off the pool table, in 8-ball, the player loses the game. Any jumped object balls will be spotted numerically based on General Rules for spotting balls.

When shooting at the 8 ball, a foul or a scratch won’t amount to a loss of game if the 8 ball isn’t jumped or pocketed from the table.

The next player will hold cue ball in hand. A combination shot is never allowed to be used for legally pocketing the 8 ball.

If, after each player makes three consecutive turns at the table giving a total of 6 turns, the referee judges (or if there’s no referee, the 2 players reach an agreement) trying to move or pocket an object ball causes the loss of game, the balls will need to be racked again using the initial breaker of the stalemated game breaking again.

This stalemate rule could only be used when you’ve just 2 object balls and the 8 ball left on the table. Do bear in mind that 3 consecutive fouls by a player doesn’t mean they’ll lose the game.

8-ball and 9-ball are the most popular versions of pool and have their roots in America.

The two games are played on a normal-sized pool table containing the regulation six (6) pockets and have multiple championships in various places in the world.

But 8-ball is the more common pool version, and that’s the type you’ll most likely encounter being played at the pool hall in your locality.

Eight-ball has a variety of names, such as 8-ball, eightball, spots and stripes of highs and lows, solids and stripes.

The game is a pool billiards, played on a billiard table that makes use of 6 pockets, cue sticks, along with 16 billiard balls (1 cue ball & 15 object balls).

Following the tips outlined above in this post, you can learn how to play 8-ball.

How to Play 9ball Pool Game

How to Get Better at Pools Fast