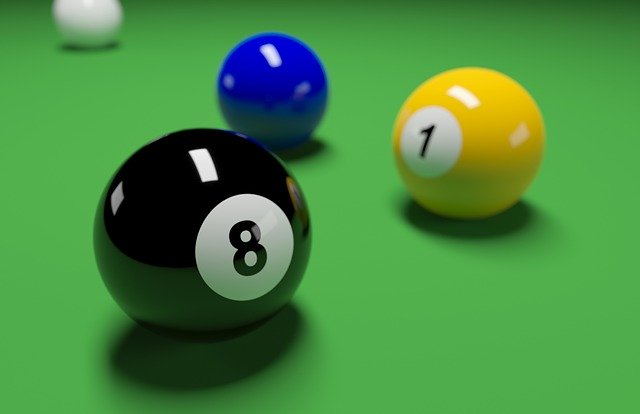 Pool, also known as the game of billiards, has a long and rich history.

It has been played by kings, presidents, lunatics, commoners, gentlemen, ladies, and hustlers alike.

What is the history of pool? Read on as we explore the historical facts about this popular game.

Billiards: Definition and How It Started

Billiards started as a croquet-like lawn game that was played in Northern Europe sometime in the 15th century.

From that point on, it has evolved into the current style of billiard/pool table and rules.

The term, “billiard”, stemmed from the French language, either from the word, “billart,” one of the wooden sticks, or “bille,” a ball.

Since the early 1800s, it has been known as the “Noble Game of Billiards”.

In 1600, the game of billiards was so familiar to the public that Shakespeare mentioned it in his play “Antony and Cleopatra.”

From Mace to Cue

In the original game (when the game was first moved indoors), instead of hit, the balls were pushed with wooden sticks called maces.

The cue stick was engineered in the late 1600s. When the ball was near a rail, due to its large head, the mace was very impractical to use.

In cases like this, the players would twist the mace over and hit the ball with its handle.

The handle was called a “queue”, meaning “tail” from which we got the word, “cue”.

For years, only men were permitted to make use of the cue. But women were compelled to use the mace because it was thought that they would rather tear the cloth with the shaper cue.

At one point, someone used chalk to increase friction between the pool ball and the cue stick and noticed a considerable development in their performance.

By the 18th century, the leather cue tip was developed in Europe, which made it possible for a player to add a side, top, or even backspin to the ball.

All pool cues used to be a single shaft until the two-piece cue arrived in 1829.

Pool tables initially had flat walls for rails that function as a preventive measure to keep the ball from falling off.

They were formerly called “banks” as they vaguely look like the banks of a river.

The pool players discovered that the balls could ricochet off the rails and began to aim them intentionally. Thus, the “bank shot” was created.

Here, the pool ball is hit toward the cushion with the intent that it will bounce off a cushion as part of the shot — perhaps even 3, 4, or 5 rails, and end up in the pocket.

Until around 1835, the pool table bed was wood, and slate became famous because of its durability for gaming and since it doesn’t warp like wood over time.

Goodyear discerned the process of vulcanizing rubber in 1839, and by 1845, it was used to make billiard cushions.

As far as the size of pool tables is concerned, a length to width ratio of two to one became the standard in the 18th century.

Prior to that, there were no permanent table measurements. By 1850, the billiard table had developed into its present shape.

Pool equipment improved rapidly in England after 1800, mainly due to the Industrial Revolution.

The term, “pool”, implies a collective bet or ante. Lots of non-billiard games, like poker, include a pool, but it was the pocket pool the name was associated with.

Furthermore, “pool room” today refers to a place where the pool is played, but in the 19th century, it was a horse racing betting shop.

Pool tables were installed where guests could spend time between races.

The two were joined in the public mind, but the unappetizing connotation of pool room came from the bet that took place there, not from billiards.

In Great Britain, from about 1770 until the 1920s, the main game of billiard was “English Billiards,” which was played with 3 balls and 6 pockets on a large rectangular table.

The tradition of the British billiard is continued today mainly via the game of Snooker.

Snooker is a complex and colorful game that combines offensive and defensive aspects and is played with the same equipment as English Billiards but with 22 balls, instead of three.

American Four-Ball Billiards was the principal American pool game in the United States, until the 1870s, when it was usually played on a large (11 or 12-foot), four-pocket table with four pool balls, two white and two red.

This was a direct continuation of the English Billiards. Points were scored by sinking balls, scratching the cue ball, or by making carom on 2/3 balls.

Whenever we look at the history of pool, to do justice to the topic, we must examine carom.

Carom is an act of two object balls hitting the cue ball in one go. With many balls, there were lots of different ways to score, and it was possible to hit up to 13 pints with a single shot.

American Four-Ball gives off two offspring, both of which outshined their popularity in the 1870’s.

One of the games in which simple three-ball caroms were played on a pocketless table was the so-called “Straight rail,” which was the forerunner of all carom games.

The other typical game was American Fifteen-Ball Pool, the precursor of modern pocket billiards.

Fifteen-Ball Pool was played with 15 object balls, numbered 1 to 15. For pocketing a ball, the player gets several points that correspond to the value of the ball.

The aggregate of the ball values in a game is 120, meaning the 1st player who received more than half the total, or 61, wins.

Later in 1888, it was considered fairer to count the number of balls a player pocketed rather than their numerical value.

With this, Continuous Pool interchanged Fifteen-Ball Pool as the championship game.

The player, who pocketed the last ball of a rack, would break the next rack, and his score would be “continuously” maintained from game to game.

Eight-Ball was conceived shortly after 1900; straight pool followed in 1910. But Nine-Ball appears to have developed around 1920.

While all the games played on a billiard table are referred to as “billiards”, with or without pockets, some people understand billiards to be just caroming games and use pool for pocket games.

In the 1930s, both pool and billiards, especially three-cushion billiards, were in the limelight.

Pool & billiard championship tournaments were held almost every year from 1878 to 1956, with the remaining months being filled with individual matches.

At times, even during the Civil War, more was reported about billiard results than about war news.

The players were so well-known that cigarette cards were issued with them. As a popular recreational activity for the troops, pool went to war several times.

Professional players visited military posts and gave exhibitions; some even of them even worked in the defense industry.

That concludes this piece on the history of pool.

How to Play 8-Ball