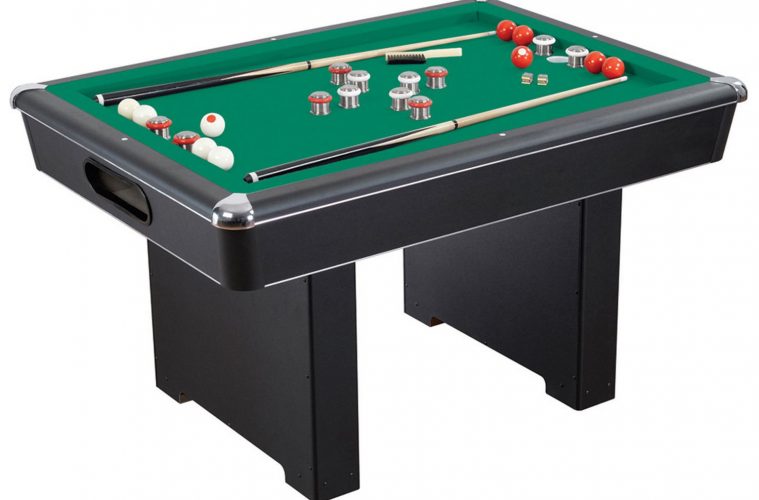 Bumper Pool Rules – Most Important Things You Need to know

Bumper Pool is a pocket pool game that is played on an octagonal or rectangular table. This table has a series of solid, padded obstacles, known as bumpers, within the interior of its surface.

Also, it features the same fabric cover as a standard billiard table. In contrast with other pool table types, these have only 2 pockets.

Bumper Pool can be played in teams of 2 or 4 players. Each side has 5 red or 5 white balls, and one ball of each color is marked as cue ball.

To lay out a bumper pool game, position two red balls on both sides of the white cup (pocket) on the markings, with the marked red ball placed right ahead of the white cup.

Put the white balls in an identical position on all sides of the red cup (hole).

The Goal of Bumper Pool

To win the game, the 1st player or team has to sink all 5 balls except if the last shot is placed in the opponent’s cup. In this case, the game is lost.

The two players simultaneously shoot the marked ball, first hitting the side pillow, then shooting the ball in or near the colored cup. The player that shoots his ball in or near his cup plays again.

1. Bumper Pool involves 2 players or 4 players as a team.

2. There are five red balls or five white balls on each side, in which one of each color is a marked cue ball.

3. To configure a Bumper Pool, put two red balls on all sides of the white cup. Set the white balls in the same way surrounding the red cup (pocket).

4. The two players simultaneously shoot the marked ball, hitting the side cushion first and shooting the ball in or near the colored cup.

The player who shoots his ball inside or nearest to the cup plays again. Cue balls that are marked have to be pocked first.

If a player pockets some other ball before pocketing his marked ball, his opponent can take two of his own balls and place them inside his cup.

In case both marked balls are put in the pocket on the first strokes, each player selects one out of the remaining balls and places it in front of the cup.

Then, the 2 players shoot simultaneously, just like with the marked balls.

From then on, they alternate, starting with the player who sinks his ball or is closest to his cup.

5. A player gets another chance when he pockets his colored ball into his own colored cup.

6. If a player makes a ball get off the table, his opponent can place that ball in any place and also take 2 of his own balls and place them into his cup as a bonus.

7. If a player pockets a ball belonging to his opponent, no penalty is awarded.

8. No player may jump his ball over balls or bumpers when shooting with his ball. This carries the same penalty as in Rule 7.

9. The winner of the game is the 1st player or team that pockets all five balls, but the player loses the game if he scores his final ball into the cup of his opponent.

10. The house rules regulate the duration of how long the winners may continue to play.

How big does the room have to be to play bumper billiard tables?

The room only needs to be as large as 10′ x 10′ because the table is small, and the cues are usually 36 inches compared to the standard pool stick that measures 57 inches long.

How much fabric do I need for slate bumper pool table

For a slate bumper billiard tables, 1.5 meters of fabric is required. They can be bought anywhere from $20–$30.

What size cue should I choose for a bumper pool table?

Standard pool cue is 57″, but a bumper billiard table is smaller, so you should choose 36″, 42″ or 48″ depending on your preference.

And that brings today’s post on Bumper Pool rules to an end.