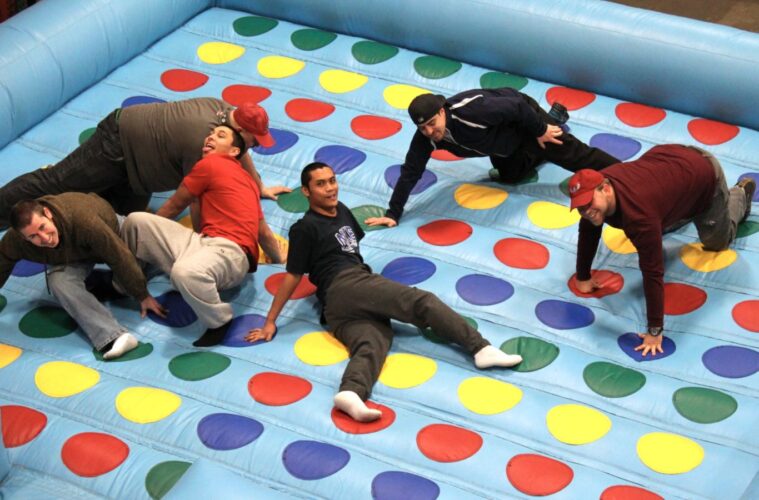 If you’re being honest, you’d have heard about playing the twister game at least once in your life.

Twister, for those unfamiliar with it, is a fun physical skill game that involves strong balance and utilizes body parts as playing components.

It was initially called ‘Pretzel’ and has been around for more than 50 years.

If you’re interested in learning more about the Twister rules, you’ve come to the right place!

Twister was created by Charles Foley and Neil Rabens in April 1966. It was one of the earliest games to incorporate human body parts as pawns or play pieces.

First-year sales surpassed 3 million copies! The title is marketed and sold under the Hasbro/Milton-Bradley name.

When it comes to balance games, there’s no better than Twister.

While this game is best played with others, you’ll find yourself in some strange positions during your time playing.

Place the mat face up on a flat surface.

Players remove their shoes and place them on the ground. If you’re going to be playing outside, you might want to use your shoes to secure the mat corners.

Choose who to act as the referee. The referee is not a player; they will spin the spinner, call out the moves, and watch the play during the game.

Use the details below to arrange yourselves on the mat according to the number of players.

In a two-player game: Players face one other from opposing ends of the mat, near Twister.

One foot should be on the yellow circle and the other on the blue circle nearest your mat’s end. On the other hand, your adversary does the same thing.

In a three-player game: place two players on opposing ends of the mat, close to Twister.

Each participant should place one foot on the yellow circle and the other on the blue process most relative to their end of the mat.

For example, from the red-circle side of the mat, the third player faces the center, placing one foot on each of the two central red circles.

The referee spins the spinner and then announces the body part and color indicated by the arrow.

For instance, the referee might announce, “Right hand, red.” All players must next attempt to follow the referee’s commands simultaneously, as detailed below.

For instance, if the referee signals “Right hand, red,” each participant must strive to place their right hands on any empty red circles

A circle can never include more than one hand or foot.

The referee will have to determine which player entered the ring first in a tie.

For the other players to continue, they must find an empty circle of the same color.

The only time you should remove your hand or foot from a circle is if the refree tells you to after a spin.

Provided the referee is informed beforehand, the hand or foot is returned to its circle as soon as possible.

Suppose a color’s six circles have been entirely covered.

In that case, the referee must spin again until a different color may be called out.

Move toward an opponent’s portion of the mat, forcing the player to go over or under you to place a hand or foot!

One must eliminate all other players one at a time to win Twister. The following are a few ways to get ejected from the game:

Any participant who falls unintentionally removes a body part from the circle or touches the mat with their knee or elbow is immediately dismissed from the game.

A player may exclude themself if they believe that learning a new position will be too difficult.

In a two-person game, the fallen player is eliminated, and the surviving player wins.

Next, the dropped player is removed in a three-person game.

The remaining two players continue playing until one is eliminated. At this point, the remaining player is declared the winner.

Finally, suppose one player falls or contacts the mat with a knee or elbow during a four-person game. In that case, the team is eliminated, and the opposing team wins.

To win the game, you must be the last player on the mat and prevent elimination.

The following are the most effective strategies for increasing your odds of winning at Twister:

Preliminary stretching. It is critical to warm up before playing, much more so if you are unfamiliar with bending your body into strange postures.

By pre-warming up the muscles, you will be able to hold the poses for longer, boosting your chances of winning!

Maintaining equilibrium. Outlasting your opponent is essential to win this game.

Therefore, strengthen your balance by keeping your feet firmly planted on the mat and not too far apart.

Additionally, keep a stable center of gravity and avoid leaning too far over.

Finally, keep your motions as close to your torso as possible to maintain stability.

Keep a keen eye on your adversaries. With each new action, attempt to get your hand or foot as close to your opponents as possible.

This reduces the number of circles they can easily access, forcing them to reach further and certainly causing them to fall.

Outlast your adversaries. If you maintain a loose and limber position, stay close to your opponents, and maintain your balance!

This way, you’ll almost certainly outlast your opponents and win the game!

Additionally, remember to be patient, play pretty, and have fun.

Being a good sport, having an excellent time, and enjoying the company of others are all components of winning.

If you’re playing with four people, divide into two groups of two each.

Teams stand side by side, one foot on each of the four circles closest to the Twister name, facing each other at the opposite ends of the mat.

The referee spins the spinner and shouts out a hand or foot and a color circle just as in a two- or three-player game.

As with the two- or three-player game, members of the same team can cover the same ring with one hand or foot.

When a player falls or contacts the mat with an elbow or knee!

The team is eliminated, and the opposite team is declared the victor.

2-Player Game with No Referee

If there are only two players and no referee present, the game can be played without the spinner.

Instead, one player identifies the body component, while the other determines the circle color.

Otherwise, the game is identical, with the winner being the last player standing.

Blindfolded players must use only their sense of touch and memory to play this twist on conventional Twister.

To discover the correct color (with their hands or feet), players must stomp about the mat until they reach the right texture and shape.

Multiple players join teams of two and compete in a tournament-style format in this edition.

Teams compete against one another in a round-robin format, recording wins and defeats.

The competition is won by the team with the most wins overall.

First, each team plays the other until only the top two winning teams remain.

Then, these last two teams compete against one another until one is eliminated. The winner is the last team standing.

How much area do I need to play Twister?

It varies depending on the version, but the standard size mat is around 6.5 feet by 5 feet.

Additionally, ensure no valuables are nearby before you begin playing — flailing limbs may be pretty dangerous.

Is it possible for me to injure myself while playing Twister?

Although the game requires you to be in some unusual postures, you should avoid injuring yourself or others if you exercise caution.

Be cautious if you’re playing with a variety of age groups.

For example, if you’re older and heavier than the other participants, you risk damage if you land awkwardly on someone.

Twister is perhaps one of the best party games available!

It’s a lot of fun to play indoors or out, and all you need is a flat surface and the game’s mat and spinner!

Therefore, why not gather your family and friends for a game of Twister? Everyone is sure to have a great time! Best of luck!