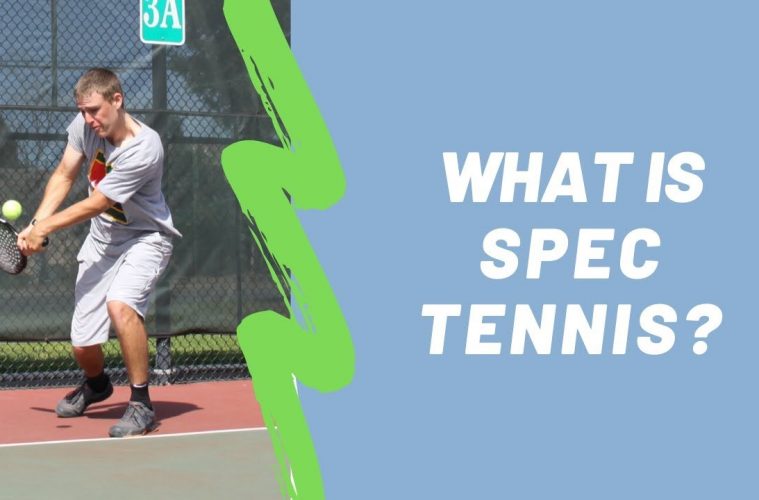 What Is Spec Tennis? Rules and Basic Game Instructions

Here, there is no such rule of “no volley zone”, thus bringing about a more unique and quick-paced game with a true feel of real tennis.

Spec Tennis creates a competitive option for regular Tennis players because not all these players are interested in playing Pickleball.

Unlike pickleball, Spec Tennis currently uses a 50% low compression Wilson Orange Dot Tennis ball, even though it is believed to be not so easy to learn when compared with Pickleball, but somewhat easier to understand than Tennis.

In Spec, the same strategies and strokes of regular Tennis are very much applicable here as well as hitting slice and topspin. You just need to stay mindful of the length of the court.

The idea of Spec Tennis originated from Nate Gross, a professional Tennis trainer in California. He has played both Division 1 college Tennis, paddle Tennis as well as pickleball.

However, he decided to experiment more on these specialty sports that later birthed Spec Tennis.

In the process, he designed the rules and scoring mechanism.

So, it can be rightly said that Spec Tennis is a hybrid of four sports forming one, fusing the essentials from regular Tennis, Pickleball, Platform Tennis and Pop Tennis.

In the real sense, all these sports give a lot of fun, but Nate leveraged their downsides. Pickleball courts are known to be small, and the balls are quite fast too.

Platform Tennis is well known on the east coast. However, it has more specialized courts, and building them can be really expensive.

The Orange Dot ball used in Spec is a perfect fit because it allows everyone, either kids, seniors or the top level players, to have easy control.

Away from the court and ball variations: Spec and pickleball allow up to 16 players at once on a standard Tennis court, which translates to 4 courts on 1 Tennis court.

Spec Tennis differs from other paddle sports in rules but still shares some similarities with them.

One that is very key among the rules is the “no two-bounce rule”.

What this simply means is that whoever is serving can do so and can still go right towards the net to volley.

When playing Spec Tournament, the server gets a single-serve, and he/she must stand with one foot on the service mark, 4 feet behind the intersection of the sideline and baseline.

The same server will serve each point for the current game.

And this service must land crosscourt and be underhand at the same time, although having one foot on the service mark when serving is one of those things that makes it harder to serve and volley at the same time.

One implication of this is, it will restrict the server from getting so close to the net for their slice of first volley as compared to when they serve just from behind the baseline.

However, in the case of rec play, it is not compulsory for the server to stand 4 feet back once he has 1 foot behind the sideline.

Rules regarding the scoring system in Spec is that of No-Ad Tennis scoring, and the first team to get 4 points wins the game.

To win a set, the team needs 4 wins. Also, there is no tiebreaker in scoring.

Players are not confined to a particular area, unlike pickleball. They are allowed to stay near the net as much as possible.

The same rule is applicable for both singles and doubles. However, in doubles, a distinct Serving Order must be put in place.

For any team to earn points from the returning service, the shot served must land in the appropriate box, and the opponent must maintain the exact position to initiate the points for the game started.

This means when the server serves from the right side, the opponent must stay on the left side, and the game should then go on like this to prevent the same player from having a hit each time.

In Spec Tennis, different on-court strategies are allowed. Even though the approaches are vital, but they don’t always translate to the expected result.

What is most important when playing Spec Tennis is for the player to play as an all-court player and take on every hit from the baseline towards the net.

Having good defense is yet another key aspect when the player is around the net.

Spec actually allows for strategy mix, and that, thus, brings about the true feeling of Tennis.

For instance, some players will serve and volley; some will play largely from the baseline, while others will do the mixture of both at the same time.

Moreover, players make use of certain formation techniques in doubles. They include 1 up 1 back and 2 up 2 back formations.

Playing against the players, who are near the net from the baseline, is not really a bad idea.

There are truly a lot of fascinating aspects to Spec Tennis, and these are some of the reasons young players are interested in the sport.

National Tournaments are held in Santa Rosa, California, in August. If you find the sport appealing, you too can give it a try.

How to Learn Axe Throwing Game