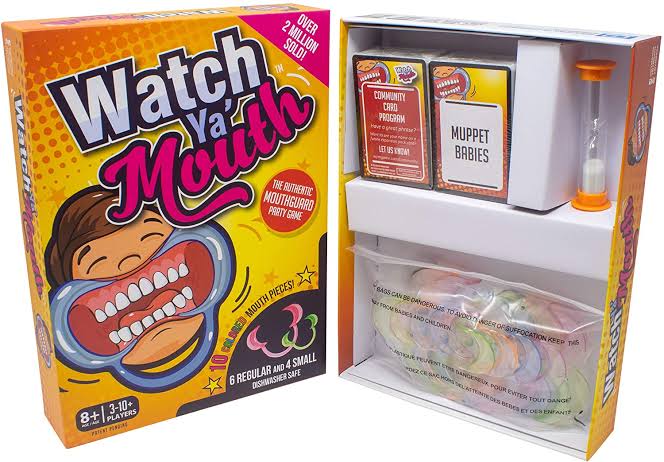 Depending on the specific edition of the game you’re playing, Watch Ya Mouth rules vary slightly.

Have you ever experienced talking to a friend saying something only to realize that what you heard is different from what they said?

Watch Ya Mouth is a funny game that compels you to utter things that people will entirely misunderstand. Also, it has these comical mouthpieces that add to the hilarious effect of the game.

If you don’t mind appearing a little ridiculous and flashing your teeth, then this game is for you.

It’s so entertaining you will be feeling pains in your stomach from laughing too much because you’re trying to comprehend what your partner is saying with the guard in their mouth.

Without a doubt, this is a great party game to share with your friends and family. Let’s learn more!

Watch Ya Mouth – Rules and Walkthrough

Watch Ya Mouth is a one-of-a-kind charades game with a twist. It requires you to wear mouthpieces while saying something. This title is designed to be played in teams. The game is designed for team play.

One participant must wear a mouthpiece and say whatever is on their card. Then, the teammates must guess the word correctly as this will earn them a point.

Do you think you can talk while wearing a cheek retractor without sounding odd?

To play this game, you will find the following in the pack:

The game’s goal is to pronounce the word correctly to help your teammates understand what you’re saying. For a more fantastic effect, four or more players can play it.

The setup is straightforward. First, you’ll need to assemble all of the game’s components and gather the participants.

Following that, the players will be separated into two equally sized teams. Then, pick which team will go first and who will attempt to articulate the words. After you’ve sorted the sequence, you can begin playing the game.

To enjoy this game, each team must have a minimum of two players. If the number of players is odd, they can be divided into unequal groups.

One player will be assigned the reader’s position, who will be responsible for reading the words and phrases and correctly pronouncing them while wearing a mouthpiece. At the same time, the remaining teammates will try to guess the word properly.

After each round, players will be required to switch roles. As soon as the reader is fitted with a mouthpiece, the game’s countdown begins.

Within sixty seconds, the translators will attempt to guess as many words and sentences as possible. Each correct interpretation results in a point for the team.

A member from the opposing team will verify the integrity of the interpretation.

Additionally, the game includes certain bonus cards with more complicated words than the others. However, because of its difficulty, it earns two points.

If the reader believes the sentence is too tough, they may omit these additional cards. At the end of the final round, the team with the most points wins the game!

Watch Ya Mouth has at least four rounds, where each team is given 60 seconds to say the word on as many cards as they can to get high points. Once both teams have had their turns, the round is complete. This is performed three more times throughout a standard game

After all rounds are completed, the team with the highest points wins. If a tie occurs, the players can play another match until one group emerges as the winner.

You can wash with hot water and soap. Alternatively, boil in the dishwasher for 3-5 minutes (Top rack only)

Is it possible to reuse the mouthpiece in Watch Ya Mouth?

Definitely, you can reuse the mouthpiece since it’s washable.

Is it possible to play Watch Ya Mouth without using teams?

No, this is a team game. So you’ll have more than one person to play with as each team must have a reader and two or more interpreters.

Can children play Watch Ya Mouth?

Yes, this is an enjoyable game for players of all ages. In addition to this, children can use this game to practice new words and phrases.

Watch Ya Mouth is a hilarious game that requires little to no skills to play. All you need is to follow the guidelines and get enough plays, and you’re good to go.

One beneficial fact is that it can be incorporated into family game night, as it comes with mouthpieces for children. So if you need a pick-me-up game, Watch Ya Mouth is the suitable title for you.

Best Games for Your Room – Exciting Fun Games For You