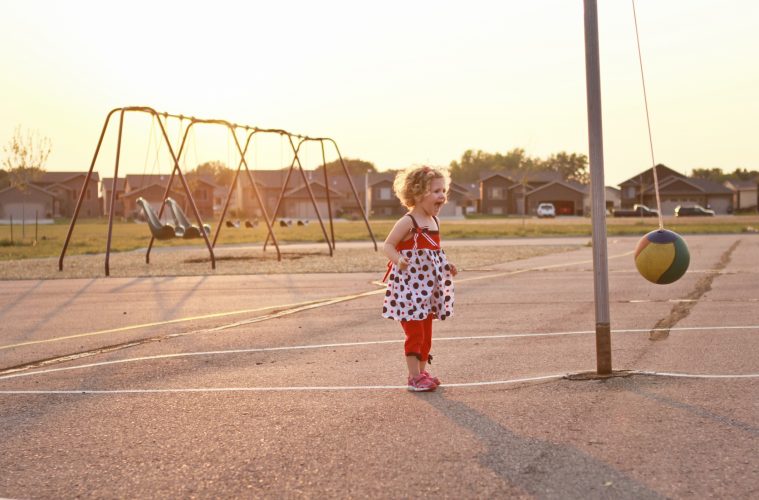 Tetherball comprises a volleyball attached to a rope that’s tied to a center pole. It’s a game for 2 opposing players.

A 20-foot circle often serves as the playing circle, where each player is allotted one-half of the circle. Tetherball can also be played using a smaller ball, which is attached to a rope and struck using paddles.

Though it’s not officially recognized as a sport, the game is usually regarded as an outdoor activity. The equipment to play consists of a stationary metal pole, from which a volleyball from a tether or a rope is hung.

The 2 players in the game will stand on opposite sides of the pole. Each of them will try to strike the ball one way, one clockwise, while the other counterclockwise.

The game comes to an end when one player winds the ball all the way around the pole till it‘s stopped by the rope. And it mustn’t bounce.

In an early variation of the Tetherball game described in Games for the Playground, a 1909 book by Jessie H. Bancroft, a tethered tennis ball is struck by racquets. The variant also has similar rules with the traditional version of the game.

Equipment of the Game

It requires the following pieces of equipment:

The ball has nearly the same size and weight as a volleyball. However, it’s a bit firmer unless you specifically opt for a soft tetherball.

Tetherballs often come with a bar recessed in the top, which the rope is tied to. Certain options simply feature loops protruding out. However, this is less common because hitting the loop using the hand can be painful.

To ensure the pole stays stationary, it’s either embedded in the ground or anchored down with a concrete-filled tire or a blow molded plastic base filled with water or sand or concrete (in certain cases).

It’s generally slender nylon and has enough length to ensure the ball hangs around 0.61 m (2 feet) above the ground.

These are the steps to set up the game:

What Are Basic Tetherball Rules?

Alternate Play: After the service, the server is not allowed to touch the ball again until the rope gets wrapped around the pole four times or the opponent makes contact with the ball.

How to Score Points in Tetherball Game

A player earns 1 point when they wrap the rope as far around the pole as it’ll go in their direction.

Fouls and Penalties to Note

Watch out for the fouls and penalties below to ensure the game is played according to Tetherball rules. You’re allowed to call the following on your opponent (or yourself), and play will stop, after which one of the penalties explained below will come into effect:

The player that earns the highest score after 7 games becomes the winner of the game.

Tetherball origin isn’t certain. But some people have suggested that in the 9th century, the Tatars that were resident in the areas of today’s Ukraine, Russia, Kazakhstan, and Uzbekistan would hang the head of their fallen enemy from a pole and strike it using a stick.

Others have opined that Tetherball might be related to the practice of maypole dancing, which was performed in medieval England and northern European countries. Villagers in those places would hold ribbons or ropes hung from a tall pole and dance around this pole.

But since the ball commonly used looks like the volleyball, Tetherball game is thought to have been designed sometime after 1895, following the volleyball game’s invention.

A popular version of Tetherball, which is known as paddleball, is played in the UK, Australia, New Zealand, and South Africa. In this variant, a smaller ball is hung from a pole and struck with paddles.

Highlighted above are Tetherball rules. To learn how to play, it’s crucial to master these rules. Whether you want to play Tetherball professionally or casually, this guide will be of great help.