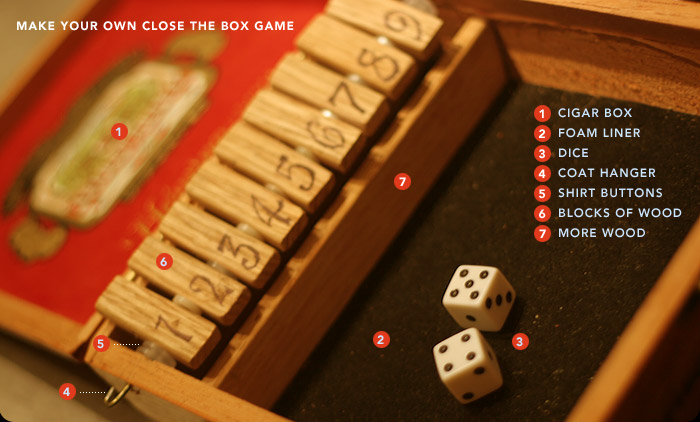 Shut the Box Rules and Gameplay Instructions For Beginners & Pros

Alternatively referred to as Canoga, Shut the Box is a traditional pub game that has no national governing body, giving rise to many variations of equipment and rules. Locally played rules always apply in case there’s doubt.

Shut the box is one of the top classic wooden games for friends and family. It accommodates any number of players, though the game is most enjoyable when there are 2–4 players. Some even play it solo as a pastime.

As it’s traditionally played in English pubs, the game is a gambling pastime where each player will pay a predetermined amount into the “pool” at the beginning, and the person who wins will collect the pool at the end of each round.

But gambling isn’t mandatory to play the game. Here are Shut the box rules:

What Exactly Is Shut the Box Drinking Game All about?

Shut the Box goes by various names: Canoga, Bakarat, Blitz, Klackers, Kingoball, Batten Down the Hatches, Trictrac, and Jackpot. It’s a game of dice that can be played by 1 or more persons.

It’s popularly played in a group of 2 – 4 for stakes. Traditionally, the game involves the use of a counting box that has tiles numbered 1 – 9, with each of them covered with a hinged or sliding mechanism.

But it can be played by simply using a pair of dice, pen, and paper. There are variations where the box contains 10 – 12 tiles.

Dominoes can alternatively be used for the tiles. That way, it’s possible to use up to 6 dice with a Double 18 domino set.

Apart from these, a deck of cards can also be made use of as tiles. Additionally, if you so wish, you can opt for a complete conventional Western deck that contains the jokers (54 cards), allowing for the use of as many as 9 dice.

The “box” is an open tray that contains a baize interior, and there are also row numbers (1 –9) along the top length.

Each number contains a corresponding square panel cover that can either swing or slide to cover the number. The only other requirement is 2 dice, though a dice cup could be utilized if you so wish.

What Are Shut the Box Rules?

When the game starts, all of the tiles or levers are “open” (cleared, up) and show numbers 1 – 9. Each participant in the game will play in turn.

To start a turn, a player will roll or throw the die or dice into the box. If the remaining tile(s) gives six or lower, the player could roll only a die. If not, the player has to roll the 2 dice.

After throwing, the player will sum up (or subtract) the pips (dots) on the dice, after which he/she will “shut” (closes, covers) one of any combination of open numbers, which is equal the total number of dots that show on the dice.

For instance, if 8 is the total number of dots, the player could select any of the sets of numbers below, so long all the numbers in the set are there to be covered:

The player will now roll the dice again, with the aim of shutting more numbers. He/she will continue to throw the dice and shut numbers until a point is attained where the player isn’t allowed to shut any more numbers based on the results brought forth by the dice.

After that, play will move to the next player. When all players have taken a turn, the player that earns the lowest score becomes the winner.

If a player closes all the numbers successfully, he/she has “Shut the Box”, and the player wins the game automatically. That means game over.

Variations of the Game

Shut the box is a traditional pub dice game, with its rules having several local and traditional variations. Additionally, the game’s rising popularity has led to the development of many variants in recent times.

Here are the three most popular variations:

To win games consistently, it’s crucial to master Shut the box rules. While there are many variations of the rules, you should use the ones applying to your locality if in doubt.

Lastly, with some practice and using an effective Shut the box strategy to win games, you will love this drinking game.