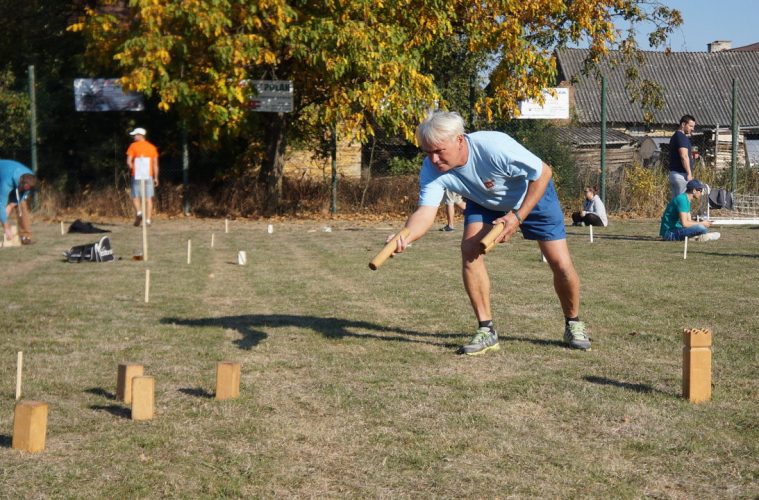 A traditional outdoor Swedish game, Kubb provides a lot of fun for families, kids or individuals that play this game professionally. It’s a lawn game in the skittles family.

This name comes from the rather pervasive legend, where bored Vikings kept themselves preoccupied to pass the winter by playing Kubb using the bones of their enemies they defeated.

The game is quite popularly played in the Great Lakes region. However, it’s easy to come across local casual or even competitive leagues all around the US.

To learn how to play Kubb and rules, it’s crucial to note that these rules are friendly and easy to observe. Let’s dive deep into all you need to know about playing Kubb.

Things You Need to Play

Gravel or grass is the best playing surfaces for Kubb.

To get started, it’s necessary to have the playing court marked out. While no standard size is available, these are the 3 sizes commonly made use of:

However, this could make it too difficult for beginners and kids to play the game since they’re still learning the ropes.

There are lines at either end of the court and are referred to as the “Baselines”. The “Middle Line” is that imaginary line that’s parallel with the baselines through the middle of the court.

How to Play the Kubb Game & Rules

In Kubb, the number of players on each side is flexible. The game is very social and is best played when you can have around 2–3 on each side.

Also, one-on-one play is commonly engaged in for casual play.

You’re allowed to modify the rules to give room for playing with an odd number of persons.

The gameplay starts with a Kubb player from each side lagging to decide who is to go first.

Here is how this is done: A player will stand behind his baseline and throw a baton underhand to get as close as they can to the king, making sure it’s not knocked over.

The team that its player lands the baton closest to the king will determine the side to throw first.

Then, play can start after selecting the team that will first play.

There are 3 stages in every turn:

The team that will initiate play will share the 6 batons with their teammates. This step will be carried out in such a way that each player in that team gets a minimum of one stick.

Then, the active player will stand behind his baseline and toss the stick at the baseline kubbs of the opponents in a bid to knock over as many as possible.

In a legal throw in this game, a player is required to do the following:

Players are allowed to throw in any order they want. However, a single player can’t throw twice in a row.

Teams don’t have to stick to the same order throughout the whole game. However, every player is required to throw a minimum of one stick in each round.

When the first turn is done, all the field kubbs on the side of the field, where your opponent is, have to be knocked down.

And this has to be done before you can eliminate the baseline kubbs and ultimately take out the king.

You’ll commit a foul if a baseline kubb is knocked over before all the field kubbs go down. The baseline kubb becomes reset, and the turn of the throwing team ends.

If your opponents doesn’t successfully knock down all the field kubbs from the previous round, what marks the new baseline is the field kubb that’s closest to the king.

And every member of your team is allowed to throw from any inbounds position behind it.

As soon as all 6 sticks are thrown, players from the other team will pick up any kubbs knocked over and throw them to the side of the field where the opponent is.

If the kubb fails to land within the other team’s side of the field, the kubb could be thrown again.

Failure to land the kubb a 2nd time will give room for the other team to put the kubb anywhere they choose on their own side of the field, so long it’s a minimum of a baton length from either the king or stakes.

In the Kubb setting phase, the team whose side of the field the tossed kubbs land on is responsible for standing them up inbounds.

To do this, they will lift the kubb up while ensuring any edge of the kubb stays permanently on the ground and making use of it like a hinge.

When the field kubbs have stood up, the batons will pass to the other side and play goes on in the same manner until the king becomes knocked over.

The game can be worn in 2 ways, according to kubb rules.

The fastest one is if your opponent commits a big mistake and knocks the king over at any time.

If that doesn’t happen, winning the game involves a team having to knock all the field kubbs over, in addition to the baseline kubbs, and the king respectively, and in a single turn.

The kubb rules explained above are the most common way to play the game in the United States. However, we’ve several regional and league versions of the rules.

Here are some of the most popular variants:

In this rule, the purpose is to get rid of much of the advantage of playing first.

It comes from US National Kubb Championship rules. In this variant, the first team to throw can only take 2 batons, while the opposing team can only throw 4 batons during the 1st round.

In further rounds, the 2 sides could make use of all 6 of the sticks.

This shares some similarities with the rule above.

The 4 6 opening rule stipulates the team that throws first is limited to 4 batons, and the opponents are permitted to throw all of the 6 sticks in the 1st round.

The 2 teams can make use of all 6 batons in every subsequent round.

Here, a player that’s aiming for the king has to stand with their back towards the king and throw between their legs.

A lot of fields for younger players have a dimension of 10ft x 20ft.

A Kubb game can take a long time to complete, particularly for rookies.

In a bid to shorten the game significantly, certain players prefer playing with the rule that states once a kubb gets knocked down once by the 2 teams, the kubb is taken off the field.

What is tower of Kubbs?

While following this rule, if a player throws a kubb and can hit a standing field kubb, the 2 kubbs are arranged one on top of the other to build a tower.

Each additional kubb that knocks down a field kubb tower becomes added to it.

What is one shot rule?

In this rule, a team could only attempt to knock the king down once in each turn.

If the thrower fails to hit the king, the turn will end immediately.

If the game of Kubb looks fascinating to you, you can partake in it by joining one of the numerous local Kubb clubs throughout the United States.