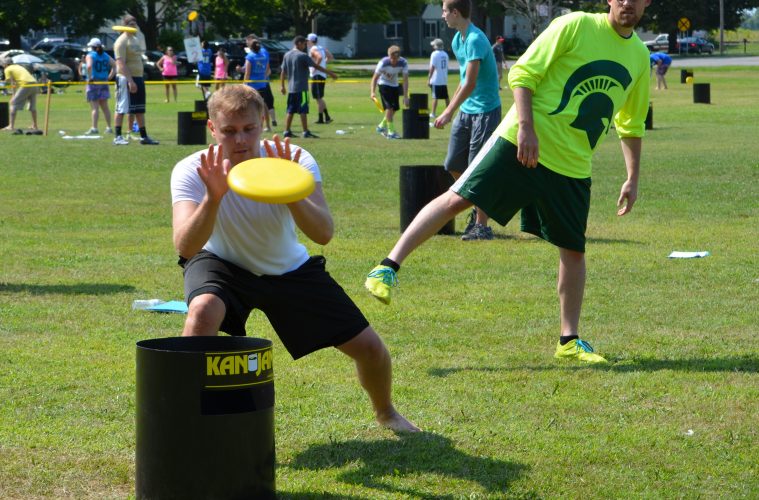 How to Play Kan Jam – Rules and Basic Instructions 2021

KanJam is known to be a fun outdoor game that can be played anywhere with a space of 50 feet. The game is pretty simple to play, and you can use your backyard or the beach.

Garbage Can Frisbee, as it is formerly called, had its origin from a group of friends in Buffalo, New York.

Initially, KanJam was only common around Buffalo until the mid-1990s. That was when the co-founders Charles Sciandra and Paul Swisher sited a company and changed the then “Garbage Can Frisbee” to KanJam.

The creators requested a patent but flopped as it became difficult to identify it from the other existing games such as “Tiddlywinks”.

But the setback was surmounted soon as ‘instant win’ feature was made known. After years of establishment, the patent was later approved, and KanJam became available in 2005.

The game is now widely accepted in various regions. Here is a quick run-through of how the game is played, rules, and other tips to make you a better player.

KanJam Splash has a floatable bottom because it is made to be played in water. It also has a smaller shaped goalpost and disc.

KanJam Mini is to be played in the house or outdoors on a table, floor or wherever it suits. It also has a small goalpost and disc.

KanJam Count is more like a football game because it has some of the features of football.

It was developed by Andy Wheeler and PJ Tudisco and played using two V-shaped goals as the goalpost.

How to Play the Game

KanJam is a flying disc game, which implies that you play with a disc and garbage container. It is a 2 on 2 team game that has to do with throwing a Frisbee at a garbage can.

You do not have to be an athlete to participate in this game because there’s no really any special way to throw the Frisbee.

The cans are positioned 50 feet away, while you and your co-partner are required to be at the extreme.

Basically, you and your partner only have one out of these three things to do: let the Frisbee jam the can, deflect it into the can or, greatest of all, let the disc go round the opening of the can for a quick win.

Since it is a 2 team game, one player tosses the Frisbee, and the partner diverts it.

You earn points when the Frisbee hits the can, or when your co-partner jams the Frisbee right into the can.

This game can be really frustrating at times when you have 3 people who are very good at it, and 1 person who isn’t so good at throwing a Frisbee.

It is quite hard for a single player to maintain a team, so you absolutely need 4 people who can throw to get the best fun out of it.

There are some misconceptions about KanJam that should be totally disregarded such as;

Here is a tip for beginners:

You can change the positioning of the can if the 50-foot distance is too much for you. Every other rule remains untouched.

Scoring in this game is quite easy. The points are as follows:

Dinger: Here, you get 1 point when your partner redirects the disc to jam the can.

Deuce: You get 2 points when the disc is thrown to hit the can without the help of your partner.

Bucket: 3 points when your assistant redirects the Frisbee straight into the can.

Instant win: The game is over once the disc lands by going around the opening of the can.

Here are some tips to help you score better and win:

Also, note this: KanJam is always fun whether you win/lose, but no one fancies losing, so it’s always awesome to win.

How do I decide who plays first?

Get to decide who plays first by either with a very brief round or by flipping the disc. Whoever wins decides on if to throw first or second.

It is beneficial to pitch last; this is simply known as having “The Hammer” because you always get the opportunity to win the game with an instant win.

Can we use any disc?

It is possible to use any disc if you are just playing around. On the other hand, you’ll earn a lot better when you use the proper Kanjam disc.

Where can I get KanJam?

Mostly, the game is sold locally at outdoors sporting stores.

That concludes today’s post on how to play KanJam.