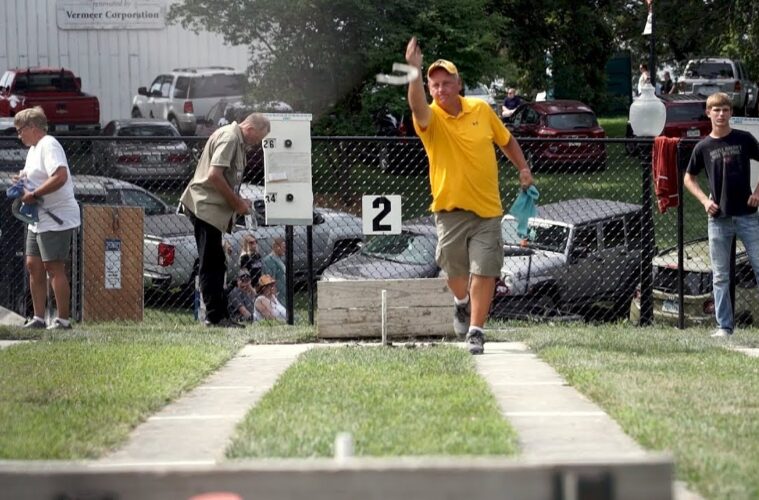 How To Play Horseshoes Rules And Gameplay Guide

If you’re interested in trying out a distinctive outdoor game, you should consider playing Horseshoes.

It’s a fantastic game gaining popularity in the gaming world and can be enjoyed by people of all ages — ranging from children to grandparents.

Despite its popularity in North America, it is played worldwide.

Thanks to its simple setup, you can play this game in any outdoor location, including your own backyard.

Everything you need to know about horseshoes is here for you.

To get started, let’s review the regulations, how to set up your pitch, what gear you’ll need, and how to keep score.

It may appear to be a lot, but don’t worry about forgetting any of it. Regardless of the situation, we’ve got your back!

Horseshoes, a variation on the traditional British game of quoits, originally arrived in the United States in the early twentieth century and has continued to grow in popularity ever since.

Even though Horseshoes is a simple toss game, it can be difficult because of their unusual form and style of play.

The goal is to get your pitching shoe around or close to a target.

A 40-foot-long outdoor area or space

A few metal posts or rods

A sledgehammer (for setting up your stakes)

String or chalk (to mark out your foul line)

Sawdust, sand, or clay (for a pit – this is only necessary if you want a permanent/professional pitch); grass will suffice otherwise.

Place the stakes 40 feet apart. Simply drive the stakes into the ground if you want a temporary horseshoe playing court. (A mallet will come in handy for pounding them into dense dirt.)

Stakes should be spaced 15 inches apart.

You may bend them slightly inward toward one another but no more than three inches away from vertical.

Next, create a more permanent backyard field by excavating a 4-inch-deep rectangular trench 31 inches wide by 43 inches long around each stake.

Sand, sawdust, or another fine filler product should be used to fill each pit.

Here are a few other fundamental rules to familiarize yourself with prior to starting:

The opponent(s) must remain silently behind the opposing platform when someone pitches.

It is not permissible to taunt or shout at the players, nor is it permitted to attempt to impede the throw.

No player may begin heading toward the other end of the playing area until the player(s) has thrown both shoes for their current turn.

Failure to do so, the player risks damage.

Foul lines must be drawn at 27 and 37 feet from the opposite stake.

According to the game’s official rules, adult men’s shoes shall be released from the platform behind the 37-foot line unless they are 70 years old or older.

In that instance, they may toss from the 27-foot line. The 27-foot cord should also be used by women, children, and anyone with a physical disability.

If you have many horseshoe playing sites, each should have a barrier to prevent injury.

For instance, if you have two pits adjacent to one another, they should be separated by something.

There are two ways to break ties. First, the game remains tied. Then, each player gets a split victory and a split defeat.

Additionally, players may proceed to a one- or two-inning tiebreaker or continue playing until the tie is broken.

Safety is important. First, make sure the opposing player has already left the pitch before you even consider throwing your horseshoe.

Then, you can safely throw your horseshoe once the pitch is clear.

The following are the most widely used horseshoe grips:

This approach is most commonly employed in casual games!

Simply grasp the horseshoe in the middle bottom (the end without a gap) with your fist or between your thumb and index finger and throw it while aiming for the stake.

Some people prefer to take a couple of steps before releasing the horseshoe to generate momentum and thus increase the force of the throw.

This grip is slightly more challenging to control and is often utilized by professional players.

Begin by holding one of the horseshoe’s sides with the open end facing up and then throwing the shoe at stake.

According to legend, a perfect shot requires the horseshoe to turn 14 times. That’s how the name came about.

The reverse flip is rarely utilized and is frequently reserved for horseshoe pitching experts.

In a reverse flip, the shoe’s arch is flipped downward rather than upward.

The grip is identical to that of a normal flip. The reverse flip requires considerable thinking and is not recommended for inexperienced players.

A few phrases and terms are essential for any horseshoes player to know, ranging from the lines you throw behind to the objects you throw:

How deep should a horseshoe pit’s sand be?

8 inches is the standard for professional events and players. All other events and games can be accommodated with a height of 4 inches.

In Horseshoes, Do You Have to Win by Two Points?

The answer is no. Unlike many other games, horseshoes do not require a player to win by at least a two-point margin to be considered a successful entrant.

Even if both players score 20, if you’re playing to 21, it’s okay if one player gets to 21 and the other gets to 20. The guy with 21 points is still going to win the competition.

It should be noted that this rule could be introduced to provide a more difficult challenge than the standard regulations.

Texas Horseshoes is a variant of the conventional horseshoe game that you might prefer if you’re having trouble mastering the regular rules.

Rather than shoes and stakes, players seek to pitch washer-like rings into cups that have been set on the ground.

This is why it is commonly referred to as “the washer-toss game.”

Many people enjoy the idea of a throwing game.

Still, they aren’t interested in learning how to play horseshoes, which traditionally requires a high level of expertise.

To become a master in horseshoe pitching, you’ll need a lot of practice and dedication.

And like many backyard games, Horseshoes is also an excellent game for people of all ages to play.