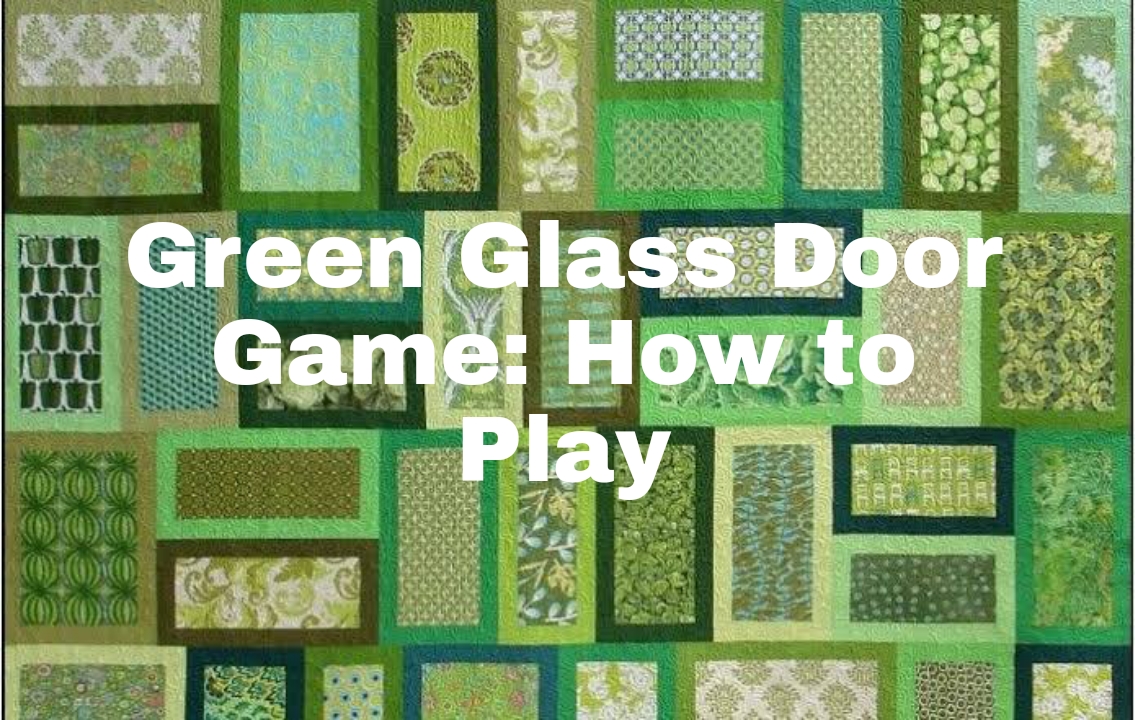 If you’re looking for a versatile icebreaker game that you can enjoy with friends any time, then the Green Glass Door game might be just what you need.

There must be a minimum of three participants to play this game.

Players have to use their logic to make educated guesses about what they can and cannot bring through the Green Glass Door.

You don’t require any special equipment before playing, making it a great choice for your upcoming company party.

Keep reading to learn how to play Green Glass Door and why it’s such a terrific all-around party game.

What Is the Green Glass Door Game?

Green Glass Door is a word game in which players attempt to guess the hidden rule in a phrase by saying the words using their own example.

You don’t need any special material for this game.

You only need a few players to get started.

However, if you want to turn it into a penalty game, you can have a drink, as this is a drinking game after all.

Before you play, you’ll need to do the bare minimum setup, just like the equipment.

Simply make sure everyone is informed of the rules, have something to write with if necessary, and is sipping an adult beverage before you begin.

Then, after you’ve sorted everything out, you can begin the game when everyone is ready.

The game’s rules are simple, but figuring out what to say is the difficult part, especially when finding out the hidden link.

Similar to the equipment, you’ll need to perform the absolute minimum setup prior to playing.

Simply verify that everyone understands the rules, has something to write with prior to starting, and has a drink if playing as a drinking game.

Once everything is in order, you can begin the game when everyone is ready.

The two phrases are substituted with words that first adhere to the rule you’ve set and then violate it.

For instance, if you use the three-letter rule as your starting point, you would state, ‘I can bring a dog through the door, but cannot bring a monkey.’

The next person in the circle must then repeat the statement, attempting to predict the rule by substituting their own instances for the phrases.

If a player tries to pass something longer than three letters through the glass door, they will be eliminated from the game.

Tell that disobedient participant, ‘You cannot bring that through the glass door; you’re out.’

Suppose you’re playing the game as a drinking game, then you have to get that person to take their drink.

As soon as everyone has worked out the first rule to follow, the phrase moves on to another harder rule to obey.

Continue until only one person remains who becomes the winner of the game and the next person according to the numerous regulations.

But you may create one by awarding one point to the person who is left standing at the end of the game.

The participant having the most points at the end of several rounds is the winner.

The game facilitator can specify what items are permitted to pass through the Green Glass Door. For instance:

The Green Glass Door Riddle is well-known, but nearly every group has members who have never heard of it.

There are diverse options available, each with its own set of bespoke features and content.

Depending on your preferences, you can rename the game to reflect the new settings.

For example, the game might be called Bags, Buckets, and Baskets if you only use plural nouns.

The first player will start by saying, ‘I can put dogs in my bags, buckets, and baskets, but not a puppy.’

Come up with clues by imagining objects that are linked, opposites, related, or from the same category as each other!

For example, an apple and an apple, rather than bananas, while you’re trying to figure out what to use as a clue (ex. pepper, but not salt).

Provide as many clues as possible that are as elusive as possible so that gamers who don’t know the answer to the Green Glass Door’s mystery will remain speculating.

In order to continue playing, players must accurately name objects that can pass through the Green Glass Door and those that cannot.

Once a player misidentifies what may or cannot travel through the Green Glass Door, they’re out (or have to drink).

The Green Glass Door is a fun riddle game that you could enjoy if you like playing riddle games.

Alternative Methods of Participating in the Game

Occasionally, the players who initiate the game can function as “gatekeepers,” allowing the object to pass through the green glass door.

Additionally, if it is more intricate, such as “I can bring a drink but not a cup.”

It adds complexity to the game as players attempt to figure out the relationship between two words.

This can occasionally be played as a puzzle game to see how logical your pals are and what they can bring to the green glass door.

Then, allow your friends or relatives to continue guessing in order to solve the puzzle.

What are some examples of appropriate rules and phrases for the Green Glass Door game?

Maintain variety and think outside the box to prevent the game from becoming too easy for players.

The Green Glass Door Riddle is well known, but some players might have never heard of it and are therefore unfamiliar with it.

Nevertheless, they’ll definitely enjoy it, and this is particularly true for young participants.

The variants described above each add a unique piece of personalized content.

If desired, you can edit the game’s name to correspond to the settings you’ve chosen.

For instance, if you use just plural elements, you may title the game Bags, Buckets, and Baskets.

Start by saying, “I can put a dog in my bags, buckets, and baskets, but not puppy’s”.

Be inventive, have fun, and spread the word about this game to your family, friends, and children.

It’s a game about figuring out solutions to problems and is a fascinating alternative to Bachelor Party Drinking game in this genre.

Most Exciting Picks When everyone is seated in a circle, the first person to speak speaks two things.