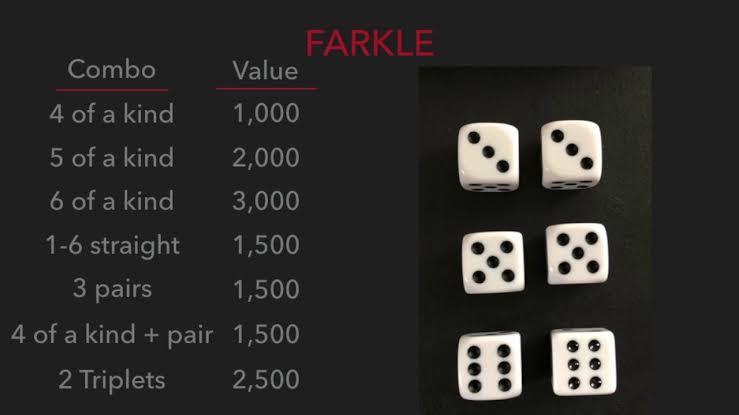 This title is the perfect dice game for families and friends — let’s explore Farkle rules and gameplay guide.

The basics of this pastime are more than die rolling or trying to be the first player.

It’s a fast-paced recreation that’s entertaining and can be played by persons of all ages.

Furthermore, this classic game is straightforward to play.

Newbies will enjoy playing it with six dice and paper.

But expert players will take delight in the trials of making the best scoring combinations.

We’ve penned down everything you need to know about this game, including how to set it up, track the score, and above all, how to win!

It’s possible that, at first glance, Farkle, like many other dice games, appears to be extremely basic and straightforward.

That’s why it’s such a well-liked drinking game.

The good news is that Farkle may be readily played at a party or a game night with friends.

There are six dice in Farkle, and the players take turns rolling them to score points.

Dice rolling will become increasingly rare as the game progresses.

It’s important to remember that Farkle is a lot more complicated than this, though.

Depending on the combination, you’ll get more or fewer points.

To take that score, you’ll likely have to discard more dice.

As a result, you’ll have less dice available for use on your next roll.

If you get a terrible roll, you run the risk of losing everything you’ve earned.

Farkle, it turns out, is a lot more complicated than you may imagine.

Despite the fact that the game is thought to be centuries old, the name Farkle was not used until the late 1980s.

Additionally, there are numerous variations in the regulations.

However, the majority of them will likely remain with the more traditional/standard options.

The object of the game is to make the best combinations in order to gain more points you’re the other players.

Three to six players can play it.

What you need to play

Farkle doesn’t require anything special, and you can play using the following components:

A nice Farkle game starts with all participants sitting around and deciding who goes first.

You can choose the youngest player or the oldest, or host to start first since there’s no official rule on that.

After that, Player 1 places all the dice in the cup, shakes it, and simultaneously rolls all six dice, initiating the game.

How to Play Farkle

After throwing all six dice, the player checks for any scoring combinations (described below) and may choose to set those dice aside and re-roll the remaining dice so as to gain more points.

The participants should set aside at least one die for each roll that results in a scoring combination, but not all of them.

They then throw five dice and score another combination, reserving one of those dice for their next turn, which will be a four-dice throw, and so on.

That player continues their turn until either they pass or their throw results in no points.

In the latter situation, this is referred to as the Farkle.

Meaning all the participant’s points for that turn are erased.

For instance, suppose a player tosses four times in a single turn.

This equates to a possible score of 700.

Then, on the fourth throw, they fail to score.

Thus, their final score for that round has been reduced to zero from 700.

Take note that score combos are only valid if they are completed with a single throw.

Occasionally, a single roll will generate many scoring opportunities.

The objective of Farkle is to accumulate 10,000 points.

When a participant gains 10,000 points, the other players receive one final throw.

If none of those players has a score equal to or more than 10,000 points following that throw, the person with 10,000 points wins the game.

However, if any other participant gets a score higher or equivalent to 10,000, that player is the winner.

We’ve listed various scoring variants below; you can use these in addition to the basic scoring scheme described previously.

You may choose whichever of the variants you want.

However, you can only pick one or two in order to keep the game simple.

Three pairs are worth 500 points

Alternatively: 6 times the value of a three-of-a-kind

Six of a kind = Quadruple the 3-of-a-kind value

There are no points awarded for a straight.

The Score for the Opening

At the beginning of the game, each participant continues tossing the dice until they reach 500 points or Farkle.

Once players get 500 points, they’ve the option of continuing rolling or ending their round.

A player who rolls all six dice and achieves a score must move them all again at least once.

If a player throws four or more 2’s in one roll, it cancels all their score for that turn and instantly ends their turn.

A participant may begin their turn by rolling any remaining dice from the preceding gamer’s turn (e.g., those dice not laid aside for scoring during the previous player’s turn).

If that person scores on the first roll with any of the dice, they receive 1000 points in addition to any previous points accumulated.

To win the game, a player must accumulate precisely 10,000 points.

If a player earns more than 10,000 points, the player with the lowest score receives all points earned in that turn.

In this variant, you use five dice instead of six.

(In this method, there is some scoring combo you can’t use, like three pairs.)

The game is team-based.

Teammates are seated opposite one another at the table, and their scores are combined.

Farkle is an exhilarating, fast-paced dice game that’s ideal for anyone searching for something simple to set up without requiring a lot of equipment.

Even if Farkle isn’t exactly right for you, many other options are just as simple to get started with.

The game is frequently likened to Yahtzee, which is played similarly, with players rolling multiple dice and attempting to score point combinations.

Additionally, it moves at a slower pace than Farkle.

So, if you’re looking for a game that allows you to unwind and take your time, this is a good choice .

Alternatively, games like 3 Dice and Qwixx, which require a basic set of dice and scoresheets, may provide hours of fun for the whole family.

On that note, we draw the curtain on Farkle rules and gameplay guide.

Shut the Box Rules and Gameplay Instructions For Beginners & Pros