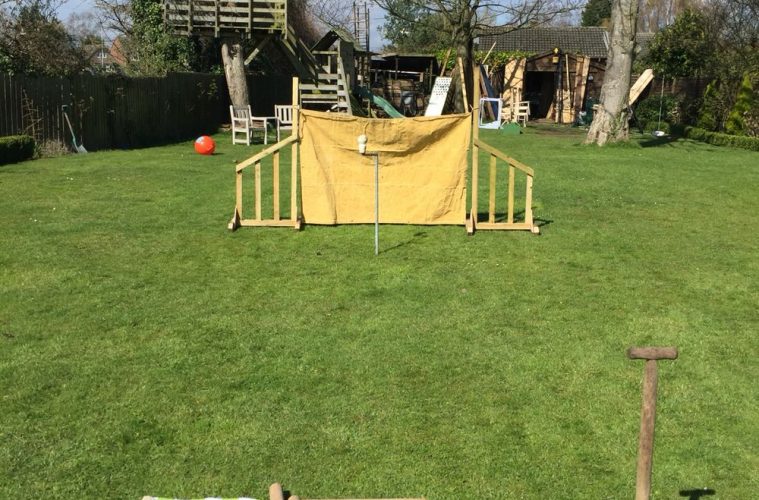 Aunt Sally is a traditional Oxfordshire summer game, which is still played in several pubs in that area in England.

Play involves players throwing battens or sticks at a doll or dolly, which is a model of an old woman’s head.

Leagues of pub teams still play Aunt Sally currently, mainly in Oxfordshire and some bordering counties, throughout the spring and summer months.

Let’s take a look at the basics of the game and how to play.

What’s Aunt Sally Game All about?

“Aunt Sally” is used as a synonym for a straw man fallacy, which means misrepresenting an idea or argument to make refuting it easier.

Aunt Sally is a traditional Oxfordshire/Cotswolds summer game, which people still today in several pubs in the area.

The dolly, which is a 10-centimeter skittle or high ball, is positioned on a metal spike typically about 3 foot tall. Players, usually in 2 teams of 6 participants, take turns to throw 6 sticks at the dolly.

In this game, the aim is to knock the dolly off the spike, and throwers mustn’t hit the spike in the process.

It offers you a fun way to spend an evening or lunchtime outside at a pub, as you get to find out just how challenging it can be! Also, Aunt Sally is worth giving a try if you want to unwind in a pub with a court.

For starters, you need the doll. It’s shaped like a short squat skittle and required to be around 3.5 inches in diameter and 5 inches high. It has to be painted bright white.

The swivel measures roughly 3 inches long and lies horizontally. There’s a small round platform at one end for the doll to sit on.

And the other end is fixed into the top of a post to ensure the arm can swing freely, revolving around the post. The post’s height has to be adjusted, so the doll’s base lies 2 feet, 6 inches from the ground.

Posts are typically metal, and a ¾-inch metal tube (the same one in gas pipes) is a perfect post.

Further, ensure the sticks are 18 inches long and 2 inches wide. They must be made of hardwood.

On throwing each stick, the thrower has to stand behind the ochee, which is a 2-inch high wooden strip. The front of the ochee has to be thirty feet from the base of the doll post.

Players often hang a backdrop behind the doll for absorbing the impact of flying sticks, as well as the doll. You can make the backdrop with a canvas, leather, or rubber sheet.

How to Play Aunt Sally

In a leg, each thrower will throw six sticks at the doll. And the sticks have to be thrown underarm.

Each time the doll gets knocked off, it’s re-seated immediately for the next throw. After counting the number of successful throws, the player that has the highest score becomes the winner of the leg.

An important Aunt Sally game rule when it comes to scoring is, the doll has to be hit cleanly. If a stick strikes the iron or the post and makes the doll fall over, this doesn’t count.

You can only earn a point if the stick strikes the doll neatly without touching any part of the post or the iron.

A game of Aunt Sally comprises a number of legs, and for a singles game, it could be the best of five legs.

In singles, if at the end of a leg, the result is a draw, one method for settling the leg is by sudden death, where each player will throw a stick until a player becomes the winner.

A league match is usually contested by 2 teams, where each team will have eight participants.

Each member of a team would play against another from the other team. So, there will be eight games with each player playing once.

Alternatively, a side could first throw to set a total, while the other team will then throw to try to beat that total.

A game comprises three legs, with each carrying 2 points. If there’s a drawn leg, each team earns one point.

Unless previously specified, the captains of each shall toss a coin for each leg, and the winning captain gets to choose whether to throw first or second.

Usually, there’s a fourth leg commonly called the “BEER LEG”, which comes after the three legs have been played. The team that loses the fourth leg is normally required to purchase a pint for their opponents.

A Brief History of Aunt Sally

Before we round off this post on Aunt Sally game rules, let’s take a brief look at its history.

It was traditionally played in British pubs as well as fairgrounds. An Aunt Sally was initially a figurine head of an old lady that’s a clay pipe in her mouth, or a ball on a stick subsequently.

The objective was for players to throw sticks aiming for the head to break the pipe. Aunt Sally shares a number of similarities with skittles or a coconut shy.

It could have developed from the blood sport of cock throwing.

In the sporting activity, a chicken was tied to a post, and players would take turns to throw coksteles, which are special weighted sticks, at the bird until it died.

In modern times, Aunt Sally is still played as a pub game in the Oxfordshire, Cotswolds, Berkshire, and Buckinghamshire.

The ball is placed on a short plinth that measures roughly 10cm high and is called a “dolly”. The dolly is positioned on a dog-legged metal spike, with players throwing short battens or sticks at the dolly in a bid to knock it off cleanly without hitting the spike.

According to some authors, this game’s roots go as far back as the 17th Century (at least).

They suggested that it could have been introduced by Royalist soldiers when the English Civil War was ongoing when Charles created the court in Oxford.

But the earliest references to the term “Aunt Sally” can only be traced back to the mid-1800s.

Therefore, unless anyone presents a more concrete account than historical speculation, we should assume this game was invented, in addition to lots of others by the Victorians.

Aunt Sally is a traditional summer game in Oxfordshire. It is still played in several pubs in that area in England.

In the game, players aim to knock the dolly off the spike, without hitting the spike. Once you learn Aunt Sally game rules, you’ll find it easy to play.

How to Play Kan Jam