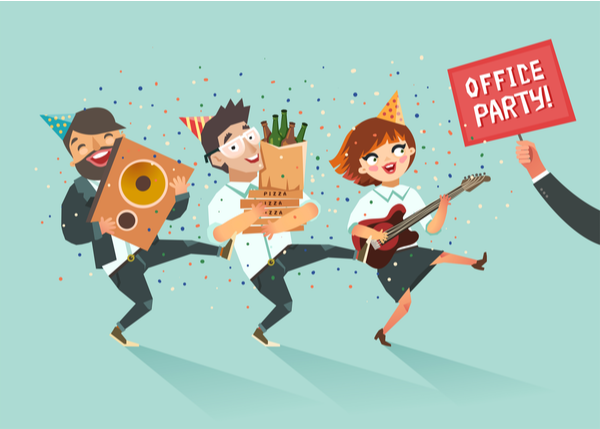 If you find the atmosphere in your office mundane, in this post, we’ll show you how to make your work activities interesting with 20 office party ideas.

As the old saying goes, “All work and no play makes Jack a dull boy.”

Hence, hosting an office party is a sure way to rejuvenate our brains while having fun.

Here are 20 office game party ideas for you:

This is a simple and relatively common game that works well for small and large groups.

What you need: A pencil, a drawing board or easel and the chart of objects or pictures.

How to play: Playing the game requires the group to be shared into teams with at least 4 members per team.

One person is appointed as the “artist” who draws the images or object to be described by the other teammates (instructors).

A facilitator chooses the image to be drawn.

It could be anything from an office stapler to a cup or even drawing Mickey mouse.

The description should not say exactly what is to be drawn but rather give little information to form the final image.

For instance, if a teacup is to be drawn, rather than saying it directly, a hint could be given, like a small piece of ceramic with a handle used to hold liquid for drinking.

The artist should face away from the instructors and has approximately 3minutes to complete the drawing.

The challenge comes from the fact that the instructors have to be precise in their hints and the artist can’t ask questions.

The team with the drawing closest to the actual object is the winner.

This game appears on the list because not only is it fun as you get to see some funny drawings as well as hear interesting ways people describe things, but it also provides a humorous atmosphere that improves communication as well as creativity.

This is a card game that also works on creativity and the ability to think fast.

The game aims to get a player who can make sense of a set of jumbled words before the time runs out.

For instance, a card could have the words “Mic Cup Two Door Real” which actually means “MakeupTutorial.”

What you need: A box of inchoreant that contains 500 cards and a timer.

How to play: It can be played as a free for all or a team.

The cards are shuffled, and one of the players is selected as a judge.

The judge rotates each round.

Each round ends when the timer is done or after three cards.

The reigning judge flips the timer and picks up a card, revealing the front with the jumbled words to the players.

If the players are finding it difficult then, they get a hint from the judge.

The player that successfully provides the answers to 13cards wins for the individual games, while the team with the highest correct responses at the end of the third round wins for the team games.

The game gets exciting and hilarious when players start suggesting words. What do you think “Birch You’ll Ray Yell Lid He” actually means.

Play the game and listen to unusual suggestions.

This game is a fun way to know how well people listen and actually pay attention to details.

It can be played as individuals or in teams.

What you need: A list of sentences or phrases.

How to play: The players are arranged in a circle or whatever format is easier to whisper words without others hearing.

The facilitator shows the first person a sentence, and the game begins.

The sentence is whispered from one player to the other until it gets to the final person.

The team with the correct sentence closest to the initial sentence wins.

Yes, you have a job already, but how would it feel applying for a job you really don’t want.

What you need: A box of the funemployed game that has 359 qualification cards and 89 job cards.

They must only have 4 cards after building their resume.

A job is pulled out, and the swapping begins.

After they are done, they try to justify their qualifications in relation to the job.

Whoever the employer chooses is the winner.

The employer role is rotated among the players.

this is a really simple want fun game. The objective is not to laugh.

How to play: The players arrange themselves in a circle and look at the person beside them.

The first person to laugh is out, and the winner is whoever is left not laughing.

This is a straightforward game that simply requires no prior planning or special equipment.

How to play: Randomly pick an item from someone’s desk and show it to the remaining players.

Everyone tries to guess who the item belongs to. Whoever wins picks the next item from anyone’s desk.

This game is usually played as a team.

How to play: From each team, one player is secluded while others consult on which known figure the person would be.

It could be a celebrity or even someone in the office.

After deciding, the secluded player holds a press conference and tries to answer questions thrown at him by the press ( the other players).

The winner is whoever successfully knows who and what the press conference is about.

Have you heard stories with weird and unexpected endings?

Play this game and see how well you can think up a nice continuation to an unknown story.

How to play: The game starts with one person giving a sentence, then the next player has to continue from there.

There’s no winner in this game; it’s just an interesting way of knowing how people think.

This follows the same rules as the regular scavenger hunt.

How to play: The organizer provides each team with a list of tasks to be carried out within a time frame.

The tasks could be within the office or outside.

For every successful task, a picture should be taken as proof, and the teams must always work together.

This follows the same rules as the regular charade.

The facilitator writes some actions peculiar to the office to be acted out by the different teams.

How to play: Player acts while the others try to guess. The team with the highest number of correct guesses wins.

All the players write out 3-4 different actions or stories and put it in a bowl.

Each story is read out, and the players have to guess who each story fits.

The winner is the player with the highest number of guesses.

This is a card game that requires guesses.

What you need: A box of voting game containing 250cards.

How to play: Each player is given a card showing the numbers with which they’ll be identified with and then given 4 other numbered cards minus their own number.

The first player picks a black question card and reads out the question.

The person with the highest number of votes wins.

The games could be played in different ways. Choose the one that suits the group.

A board game similar to blind draw but with a card containing the words to be described.

What you need: A box of the articulate game containing a board, a timer, 6 movers, and 500 cards.

How to play: 2–4 teams can play it with different numbers on each team.

A card is picked, and the word on it is described without actually saying it.

A time is also involved, and the winner is the first team that can move from the start point to the finish point.

There are different variations to the game.

Do you know how we are told to always listen to and obey instructions?

This game is the total absolute.

How to play: A facilitator gives instruction, and the player is expected to do the opposite and win; whoever actually obeys the instruction loses.

For instance, if the instruction says “dance,” you have to make such you don’t dance.

Two Truths and a Lie

Are you a human lie detector? If yes, let’s see how well you play this game.

How to play: Each player writes down two truths and a lie, and everyone tries to guess which one is a lie.

Every player has a turn, and the winner is whoever has the highest correct guesses.

As the name depicts, humans form a snake with their bodies and try to coordinate its movements.

How to play: Each team arranges themselves in a long line with their hands on their shoulders and blindfolded.

The last person at the back is the coordinator, who is not blindfolded and controls the “snake’s” movement with instructions.

A set of obstacles is set in front, and the entire team has to navigate their “snake” through it by only following the instructions given.

Most people don’t look the same as they were when they were babies.

Some go through some major changes.

Similar to the guess who game, this also involves some guessing.

How to play: Players submit their baby pictures, and everything is shuffled.

A facilitator picks one baby and shows it to the players to guess who the baby actually is.

The game is fun as it helps office workers know more about each other while playing.

You know how virtually every job requires you to think outside the box and be unique.

This game erodes everything we’ve been told about following the crowd.

The aim of the game is to write answers that are as close as possible to what every other person does.

How to play: You build a herd from the components of the box and load the small cow tokens in it.

One player is appointed as the questioner who also participates.

A question is read, and the players who write the same answers with the highest number get one cow token each; if there’s a tie, no token is taken.

If there’s only one odd answer, the player gets the pink cow and can’t win till the cow moves to someone else.

How well can you bluff? Let’s find out.

How to play: A die from the Balderdash box set is rolled, and a category is chosen, the “dasher” reads out a question, and everyone writes their answers, after which all the answers are shown, and everyone gets to pick which one they think is the correct one.

Players with the correct answers get to move forward on the board.

The winner is whoever gets to the end of the board first.

This is another interesting card game you can choose among the 20 office party ideas.

The aim of the game is to reveal all agents of your team with only clues from your spymaster.

How to play: The spymaster has access to a key card, and he gives clues on how to identify the agents.

The clues are usually a word and a number.

The goal is to identify all agents while avoiding the assassin.

Whatever game you decide to play out of the 20 office party ideas above — from blind artist to articulate or board and card games to drawing —ensure everyone participates either individually or as a group.

The more, the merrier.