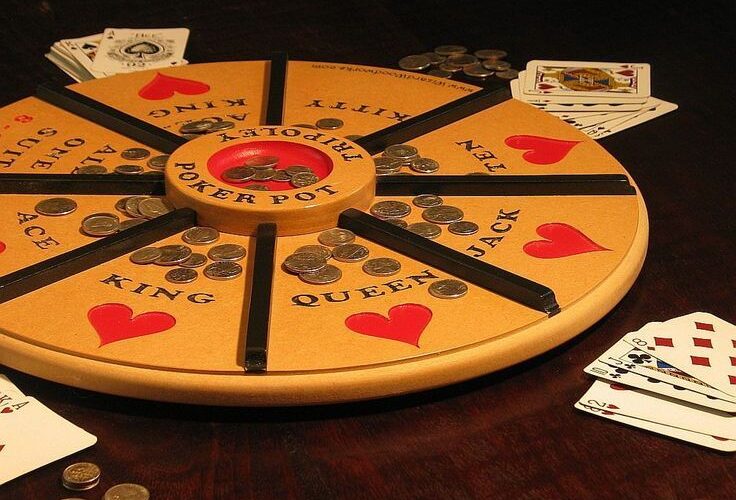 How to Play Tripoley Card Game

Tripoley is a multi-player game that can be enjoyed by two to nine players. However, as a rule of thumb, the game works best with four to seven players.

The game is played with a board and a deck of cards, as previously stated.

As a result, it’s a hybrid of a card and a board game.

Players begin by placing a chip on each of the board’s squares.

To win as many chips as possible, each participant is handed one card at a time.

Tripoley differs from other card games in that it does not use a conventional 52-card deck.

Instead, it uses a custom playing board.

A quality Tripoley game set will contain the following:

It can be difficult to find the right game board for Tripoley because it is such a well-known and distinct game.

To make things easy for everyone, including a pen and paper to jot down the stakes as you go.

Before you can begin playing, you’ll need to do some preliminary setup work to ensure that you’re familiar with the Tripoley rules.

Distribute the game chips equally amongst the players, with the specialized game board in the center.

Everyone should have an equal share of the remaining supplies.

Place one of your chips on each segment of the board, as well as the middle.

This means you’ll need nine chips for each player.

Once the deck of cards has been shuffled, deal each player one card at a time.

Having more cards than your opponents is perfectly acceptable.

It is critical to have a spare hand for gameplay, so deal with an invisible player.

For example, let’s say there are five participants, then there should be six hands.

The Gameplay and Rules of Tripoley

Before starting the game, make sure that the initial game setup has been completed.

In the beginning, the dealer looks at their hand and decides whether or not to keep it or swap it with the invisible player.

Prior to switching, they are not allowed to peek at their hands or mix cards from both hands.

Hand swapping is allowed in this game if both players agree to it, but only one player can do so.

As stated earlier, there are three stages in this game. These are

Each participant gets to retain their initial dealt hands throughout the game’s three phases, making it critical to be satisfied with the initial handed hand.

This is the initial stage in which players attempt to increase the number of chips they begin with in order to use later in the game.

Whoever possesses the ace, king, queen, jack, or ten hearts gains control of that place.

If any of the participants get the king and queen of hearts, then that person can take the chips on the king-queen slot.

Players who have 8-9-10 in separate suits distribute the chips equally in the 8-9-10 slot, leaving any remaining chips for the next winner.

There are usually unclaimed chips on the layout that can be won in a future hand.

Therefore, when someone has the correct cards, they tend to produce bigger prizes than other places.

Here, a conventional poker game is played in which players use their talents to increase their chips to the maximum feasible.

Each player chooses five cards from their hand.

The remainder of their hand is put on hold while they play Poker.

You don’t have to pick the cards that make up your greatest poker hand to play.

(If you’re playing the variant in which stakes are gathered from the layout in stage three rather than stage one, you might not wish to disclose any cards until the phase of the stop of the game.)

The pot slot on the layout is where all of the poker bets are placed.

The player makes the first wager to the left of the dealer, who can either bet (by adding an extra chip or chips to the pot) or check.

To continue the circular rotation, a player who checks may bet or check, and so on.

Poker hands are revealed if everyone checks and the pot is awarded to the highest hand.

If a player bets, future players can no longer check.

Players have three choices after placing a wager:

If a player chooses to “pass” or “fold,” they no longer have a chance of winning the pot.

Instead, the winner will get all of the chips that have already been put in the pot.

The player raises the number of chips needed to call, as well as a few more.

The betting proceeds clockwise around the table indefinitely until one of two outcomes occurs:

All players, with the exception of one, have folded.

The lone remaining player collects all of the pot’s chips.

No one’s cards are displayed in this instance – it makes no difference who had the best hand.

This occurs when, following a stake or raise, all remaining players either fold or call.

In this instance, there is a showdown between these players – they reveal their hands, and the player with the best hand wins the entire pot of chips.

Unfortunately, the folded players do not reveal their cards – they are therefore unable to win the pot.

Even if their hands were superior to those involved in the showdown.

Note that once you’ve passed/folded, you are no longer eligible to participate in the betting.

If two or more players have equal hands in the showdown, the pot is split equally.

Any remaining chips are carried over to the subsequent transaction.

Prior to starting the game, it is customary to agree on a limit for bets and raises in the poker stage.

For instance, if a limit of ten is agreed upon, no player may place an initial bet greater than ten or increase the stake by more than ten chips in addition to the amount required to call the prior bet or raise.

This level is the most reminiscent of Rummy, in which cards are used to form sequences and melds.

In order to play a game of Michigan, all players must pick up their cards and put them back together.

Play begins with a card being shown face up in front of the pot winner in the poker stage.

Supposing there is a tie for the pot, this means that the first winner in clockwise sequence starting from the dealer’s left will begin.

The led card may be of any suit but must be the player’s lowest card in that suit (although it doesn’t have to be that particular suit.

They can have a lower card in another suit).

The next higher card in the led suit must be played by the person who has that card, and they must put it face up on the table in front of them.

There is no other option except to continue playing until either an ace is achieved or no one can play since no one has the next higher card of the suit.

“Stop Cards” are cards on which no other cards can be played since the next higher card of that suit is either in the spare hand or has already been played.

To continue, you must play another ace or stop card and so on until you have exhausted your options.

This player must play the lowest card they possess in the suit they choose to lead.

Once a halt is reached, the player holding the next higher card in the suit led plays it.

There are no more cards.

Thus, the play finishes quickly when someone runs out of them.

The person who plays all of their cards wins all of the chips in the “kitty” area on the layout, and a number of chips equal to the number of cards each other player still has in their hands.

Because all of a player’s remaining cards are in the same suit that was just played, the turn to play is passed to their left-hand opponent.

This means that if that player also has nothing but that suit, the turn to start passes around the table until a person is found who has a different suit.

All players must contribute one chip for each card they have remaining in their hands at the end of the game if no one has another suit.

Thus, there are still three chips to be won in stage three of the next deal, and they remain on the layout.

Tripoley is a challenging game, but once you get acclimated to the three phases, it’s a lot of fun!

Therefore, if you’re searching for a fun and challenging card game for groups, give Tripoley a try.

However, you can always check out our fun games like Follow the Queen Poker and Chase the Ace card game or other card games.