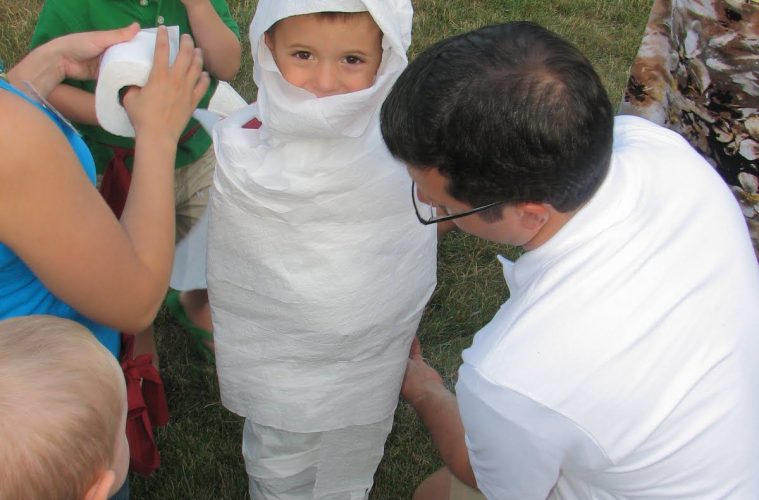 How to Play the Mummy Wrap Game — Rules and Instructions

Planning your kid’s birthday or Halloween party can be quite tasking, most especially when it comes to creating activities to keep your guest engaged and entertained.

The Mummy Wrap is one of such games that can guarantee you the much-needed fun.

This game is suitable for children of all ages, and adults too can take part in the fun. Also, you can play at any time of the year provided you have all the necessary requirements handy.

Basically, players take turns to wrap a selected person up like a mummy. This person will hold on to one end of the toilet paper in his/her hand, and the other team starts the wrapping when the music starts.

You can play some cool Halloween songs such as “Monster Mash” to lighten up the mood on the play floor and also serve as the timer for the game. Wrapping must stop once the music is turned off.

Equip yourself with some inexpensive supply of loo rolls or toilet paper to start playing the game. Each contestant gets a roll per round.

To make the game somewhat challenging for the older kids, the light can be turned off while the music is on. That way, they get to catch all the laughter.

The goal is to be the first team to cover up a team member in 360-degree spins, like a “Mummy” with toilet paper without shredding it.

The team with the best-wrapped mummy wins the game.

The Mummy Wrap is straightforward to play. It can be played by at least 4 players or up to 10 teams, each with 1 or 2 rolls.

Apart from the rolls, you might also want to consider fitting the theme with streamers for typical Halloween colors, in case you want to play the game at a Halloween party.

You will need a large supply of rolls that are cheap and not too fancy. The more the sheets that come with the roll, the better for the game.

Setting Up Your Game

This game is pretty easy to set up but could use some parental guidance if available. The first step is to divide the contestants into at least two teams. Allocate an equal amount of paper to all the teams and have a timer ready.

Before starting the music, ensure you agree on how much time each team will have to cover up their Mummies. The steps are as follows:

Can the Mummy Wrap get any harder?

The game is known to extremely easy to play for kids, and the rules are not so many. However, there are options available to be followed to make the game a bit tasking.

It comes in various versions, and some can be really complex for participants to handle.

Is Mummy Wrap scary for kids?

Wrapping someone up in toilet paper is totally harmless to players and viewers.

Using the tips in this post, you can easily learn how to play the Mummy Wrap game with kids and friends.

How Do Air hockey Tables Work

How To Play Horseshoes Rules And Gameplay Guide