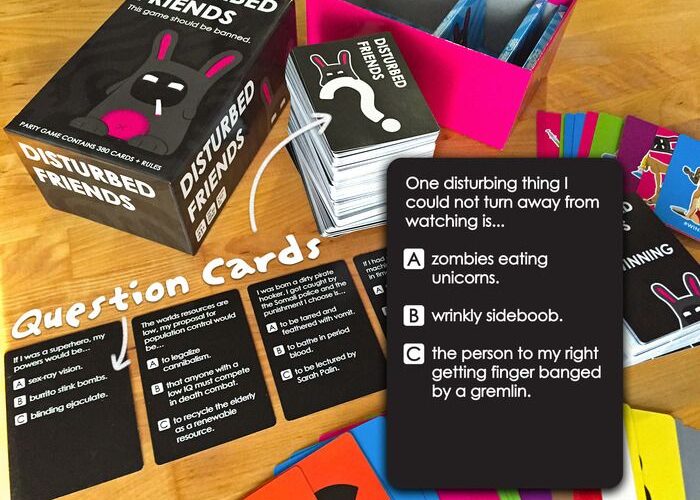 The Disturbed Friends is an intriguing game for adults that’s worth checking out.

You may agree with this after just a few minutes of playing, but you’ll be having so much fun that you won’t even notice.

It’s not about who wins or loses in Disturbed Friends, but rather about generating awkward discussions.

It’s also possible to discover gruesome or esoteric details about your friends.

This game allows you to find out who among your friends is the most disturbed (it could even be you!).

Disturbed Friends is a party game in which you can find out how disturbed your friends are, or, more accurately, how disturbed they believe you are.

Each question card will expose you to horrifying events, immoral debates, and sexual scenarios that will rapidly place you in the most awkward position imaginable!

They’ll all try to guess what ludicrous response you’re going to come up with.

Worse yet, which scenario is more likely? There is a good chance that your friends’ opinions will change after playing this game.

It’s possible to prolong the gameplay, increase the diversity of questions, and increase the number of players by purchasing expansion packs!

The game’s Kickstarter campaign was a massive success, raising more than 14 times the money required to make it a reality.

Additionally, the game includes a ‘Suicide deck,’ which some found so upsetting that it has been removed from all retail outlets.

Separate the cards into Answer Cards, Question Cards, and Winning Cards to set up Disturbed Friends.

After that, the Question Cards will be shuffled and placed face down in the group’s center.

Next, arrange the Winning Cards in a convenient stack for all participants.

Finally, each player will be provided with three Answer Cards labeled A, B, and C.

You can use any technique you wish to determine who starts the game.

For example, try to pick a player who has taken a drink or a bathroom break.

The judge is the first person to take a Question Card from the deck. After that, for everyone to respond, they will read this question aloud.

Then, by placing an answer card in front of them, each participant will submit an answer they believe the judge will choose.

Finally, A, B, or C are selected from a deck of voting cards and placed face down on the table.

After all of the players have entered their answers, the judge will reveal what their answer actually was.

A Winning Card is awarded to each player who correctly guesses.

Players that made erroneous guesses forfeit any points they would have accrued.

The game continues until a player has accumulated 10 Winning Cards from the other players.

The game is completed when a player has accumulated ten Winning Cards. This player wins the game!

If you enjoy this game, expansion packs are available that have even more screwed-up cards than the standard pack.

This perplexing Friends Expansion Pack can be played as a standalone game or a supplement to the original.

Unfortunately, it contains 110 additional cards from the worst game ever created.

Now that you understand how to play the game, I believe it’s reasonable to assume you’ll be playing it with a drink in hand.

As a result, the supplementary drinking rules are pretty straightforward.

Along with selecting the best card, have the judge select the worst card.

Then, take a drink from the individual who contributed the worst card.

By the end of this game, your self-esteem may have been shattered, and your drink will almost certainly be empty.

Is there a PG-13 version of Disturbed Friends?

No, not at the moment. Due to the game’s mature content, only one version is approved for ages 21+.

The disturbed friends game is a pretty savage but intriguing pastime.

So, if you want to know what your friends think of you or what you think of them, then you’ve got to try out this game.