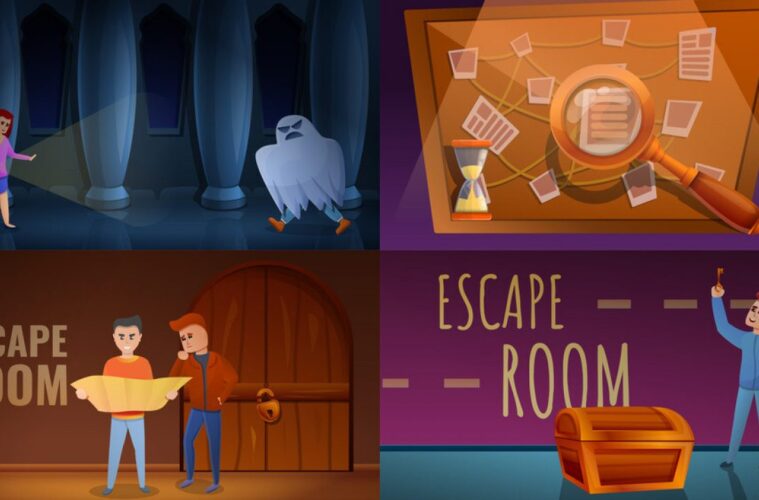 Escape rooms are thrilling for people of all ages, and you can simply make one at home with items found about the house.

We’ve outlined a list of ten escape room ideas that you can undertake at home or in any room, with or without children, adults, or children, for birthdays or just for fun!

The more puzzles you incorporate into your escape room, the more challenging it becomes and the longer it takes to finish.

Take a look at ten escape room game ideas for inspiration on designing the ultimate escape room at home!

The most frequently employed puzzle by escape room designers is concealing tangible objects across space.

That is not to say you should avoid employing hidden objects; rather, you should be inventive in your approach.

You can use light in various ways in an escape room.

Light can be utilized to expose or conceal clues.

Additionally, it can be used to generate the atmosphere, supporting your theme and assisting your players in becoming immersed in the setting you’ve built.

Consider your theme while deciding on the sorts of lighting and light effects to utilize in your escape room.

For example, while a black light may suit a nightclub or bio lab concept wonderfully, it may appear out of place on a pirate ship or in a castle dungeon.

While sophisticated mathematical puzzles are frequently discouraged because you cannot forecast your clients’ education level or math competence.

It is generally safe to assume players can count.

Substitution of Symbols Using a Key

Generally, symbol substitution is a straightforward process of comparing provided symbols to a key and associating them with the letters or numbers they represent.

While this is a very simple puzzle to solve!

Having one at the start of a game might give players an early victory and the confidence and incentive to tackle tougher riddles later.

To increase the difficulty of a symbol substitution puzzle, position the symbols in one room and the key in another, requiring people in separate rooms to collaborate to solve it.

Use Something in an Unusual Manner

Not all objects must be utilized for their intended or most common purpose.

By providing objects that appear to be set decoration but may be handled in unconventional ways to fulfill goals.

If players require utilizing something, you might include the assistance in another escape room challenge.

There is a substantial dispute among escape room operators over the appropriate use of algebra and mathematics in escape games (instead of counting or basic calculation).

Some escape game players anticipate difficulties they may not be prepared for and are aware that they can request hints if they become stuck.

Others argue that all knowledge necessary to solve the riddles in a room should be incredibly simple or explicitly presented by a prop or another problem.

An approach that would satisfy both sides of the issue would be to include mathematical problems and provide alternate methods of solving them for players who lack the necessary skills.

Numerous escape game riddles rely on the players’ ability to see. However, there is no reason to disregard the remaining five senses!

Utilizing sound as a puzzle element can be an intriguing approach to spice things up a bit and provide some variety for players.

As with light, sound may complement your theme and completely immerse your customers in the environment you’ve created.

Additionally, you might utilize unexpected, loud noises to distract or intimidate players if your theme permits.

As with algebra and mathematics puzzles, word puzzles frequently demand additional knowledge that some players may lack.

Consider providing additional solutions for completing word puzzles, mainly if your country receives a high volume of tourists who are not native speakers of the language.

One of the most effective methods for immersing players in your fictional universe is to create physical barriers for them to overcome!

Whether they are forced to crawl out of a serial killer’s cellar or clamber over debris to fix a damaged escape pod!

Allowing players to physically interact with the environment significantly increases the sense of realism.

Note: Not every player is physically capable of crawling, climbing, or traversing obstacles.

Ensure that you include the required level of physical activity in your room description so that consumers can prepare accordingly.

While some escape rooms make extensive use of actors, others communicate with players exclusively via their hint systems.

Like increased payroll, costuming fees, and contingency preparations if actors call in sick or fail to report to work.

It’s no surprise that escape room riddles rarely include the use of one’s sense of taste.

A player’s pleasure in a game might be adversely affected by the mere worry of tasting something they don’t like (or worse, throwing up!).

Most will assume that they are not supposed to put anything they find in an escape room in their mouths because they respect the decorations and furniture.

You’ll need to discover a discreet approach to let players know that they can put items that appear tasty in their mouths.

Also, they won’t be forced to taste anything that makes them sick if you decide to employ the sense of taste in your chamber.

Remember to keep to the topic you’ve chosen, no matter what.

All of your decorations and setups should be centered around the theme you’ve chosen.

Create difficult activities to push gamers beyond their comfort zones.

Take group images and share them on social media by providing iPads for each group.

Use smells and music that fit the occasion. The game should be enjoyable, so make it that way.