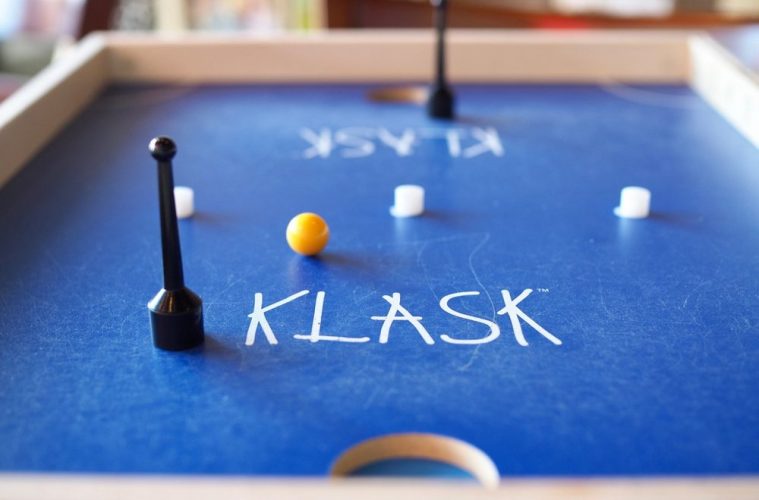 How to Play Klask Game – Basic Rules and Instruction

Klask is an expeditious Danish game with an ingenious control system.

Your only pawn must both guard your goal and hit the ball into your opponent’s.

With a magnetic handle, you direct your pawn from beneath the table game board.

And to stay ahead, you’ll also need to dodge the magnetic hurdles on the field, which will adhere to your pawn if you get within its reach.

To achieve six points and win the game, you need intense coordination and quick reflexes.

Klask is a mini and unambiguous form of air hockey but without air. This version makes use of magnetics and has some rules that are different from the original.

Carrying it with you isn’t a problem since it’s very small and doesn’t take up much space.

Although it can only be played at the same time by two people, you can effortlessly layout a king-of-the-hill rotation or tournament style, depending on how fast the games are.

Klask is a “physical” game with more hands than your conventional board or card game. Take a look at the game rules to help you get started!

How to Play Klask – Rules & Instructions

Klask is a fast-action rebound magnetic two-player game with aiming and banking, plan of action, and expertise.

The game is comparable to air hockey and is played on a wooden board called “The Pool”.

The Goal of the Game

You must also be careful to maintain control of your striker or avoid falling into your side goal, as this will score a point for your opponent.

The 1st player to get 6 points wins the game.

Note: Ensure to set the magnet pieces with the magnets turned upward to stop them from deviating from the striker.

Each player’s attack and defence instrument is called a “striker”, a one and half inches tall magnetic figure that looks like a chess pawn.

The striker is navigated by a steering magnet, a similarly sized cylindrical piece that is held below the board.

Below the table, a partition separates the table into halves to prevent you from moving your striker into your opponent’s section without losing control of it.

The magnets are potent to keep the striker firmly attached to the board so that you can quickly and smoothly move it where you want it.

Klask utilizes a single non-magnetic ball, rather than a puck as in air-hockey.

There are four ways to get points in Klask.

The primary method is to get the ball into the opposing goal, i.e. into a ~1-inch cubbyhole in the middle of every end of the pool.

If your striker lands in your own goal, it is a “Klask”, and the opponent gets one point.  This affects defence strategy because it can easily happen that you crash in your own goal while defending it.

When each round begins, three smaller disc-shaped magnets called “biscuits” are placed in the center of the board at their marked position.

The biscuits are attracted to strikers magnetically.

Therefore, if two or more are affixed to your striker, the opposing player receives a point, and the round is over.

This additional obstacle contributes to the game strategy, as the biscuits will bounce all over the whole board during extended play.

Losing control of your striker in the opponent’s area and being unable to get it back to your side, your opponent also gets one point.

Checks are moved on one side of the game board to record the score.

A game is played up to six rounds, and you can only get one point per round.

Klask’s rules are simple, but to be a winner, you’ve to exert total control.

In addition to scoring a goal, points are also collected when a player makes a mistake. If your striker lands in your goal, your opponent receives one point.

If your striker coincidentally happens on two (or all three) magnetic hurdles, your opponent receives a point.

And if your striker loses contact magnetically with your handle, your opponent gets one point. The 1st participant to reach six points wins the game!

Other Rules to Note

It is not allowed to maneuver the on-board white magnets by using the control magnet underneath the board.

The game continues, even when a white magnet falls over the side of the board.

If the ball drops over the edge of the board, place the ball on the closest starting point to the place where it fell over, and the game continues.

Despite the expertise needed to win in Klask, you don’t touch the ball or the striker directly. Instead, you control a separate handle below the board.

A strong rare earth magnet gets through to the playing area and reaches the magnetic field of its companion inside your striker. Move your handle, and the striker will follow.

One day Bertelsen got bored after work and wanted to develop a game that he could play with his wife and two children.

7 years later, and the game wins an international community award with a lot of tabletop game awards, including a recommendation from the prestigious Spiel des Jahres.

Part of Klask’s fun is to become super competitive with something that feels so silly.

Frequently Asked Questions about How to Play Klask Game

How large is the playing area?

What prevents you from accidentally hitting the other player?

The legs that raise the game off the tabletop also serve as a partition, dividing the area under the deck in the middle into two halves.

And that’s all we’ve on how to play Klask game!

Fricket Rules – How to Play Fricket

How to Play Bananagrams for Beginners