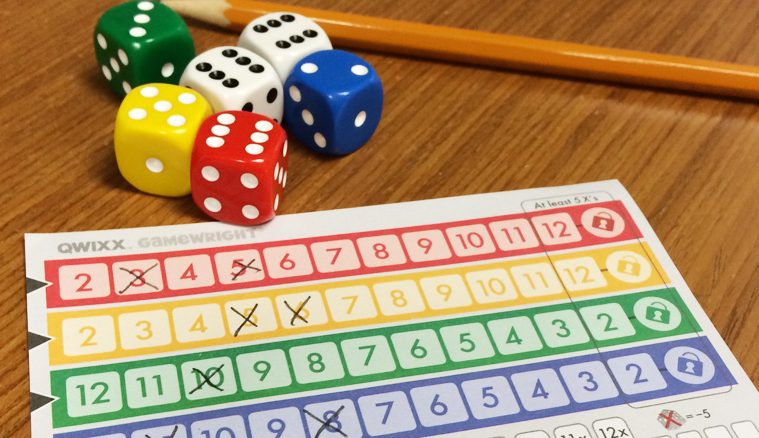 How to Play Qwixx Dice Game – Rules and Instructions 2020

Qwixx is a dice game that can be played with 2 white dice and 4 colored dice. It’s a quick-playing dice game where everyone takes part regardless of whose turn it’s.

In the game, which is meant for 2–5 players, participants will race to amass the maximum score while ensuring sections of the score-pad are locked out.

Since the rules are straightforward, it’s family-friendly and can even take eight players and more.

Each player is given a scoresheet that contains the numbers 2–12 in rows of yellow and red, in addition to other numbers 12–2 in rows of blue and green.

You score points by marking off as many numbers as you can. However, you can only mark a number off if it’s by the right of all marked-off numbers, which you’ve in the same row.

Once you follow our pro tips in this guide, playing the game will be a walk in the park. Let’s get started and show you how to play Qwixx.

First, we start with the fundamentals:

Aim of This Game

Your object is to earn the highest points by crossing out as many numbers as you can in the 4 color-rows while steering clear off penalty points.

Each player will grab a score sheet. They’ll also get something to write with.

Before you play, one basic rule of Qwixx to bear in mind is that in each of the 4 color-rows, numbers have to be crossed out from left to right.

No need to start with the number that’s farthest to the left. However, any numbers you skip can’t be crossed out afterward.

Let’s now explore the facts about how to play Qwixx:

In this game, each player controls their own score sheet.

The players will be crossing numbers off from 1 of the 4 color-rows on their own score sheet throughout the whole game.

Players can cross out a number in a row so long they abide by a rule. And that’s, you can’t cross a number off from a row left of a number already crossed off in the same row.

Having said that, let’s look at the gameplay.

Each round sets off with the active player rolling all the dice; then, the players will perform 2 actions.

In the first, the active player will add up the numbers that are rolled on both white dice.

They’ll let the other players know what this number is.

After that, all the players will cross out a number from one of their rows matching the total that was rolled above in the dice.

The players are allowed to cross a number off from any color row. And that mustn’t necessarily be the number on the far left of the row.

When you’re crossing a number off, you need to note that you’re disallowed from crossing off any numbers any longer from that row left of the number you crossed off.

If any of the players wants, they can elect not to cross out any number from their score sheet.

The active player (not from the other players) will now have the option to perform a second action.

The active player can add one of the 2 white dice to one of the color dice and can then cross the number off from the corresponding color row.

Before the game enters the next round, the players will determine if the active player incurred a penalty.

If the active player couldn’t cross off a minimum of 1 number from either of the 2 actions they performed, they’ll be penalized.

Serving their penalty, the player must cross off one of their penalty boxes, and 5 points will be deducted from their score when the game comes to an end.

How to Lock a Row

As the game progresses, players will start crossing numbers off, moving closer and closer to the right side of the color rows.

A player will ultimately cross the last number off by the right of a row.

For you to be eligible to cross off the last number in a row, you must have already crossed off 5 numbers in the same row.

When you cross off the last number in a row, you’ll also cross the lock symbol off.

This symbol counts as another space for the row when scoring is done.

On crossing off the lock for one of the colors, that color becomes locked for the remaining duration of the Qwixx game.

The corresponding color die is discarded from the game. This means that players won’t be able to cross out numbers any longer from that color.

Another thing to note is that multiple players can cross off the same color during the 1st action.

If a color gets closed during this 1st action, the active player won’t be able to earn any score from that color during the 2nd action.

Qwixx can come to an end in one of two ways.

The game either comes to an end when one player crosses off their 4th penalty box or 2 of the colors have got locked.

Once any of these two things take place, the game is completed immediately.

Then, the players will add up their scores.

There’s a table at the bottom of each score sheet. To do the scoring, players will score each of their color rows separately.

They’ll count up the number of spaces they’ve crossed off in each row and will earn points working with that table.

Also, the players will add up their penalty points, where 5 points are deducted for each penalty.

The players will add up all their points to give the overall score they’ve accumulated.

The winner of the game is the player that records the maximum points.

An essential aspect in mastering how to play Qwixx is the rules.

In this game, the overarching rule is that in each of the 4 color-rows, numbers have to be crossed out from left to right.

While they don’t have to be crossed out in a sequential manner, once you pick a number to cross off in the row, you’re not allowed to go back and cross off numbers before it in that same row.

To make things easier, you can designate this by drawing a horizontal line through the dead spaces on your scorecard.

Players are to roll dice to decide the person to go first–high roll wins.

Play starts when the active player rolls all 6 dice.

The active player will now declare the sum of the 2 white dice.

All players taking part in the game can then cross off that number from any of the color rows on their score sheet.

Players mustn’t necessarily cross off a number if they don’t wish to.

The active player will then add up the sum of 1 white die and any one of the colored dice.

Only the active player may then cross off that number on the corresponding color row on their score sheet, and they may choose not to cross off the number.

If, after the 2 actions on the turn, the active player hasn’t crossed off a minimum of 1 number, they’ll mark an “X” on a penalty box.

Thus, 5 points will be removed from their score at the end of the game.

Play continues this way for all players.

Now that you’ve learned how to play Qwixx, you can enjoy an exciting gaming session with your buddies and earn some accolades!

How to Play Klask Game

How to Play Azul Game

How to Play Qwixx Game