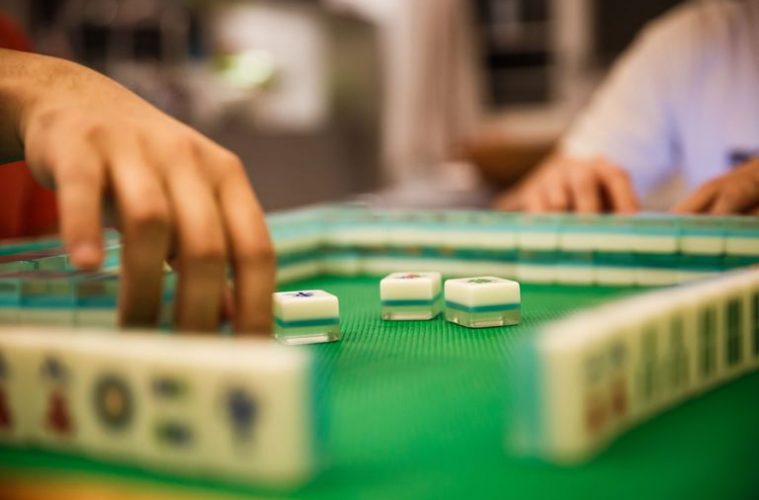 How to Play Filipino Mahjong — Rules and Instructions

Filipino Mahjong is a fun, gambling-type, and fast-paced version of the traditional mahjong game.

It’s played using a 144-tile mahjong set that comprises four types, which are balls, sticks, chars, and flowers, making 16 tiles for each kind.

In each Filipino mahjong tile type, there are 4 sets of tiles that are numbered from 1 to 9.

Just like all other kinds of mahjong, you start this game by shuffling the tiles and making the wall. The dealer throws the dice, and the player that will break the wall is chosen by counting anticlockwise, starting with the dealer.

Then, the selected player will throw the dice again and add the two tosses up. Let’s learn how to play Filipino Mahjong.

Before the start of the game, each player will sit on a side of the table, and all tiles are placed face-down & shuffled.

A throw of dice is used in determining the playing order. And the player that tosses the highest value is the dealer.

Then, the shuffled tiles are arranged into four walls, two tiles high and eighteen tiles wide, positioned in front of each player.

After that, each player will draw six tiles to create their starting Filipino mahjong hand, beginning with the top of the dealer’s wall, eight at a time.

As soon as all players have got their tiles, Flower Tiles will be set aside as dictated by the game rules, with tiles drawn from the wall to take their place.

Filipino Mahjong involves 4 players, and all you need to play the game is a standard Mahjong set containing 144 tiles.

The game instructions are straightforward to understand and are one of the easiest among all versions of mahjong.

The types of tile in this game are simplified, unlike other Mahjong types. Mahjong tiles are Suited Tiles and Flower Tiles.

If you know the other versions of mahjong, you’ll see that the Flower Tiles contain the Dragon, Season, Flower, and Honor Tiles. The tiles are outlined below:

In Filipino Mahjong, the Flower Tiles don’t serve any purpose. That’s why when drawn, they’re set aside immediately.

The Suited Tiles contain numbered tiles, which are used to make sets. Forming these sets plays a key role in winning a Filipino Mahjong game.

Each turn will start with 2 possibilities: It’s either a player draws from the wall or pick the last discarded tile.

As the dealer has their turn first, he/she has to draw from the wall. Then, to end the dealer’s turn, a player will discard 1 tile from their hand.

There are 2 ways of disrupting this turn — by stealing or winning.

In Filipino Mahjong, the object is to complete a winning hand. A Filipino mahjong hand consists of five sets and 1 pair.

While sets are combinations of three or four tiles, pairs are 2 tiles of the same type. Mahjong sets include Pongs, Chows, and Kongs.

Pongs: These are 3-of-a-kind combinations. They can be created with any Suited Tiles.

Chows: Chows are sequences or straights. They are produced from 3 consecutive number tiles from the same suit.

Kongs: These are 4-of-a-kind combinations, which are similar to Pongs. But, since Kongs make use of more than three tiles, they have to be declared and positioned face up before claiming the win.

Also, Kongs can be created by melding the final duplicate to Pongs. And any player can do it.

There must be 5 sets and a pair in a winning hand, making 17 tiles in total. As each hand always contains sixteen tiles with a single draw at the start of a turn, a player that needs the last tile to win the game is “waiting”.

As soon as a player draws the last tile, either through a claimed discard or from the wall, they have won.

The payout takes place according to the conditions explained below in the Scoring section.

Jokers are a standard feature in the American Mahjong sets. They can also be used in Filipino Mahjong.

Though not so common, they’re utilized as wild tiles, which are made use of in any melds.

It’s crucial to master the rules of the game to learn how to play Filipino Mahjong:

There are some special rules to resolve any conflicts that occur:

How to Do the Scoring

Scoring in Filipino Mahjong, unlike other types of Mahjong, doesn’t base winning conditions on only a particular scoring system. Instead, scoring is carried out at the payout stage.

Winning in this game primarily comes after a “waiting” stage. In this stage, a player waits for the winning tile that can result from a draw from the wall or through a discard.

Further, if the winning mahjong hand gets assembled from a discard, the discarding player must pay double the set amount.

If the winning mahjong hand is assembled from a draw off the wall, all players are required to pay double the set amount.

Also, we have specific conditions that could lead to doubling of the payout. If the dealer wins instantly through the 1st draw from the wall, the payout becomes doubled.

Additionally, if, during the game, a player completes a set of thirteen Flowers, 25% (a quarter) of the payout gets awarded immediately.

If a player wins a game without any Flowers, the payout will receive a 25% bonus.

Winning hands contain five sets and 1 pair. As an example, we have a winning hand that made up of three Pongs, two Chows, and a pair.

Another example (though rare) is a winning hand consisting of 7 pairs and a Pong, giving a 50% bonus payout.

Also, there are special mahjong hands like those that contain only Pongs, Kongs, and pairs, or even hands entirely made up of a single suit.

But unlike other Mahjong versions, these hands are not taken into consideration during scoring unless otherwise agreed upon. Generally, if a hand is seen as special, all players can reach an agreement to double the payout.

Strategy and Etiquette of the Game

When it comes to learning how to play Filipino Mahjong, other key aspects to note are strategy and etiquette of the game.

Goulash:  In this version, at the beginning of the game, each player will select 3 tiles they’d like to discard, and they’ll put them face down in the center of the table.

Then, the mano will pick one tile from each pile (not including his/her own).

Moving in a counter-clockwise direction, each player will take three tiles, and then, the game goes on normally as the traditional Filipino Mahjong.

Joker: At the beginning of the game, the dice is tossed again, and a player will count the stacks with the resulting number, after which he/she will then turn over the Filipino Mahjong tile.

It’s this tile that serves as the Wildcard or Joker of the game.

Re-Die: This version involves switching seats. Tiles numbered from one to four are shuffled and positioned at the middle of the table. Each player will take a tile, and the number will determine where the new seat will be.

The first player to earn 5 markers wins an extra dollar (or any other amount agreed upon at the beginning of the game).

After that, everyone will give back their chips to begin another Jai Alai. You may carry over a marker into the next Jai Alai.

For instance, if you have four markers, then Bunot, you’ll end up with six markers. You’ll return five markers and carry one over to the next game.

Here are some common questions people who are learning how to play Filipino Mahjong ask:

How many players are required to play Filipino Mahjong?

The game is perfect for 4 players, but the same gameplay can be enjoyed by a minimum of 2 players and a maximum of 4 players.

How is Filipino Mahjong different than Classic Mahjong?

The whole Filipino Mahjong vs. Chinese Mahjong issue is interesting.

Classic Chinese Mahjong is more complicated than Filipino Mahjong as Flower tiles serve another purpose, and you can’t win without satisfying certain conditions based on the rules.

How many rounds are in a Filipino Mahjong game?

A game lasts 4 rounds, though you can decide to extend it based on your taste.

Can I play Filipino Mahjong online with friends?

With online Filipino Mahjong simulators, you can enjoy the game conveniently without going through the stress of shuffling and counting tiles.

The Pinoy app is one of the best Filipino Mahjong apps and works as a great alternative if you prefer playing the game on your iPhone.

Having gone through this guide, we hope you have been able to learn how to play Filipino Mahjong.

It’s a fun, gambling-type, and fast-paced variation of the traditional mahjong game. Play involves the use of a 144-tile mahjong set consisting of four types — balls, sticks, chars, and flowers — making 16 Filipino mahjong tiles in each type.

How to Play Japanese Mahjong

How to Play the game of Fricket

How to Play Bananagrams Game Rules