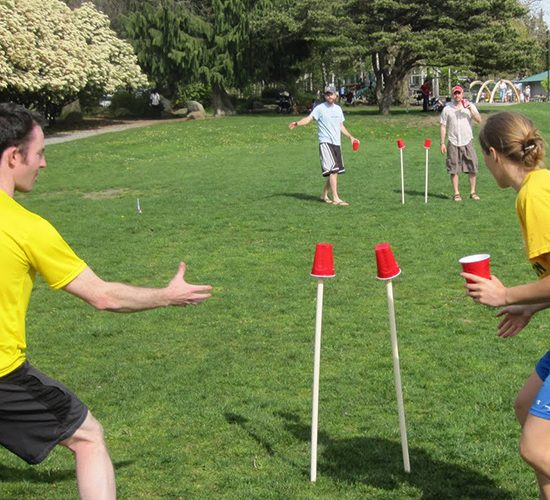 Fricket Rules — How to Play Fricket Like a Pro!

As a fun outdoor frisbee game, Fricket is known by many different names such as the original Disc Pole game, Cups, Disc Cricket, or Suzy Sticks.

You might have guessed it: “Fricket” comes from a combination of “Frisbee” and “Cricket”.

It’s a game, which first became popular back in the 1990s, on the heels of its initial appearance in its own tournament, whose maiden edition held in 1993.

In Fricket, the aim is to earn points by either throwing the frisbee between the wickets or knocking off the cups from your opponent’s poles. You’re to set up 2 poles 15” apart to create the goal on each side.

It’s straightforward to play this game, and the necessary tools required are just four 4–5ft sticks, frisbees, along with a handful of plastic cups to begin play.

It’s an entertaining outdoor game for 2 teams, which is played using 2 pairs of posts, or wickets as well as flying discs. Let’s show you how to play Fricket!

The game in its bare format involves players slugging it out with each other, up to 2 vs. 2 (2v2), intending to throw your frisbee to knock your opponent off the poles they’re hanging from.

Fricket can be designed using homemade appliances or offered for sale as a standard set for your backyard activities.

It’s ideal for players of all ages.

The concept of throwing in this game is simple. However, where the challenge lies is in making accurate throws.

Poles, bamboo stick, wickets, and the likes: To play Fricket, one of the basic items you need is the right type of pole (or stick). This will be used to balance the objects you’ll be aiming to knock over.

The recommended length of your poles is in the range of 4 – 5ft, while the diameter should be 0.5 inches.

What are some examples of quality wickets? You can find such in bamboo garden sticks, steel/plastic rods, or wooden dowels.

If you’re playing Fricket with children, you can make use of smaller wickets for the younger ones so they can have a better chance.

Flying disc or frisbee: To knocking off the cups, the most effective tool in this game is a frisbee, which is also called a flying disc.

Due to its diameter and aerodynamic build, it can soar through the sky at different distances. And it’ll still have a strong enough presence to make contact with obstacles.

Thus, more points will be earned if the other team member can catch the disc without it making contact.

This is because it‘s even harder to aim a frisbee past a large barricade.

Four 12-ounce or 16-ounce plastic cups (additional cups could be useful): These cups are to be put on the sticks to allow them to be knocked out of their place by players.

They’ve to be carefully placed atop the poles, so they stay slightly wobbly to be knocked over.

The cups shouldn’t be made to sit too tightly since the players won’t ever pop them off if that’s done.

Plastic can be fragile. For this reason, ensure the poles don’t poke through them completely.

Scoring table (this is optional): Since points will be utilized in Fricket, we recommend using a scoring table or board to monitor every player’s scores.

A scoring table can come handy when you’re playing long matches or when you’ve many players partaking in the game at the same time. This can also help if your memory is poor.

There are full Fricket sets with the whole package on stores online. Also, we’ve such products with brand names that don’t have a handful of items but still retain the major premise, such as Bottle Bash.

Setting up the Game

To play, a larger area is required. Hence, the level ground is your best choice.

As a result of the needed space, it can also serve as an excellent beach game or camping game for adults. Yea, that sounds like fun!

In the official Fricket rules, the wickets are required to be 40ft (about 12m) apart. If you’re taking part in a tournament, you’ll need to play with these rules.

But for practice or casual play, you can opt for 30ft apart, especially for your first game. As you hone your skills, you can move back.

Position the 2 poles at each end so that they form a wicket, just like a goal.

You should now anchor the poles into the ground, ensuring they’re around 15 inches apart.

In the last step, gently put a cup upside down on top of each stick, and you’re all set for a fantastic time.

On setting up everything you need, the next step is to look at the gameplay.

As stated earlier, Fricket is played with points, and any player that first earns the maximum number of points wins the game.

To set the duration you prefer for the game to last, you can peg the maximum number of points at a value within 11, 15 or 21.

In 2v2 matches, the normal practice is that the teams will switch sides after earning half of the points (6, 8, or 10).

Let’s look at how these points are allocated:

1 point: This is awarded when a player knocks a cup off. And the cup falls on the ground.

2 points: These are awarded to the opposing side if their opponent knocks the cups over. However, the opposing team can try to catch it with one hand before it lands on the ground.

2 points: 2 points are earned by a player, who can throw the frisbee between the 2 wickets, without the cups getting knocked off, and the other team member grabs it. This rule is only valid in team matches.

Apart from these, players/teams can also earn other points in rarer circumstances in a bid to clarify any situational occurrences.

Double points: As for double points, these are awarded if the 2 cups are knocked off using just one frisbee throw.

Also, this rule applies to a situation where the 2 cups are caught by the opposing team. This implies they’ll be given double points instead.

Bonus or canceled points: If the catching player inadvertently knocks a cup over while trying to grab a knocked over cup, points will be gained if this second cup makes contact with the ground.

However, if the player also grabs the second cup, these awarded points won’t be added.

If you start bobbling the cup (by chance) before catching it correctly, this will be permitted.

So long it’s grabbed with just a hand, not the two — and it’s not pressed against the body — the points will count.

In Fricket, you’re to aim your frisbee or cup on the pole and knock off the cups till they land on the ground.

For every cup knocked over, points get allocated.

Bonus points are earned in team matches if the receiving team member grabs the cup before it lands on the ground or if they grab the frisbee after flying past the sticks without making any contact with the cups.

By the end of some rounds, the team that records the maximum points is the winner.

Some Violations to Note

While learning how to play Fricket, try to respect the rules and play fair. This will make the game as fun as possible.

Here are some violations to be mindful of:

Foot Fault: This applies when a throwing player steps beyond the wickets, and the receiving team has to say “foot fault”. In this scenario, the thrower won’t get any points.

Points that are awarded to the receiving team for a catch are added.

Should there be a contested foot fault, the flying disc will go back to the thrower to be re-thrown. There are no points allocated to either team for the disputed throw.

Goaltending: In goaltending, the receiving team is disallowed from touching the flying disc until it has crossed their wicket line totally.

In a situation where the throwing team makes a goaltending call, the disc is to be given back to the thrower so it can be re-thrown.

Also, the receiving team is disallowed from taking a position, which intervenes with the throw to be made by the throwing team.

Grounding: Another violation to take note of while learning how to play Fricket is grounding. If the flying disc makes contact with the ground before touching a wicket or passing between the wickets, the throwing team won’t get any points.

Further, if a cup gets dislodged and is caught legally by the receiving team, that cup is scored.

Wrapping up this write-up on how to play Frisket, we told you that Fricket was formed from the words, “Frisbee” and “Cricket”.

In this game, the object of players is to score points by either throwing the frisbee between the wickets or knocking off the cups from the opposing team’s poles.

How to Play Azul Game Rules