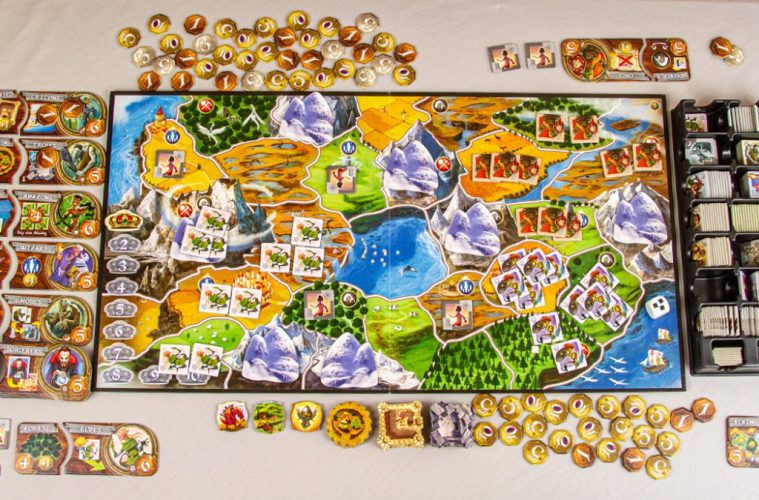 Are you a fan of interactive and inventive board games like Small World? If so, this guide offers you various options that you can play with your friends and have lots of fun!

Now featuring a new theme, Small World has won many awards, such as Games magazine 2010 Game of the Year and others.

Here are 10 alternatives to Small World you can add to your collection of games:

Catan is a multiplayer board game created by Klaus Teuber. It was previously known as The Settlers of Catan or Settlers. The title was first published in 1995 by Franckh-Kosmos Verlag (Kosmos) as Die Siedler von Catan in Germany.

Players assume the roles of settlers, where each of them tries to build and develop holdings while buying and trading resources. As players’ settlements grow, they earn points. The first person who attains a set number of points (usually 10) becomes the game-winner.

Catan and its several expansions are also published by Catan Studio, GP, Filosofia, Inc., Κάισσα, 999 Games, and others. This title became one of the first German-style board games that got popular in places outside Europe.

Over 22 million copies of Catan in 30 languages had been sold as of 2015. Regarding its gameplay, the players take on the role of settlers that are building settlements on the island of Catan. They establish settlements, cities, and roads for connecting them as they settle this island.

The game board — representing the island — comprises hexagonal tiles (hexes) of various land types, laid out in a random manner at the start of each game. Catan‘s newer editions depict a fixed layout in their manual that has been shown to be fairly even-handed through computer simulations.

They’re recommended for use by beginners. In 2016, various editions of this title were released with a standard fixed layout board in this configuration; the hexes that can’t be re-arranged.

As a player, you’ll build by spending resources, such as wheat, sheep, clay, wood, and ore, represented by these resource cards. Each type of land (except the unproductive desert) produces a specific resource. Forests produce wood; hills produce brick, with mountains, fields, and pastures producing ore, wheat, and sheep respectively.

Risk accommodates two – six players. It was invented by French filmmaker Albert Lamorisse in 1957. The title became one of the most popular board games in history and inspired other popular titles like Settlers of Catan and Axis & Allies.

The standard version of Risk is played on a board that represents a political map of the world. It’s divided into 42 territories, grouped into six continents. Turn will rotate among players controlling armies of playing pieces that they use for gaining territories from other players, and dice rolls determine results.

In the game, players could form and dissolve alliances. The object of Risk is to occupy all territories on the board in a bid to eliminate the other players.

This game can be lengthy as it takes many hours (and even multiple days) to complete. In the European versions, the structure of the game is such that each player has a limited “secret mission” objective, making the duration of play shorter.

Its simple rules yet complex interactions ensure adults, children, and families find it appealing. Risk is still in production by Hasbro. And there are many editions and variations of the game featuring popular media themes and various rules, such as video games, PC software versions as well as mobile apps.

As regards equipment, this includes a large tabletop board that depicts a political map of the world. The map is divided into 42 territories, grouped into six continents by color.

Apart from shared boundaries between territories defining routes of attack or defense, there are also various special trans-oceanic or trans-sea routes marked (for instance, the North Africa–Brazil route). The oceans and seas don’t form a part of the playing field.

Evo is yet another fascinating game like Small World. It’s a German-style board game designed by Philippe Keyaerts.

Evo takes three – five players. Published by Eurogames, it won the GAMES Magazine award for Game of the year 2002. It was also nominated for the Origins Award for Best Graphic Presentation of a Board Game 2000.

In 2007, it went out of print, but a second edition entered the market in 2011. In the primary game board, you’ll find two reversible sections. On both sides of each section, there are differently sized halves of a pre-historic island.

The island features hexes of four different types of terrain — “Cool,” “Hot,” “Cold,” and “Warm”. It also makes use of a separate board to mark the current climate and round number.

There’s another board showing players scoring and bidding progress. Each player is provided with a board for marking their dinosaur’s mutations. During bidding phases, the players’ scores are also utilized as money.

Players start the game with three Event cards, which are in a stack of “dino” tokens with multiple mutations — one “Leg,” one “Egg,” one “Horn,” one “Tail,” one “Parasol,” and one “Fur”.

Evo has a start-to-finish run time of at least two hours. To excel in this game, you have to be dedicated and play strategically.

Stone Age is a board game created by Michael Tummelhofer and published in 2008 by Hans im Glück. It’s a development game that has a Stone Age theme where players take control of a tribe with the aim of collecting resources and establishing a village with the most powerful chief.

Players are tasked with gathering wood, breaking stone, and washing their gold from the river. They trade without restrictions, develop, and expand their village, allowing them to attain new civilization levels. By striking a balance between luck and planning, the players will compete for food in the pre-historic time.

The game is ideal for two – four players, with a total run time of roughly an hour and a half.

In this board game, players take on the roles of the American Continental Army & Patriots against the British Army and the Loyalists. Players at each side attempt to gain control of the colonies, provinces, and territories.

They seek the aid of Native Americans, the German Hessians as well as French Army to birth a revolution successfully or suppress the rebellion. Each of the four factions makes use of their own deck of cards for moving their units into positions.

With custom dice, battles are resolved quickly. If you can gain control of a whole colony, province, or territory, you’ll raise a flag. When the game comes to an end (symbolized with the signing of the Treaty of Paris), the side that earns the highest number of flag markers wins.

Seen as one of the best “war games” released lately, 1775: Rebellion is an entertaining game to play if you find the strategy and domination aspects of the other games in this post exciting.

History of the World

Often abbreviated as HotW, History of the World is a board game created by Ragnar Brothers. It was originally published in 1991 and is yet another deeply complex board game that will delight players seeking more games like Small World.

History of the World is played by as many as six players in seven epochs. There are six epochs in the 2009 edition and 5 in the 2018 edition. Each participant in the game will play a different empire in each epoch.

The first edition of this game by Ragnar Brothers was released in 1991, featuring a tea-towel board. This edition sold out within a couple of weeks, says Steve Kendall, the Game Designer. Following Dutch, English, and German versions by different publishers, History of the World was published in 1993 by Avalon Hill.

After Hasbro’s purchase of Avalon Hill in the early 2000s, History of the World was re-released as a big box game.

This title is a board game designed in 2010 by Antoine Bauza. It was originally published by Repos Production, located in Bruxelles, Belgium.

One of the highest-rated games online has won over 30 gaming awards, including the inaugural Kennerspiel des Jahres connoisseurs’ award (2011). 7 Wonders has been rated by top game designers as one of the most popular board games of the last 10 years.

It combines the strategy of Small World and is a great option to consider when you’re looking for a riveting title to play. This game adopts the premise that you and the other players are ruling over one of the seven major cities of the ancient world.

With each turn, you’ll draw a card or play action cards for asserting your dominance over the city or receiving a boost later on in the game.

A tile-based German-style board game, Carcassonne accommodates two – five players. The game was developed by Klaus-Jürgen Wrede and published by Hans im Glück in 2000 in German, by Rio Grande Games (until 2012), and currently by Z-Man Games in English.

In 2001, Carcassonne won the Spiel des Jahres and the Deutscher Spiele Preis awards. The game is named after the medieval fortified town of Carcassonne in southern France that’s famed for its rock-solid city walls.

It has several expansions and spin-offs, and the game has also been released in many PC, console, and mobile versions. In 2014, a new edition was released featuring updated artwork on the tiles as well as the box.

You’ll find that the game board is a medieval landscape created by the players during the course of the game. Play starts with one terrain tile face up, with 71 others shuffled face down for you and the rest of the players to draw from.

This title is another board game similar to Small World and was designed by Bruno Cathala. In the game, four players move and manipulate the five tribes to control the fictional Sultanate of Naqala. Five Tribes, unlike the majority of worker placement games, starts with the Meeples already on the board.

While its rules are relatively simple, the game requires complex strategies for outwitting your opponents and gaining control of the most land. Players take a set of Camels, then they’ll turn markers of a color.

Overall, if you’re seeking an easy-to-learn game that requires strategic thinking, then Five Tribes is worth giving a try.

A board game developed by Philippe Keyaerts, Vinci resembles a dice-less variation on Risk featuring variable special abilities as well as an original decline mechanic. Vinci also shares some similarities with History of the World.

The meaning of Vinci in Latin is “to be conquered”. In 2009, its mechanics were re-implemented with many changes.

The title is based in a medieval-era Europe, where players compete with the aim of conquering, defending, and ruling over different territories until a player reigns supreme. Vinci‘s gameplay is complex yet incredibly fun.

It’s a cool game to play if you’re a fan of Small World as it offers more or less the same concept, though it’s based in real-life Europe and not a fantasy world.

Having gone through this post, we hope you’ve found a couple of games like Small World to consider when you need to have fun with friends. These games require some strategic thinking and are quite entertaining.