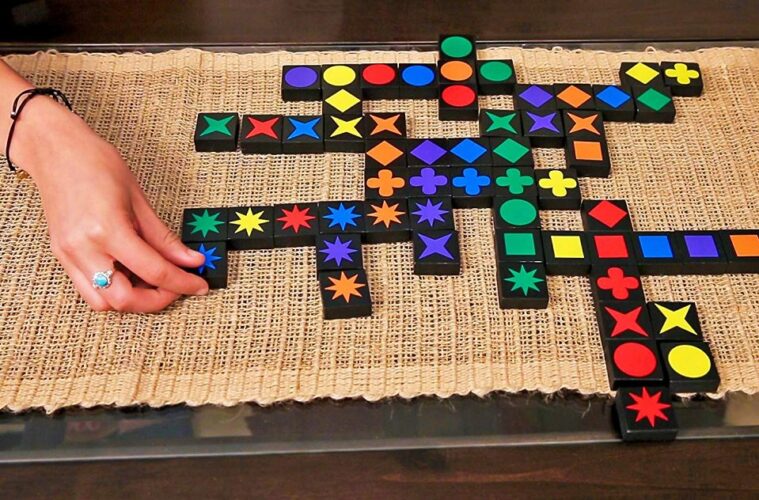 If you’re looking for enjoyable puzzle games similar to Qwirkle, then we’ve got you covered.

It was devised by Susan McKinley Ross and can be played by up to four people.

There are 108 colorful wooden blocks with six different shapes and six colors on each of them in the Qwirkle set.

Blocks with matching attributes can be placed by the first player (e.g., same shape or same color).

If the players share a characteristic, they can then arrange blocks next to each other on the table.

For example, you draw from the draw bag after each block is played to ensure that you always have a six-card hand.

Alternatively, you can use your turn to trade blocks from the draw bag for random ones.

Playing blocks and completing lines with all six shapes and colors results in points.

It’s game over when the draw bag runs out of cards, and whoever has the most wins.

Qwirkle is a fun strategy game that appeals to all ages, from children to adults.

Check out our selection of 10 board games that are comparable to Qwirkle if you’ve been playing it nonstop.

Ingenious holds the top rank on our list of games like Qwirkle because it features the same puzzle backdrop in which you grab pieces and choose from several placement alternatives.

While the scoring may alter, the gameplay remains similar to that of dominoes and sudoku.

This game is a cherished classic that adds dimension (literally) and color to the experience.

Of course, it will help if you lay tiles to get points for intricate connections.

The secret is that your score is equal to the hue with the lowest score, so you must always be spread out and balanced.

Blokus and Qwirkle are sometimes grouped as enjoyable abstract strategy games for the whole family.

Bernard Tavitian’s 2-4 player game is sure to delight anyone who has played games like Qwirkle.

Each player chooses a single color, and when laying it, it must contact another player’s corner but not on a flat edge.

The game is over when none of the players can put another piece.

Players earn points for each square their pieces occupy on the board after the game.

The person who accumulates the highest points is the winner.

Blokus is a simple yet highly strategic game, ideal for families or friends searching for other games like Qwirkle.

Istanbul, a 2-4 player game by Rüdiger Dorn, is ideal for anyone who has played games like Qwirkle.

The participants individually control a merchant and four assistants in this game.

Players take turns moving their merchants and assistants about the board, collecting items, earning money, and acquiring rubies – which are required to win.

Istanbul is not an abstract strategy game, as most of the games on this list are, but it does have several elements that fans of Qwirkle will like.

Istanbul’s strategic and tile-placing components are comparable to Qwirkle, and anyone looking for enjoyable and straightforward board games will find something to enjoy here.

Yinsh is included on this list of games like Qwirkle simply because it shares a trait that you will see a lot of.

It’s an excellent A-level game focused on the set collection and pattern design.

The puzzle here is more about how you move than where you place a piece, but if you’re looking for a superb abstract strategy game with some twists, this is an excellent alternative.

This is a high-quality pattern-creation and grid movement game.

In Yinsh, the board begins with five rings.

Each time a ring is relocated, a marking is left behind. On one side, the markers are white; on the other, they are black.

When a ring jumps over a marker, it must be flipped, causing its color to constantly change—games with two players last approximately 45 minutes.

Sequence is a well-known card game that is certain to appeal to anyone who enjoys games similar to Qwirkle.

Sequence is a 2-12 player strategy game designed by Doug Reuter for seven and above gamers.

In Sequence, players work in teams or individually to line up five chips on the ‘board,’ constructed entirely of playing cards.

You may discard a card from your hand and place a chip on the matching card on the board during your turn.

Following that, you draw another card.

Although the rules are straightforward, Sequence is yet brimming with strategy.

Sequence will appeal to fans of Qwirkle because of the process involved, and everyone, regardless of age, will like this tough game.

In the same vein as Qwirkle, Azul is an award-winning game about gathering the proper pieces and placing them in the right spots.

This selection approach uses a turn-by-turn draft instead of a forced shrinking pile, but those crucial puzzles within abstract strategic game rules remain.

One of the most remarkable features of this pastime is helping the king decorate with Portuguese tiles.

An excellent set collection and pattern-building game, Azul is a must-have for gamers.

It’s up to you and your opponents to design clever groupings of tiles that will earn you enormous points.

Alhambra is recommended for players over the age of 8, although it’s also a lot of fun for seasoned adult gamers.

Players attempt to populate their ‘Alhambra complex’ with as many distinct building tiles as possible in Alhambra.

Like Carcassonne, players draw four building tiles from a draw bag instead of one.

These are placed in the building market, and players purchase them with money cards to take on their turn.

Although Alhambra is more thematic than Qwirkle, it shares many of the same techniques.

So, if you’re seeking games like Qwirkle but want a more powerful theme, Alhambra may be the game for you.

The board game Hey, That’s My Fish is a good choice if you and your family are invested in trying out new games like Qwirkle.

Although it is aimed at those eight and over, younger players can still have a good time if an adult supervises them.

Players navigate their penguins around the board using hexagonal tiles that depict ice.

A hex is collected from the tile they land on, and they move to a nearby tile to collect the fish.

To avoid being blocked and thus eliminated from the game, participants must oversee their tiles as they begin to fade.

Players are removed one at a time until only one remain.

If you’re looking for a quick and easy abstract strategy game for kids ages 8 and up, this is it.

There are a variety of special blocks in Q-bitz, and each player has their own board and a collection of them.

A card is drawn in the first round whose pattern can be replicated using each player’s blocks.

To win the card, players must race to put together the pattern in the quickest time possible.

Three rounds are played in each round.

During the second and third rounds, the rules change so that players have to memorize the pattern and then create it using their blocks as dice.

During the three rounds, the person with the most cards wins at the end of the game.

It’s just like playing Qwirkle, where you have to come up with the proper combination from various angles.

A clever aspect of the game is that the shape of numbers matters.

Cards and tiles numbered 0-9 are used in the game. In each number tile, squares are arranged in a particular way.

To begin, draw a card and expose it. A number tile that matches the card is then placed on the table by players.

It goes on like this, adding new titles to the ones they already have in play.

Then, on one side of a square, the new tile must contact at least one tile on the same level.

And it’s done in 3D, too. Games for one to four players take about 20 minutes to complete.

You may want to give Hive a try if you enjoy tile-laying games like Qwirkle.

John Yianni came up with this basic but rewarding game for two players.

Hive aims to encircle your opponent’s “queen bee” with your own bees.

The hexagonal tiles feature bees as their primary design element.

Each player places a bee tile in turn, while the queen bee is placed at any time between turns 1 and 4.

Instead of playing a new tile after installing the queen bee, players might relocate an existing tile.

You can play Hive like Qwirkle since each tile moves distinctly, making it a simple but very strategic game.

Qwixx is a suitable recreation if you’re tired of the norm and want to try out other games like Qwirkle.

For example, it takes less than 15 minutes to play Steffen Benndorf’s Qwixx with 2-5 players.

Qwixx’s rules are pretty similar to those of Yahtzee.

Dice are rolled, and the sum of the numbers is used to mark out a player’s scoresheet.

On the other hand, the dice are a different shade of gray.

So, if a player has two white dice and two colored dice of the same color, they can mark that number.

Qwixx is a chance game ideal for families or casual gamers searching for games like Qwirkle.

It doesn’t matter if you’re not tired of playing Qwirkle.

But, if you still want to try out a different game with the same theme, this guide is for you.

We’ve outlined 12 other games like Qwirkle to pick your interest. You can try anyone or more than one.