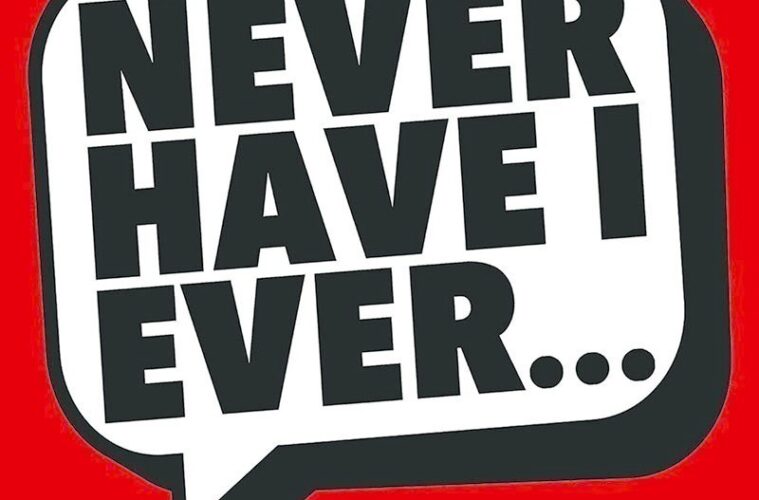 Great entertaining games like Never Have I Ever have been around for generations for a reason: They’re fun, raucous, and effective in breaking the ice and getting a party started.

However, one of the most annoying aspects of playing this game is coming up with experiences off the top of your mind, especially after a few games.

That is why the tangible edition of Never Have I Ever, which includes cards with absurd and amusing scenarios, has revolutionized the party game.

However, if you’ve exhausted all of the game’s scenarios or are simply looking for more games like Never Have I Ever to spice things up, keep you smiling, and have fun with your pals, you’ve come to the perfect place.

Like Never Have I Ever, these other games are sure to keep you entertained, and your parties are brimming with laughter and comedy.

This is an excellent party game that advertises that there are no winners – only losers.

Whatever the case, you’re sure to have a blast playing this outrageous game!

First, one of the participants takes turns acting as a judge.

Then, the remaining players draw a card with a stupid action, which is read aloud.

The judge then determines which player is most likely to carry out the action and awards the card to that player.

Drunk Stoned or Stupid is similar to Never Have I Ever but takes a more “I have done this” approach.

Nonetheless, it is ideal for fans of Never Have I Ever.

Card against Humanity is one crucial pastime on the list of party games like Never Have I Ever would be complete without mentioning Cards Against Humanity, the mother of all bawdy adult card games.

However, if you’ve never played this colossal game or it’s been a while, here’s a quick refresher.

Each turn, a different “card czar” is appointed.

Two decks of cards are utilized in this game.

The first is a white deck of cards that each participant receives in a single hand.

These cards contain different words and phrases to complete the sentences on the black deck of cards.

When each turn begins, the card czar will draw a card from the black deck, and the remaining players will attempt to complete the phrase using only the cards in their deck.

The czar then determines which card is the most significant, and whoever has the most relevant card wins the round.

The game is won by the person who wins the most matches.

In conclusion, if you’re searching for a wild party game like Never Have I Ever, then this is the game for you.

How about What Do You Meme?, a game that’s sure to have everyone laughing and having a good time? As a fun alternative to Never Have I Ever, you’ll have to match memes with the appropriate captions to have the best time.

With its easy-to-learn rules and rapid learning curve, this is the perfect party game for those with a few drinks.

Cards Against Humanity-style game, but instead of filling in sentences, you’re filling in memes.

There are usually amusing outcomes as a result.

What Do You Meme? is an excellent game to play with friends, primarily if you’ve grown tired of Never Have I Ever but still want something in the original vein.

Are you hoping to try out new games like Never Have I Ever? Well, Monikers is the right choice.

The moniker is a public domain game transformed into a deck-building card game to keep you from running out of creative ideas.

If you’re looking for a fun and involved way to spend time with your pals, this is the game for you.

Assuming you don’t already know how the game works, players are divided into teams.

Then, at the beginning of each turn, one player will draw a card with a celebrity’s name.

The user is tasked with providing hints or acting out the identity of this individual without mentioning their name.

Participants aren’t permitted to give any verbal clues in the final round and only communicate the celebrity by gestures.

Nevertheless, this is a fun twist on the classic game.

After the game, whoever has collected the most celebrities wins!

Funemployed is a great one to play for those looking for games like Never Have I Ever.

It allows you to spend an evening out with friends pretending that you’re applying for employment.

It is a game where players apply for professions that appear to be ordinary, but they tend to have ludicrous talents, and they must demonstrate these “strengths” in their interviews.

Are you looking for a position as an attorney?

If you can speak pandas fluently, you’ll be a better candidate than everyone else.

Funemployed is a terrific way to get your creative juices flowing and to get to know your friends better.

For people who enjoy games like Never Have I Ever, it’s a terrific option to check it out as well.

Red Flags is a terrific card game that will help you reclaim some of the things you lost in a Never Have I Ever game, such as a horrible date.

There will be a lot of laughs in Red Flags, which is described as “the game of horrible dates.”

It’s up to an alternating “Single” (who only acts as a judge) to cobble together a genuinely horrible date for their single pal on each turn.

The Single chooses the worst date of the bunch, and the player with the most dates selected wins the game.

This recreation is pretty entertaining, and it lets you abuse your buddies while having a good time.

If you’re seeking games similar to Never Have I Ever, Exploding Kittens is an excellent choice.

This game is wildly popular and a riotously entertaining party game that is sure to provide a good time for those searching for something different from Never Have I Ever.

Russian Roulette is the inspiration behind Exploding Kittens.

Each participant receives a deck of cards and takes turns drawing one.

The player that draws a kitten card “explodes” from the game.

Additionally, innumerable other cards grant you immunity or different abilities, which adds to the game’s intrigue.

Though it is conceptually distinct from Never, Have I Ever! Exploding Kittens is a beautiful game for fans of the title above and is sure to entertain everyone who plays.

Suppose you enjoy entertainment that comes with games like Never Have I Ever but wish they allowed you to showcase your drawing abilities.

In that case, you’re sure to enjoy Drawing Without Dignity.

This game is highly similar to Pictionary.

However, the subjects you are required to draw are obscene, filthy, and unsuitable for children!

In essence, there are two teams, and each turn, one player from each side must attempt to pull what has been drawn from a deck of cards within a time restriction.

The teammates are then required to guess which card has been removed.

The game can become quite boisterous, exciting, and even embarrassing at times — whether due to the material or your lack of sketching ability!

But, like Never Have I Ever, Drawing Without Dignity is ideal for a beautiful party.

These Cards Will Get You Drunk

Are you a fan of how Never Have I Ever drinking game?

This game is essential (as it should be as more alcohol is consumed) yet fun.

Essentially, you’re dealt a deck of cards, each of which contains unique actions or difficulties.

And each of these tasks or challenges is an excellent approach to induce intoxication.

If you enjoy drinking games and social interaction with your pals, These Cards Will Get You Drunk is the perfect game for you.

Therefore, if you’re seeking fun drinking games like Never Have I Ever, this one is not to be missed.

Lastly, on our list of games like Never Have I Ever is Charty Party, the ideal party game for chart and graph aficionados!

Does this seem a little nerdy to you? Leave not yet!

This game is delightful and amusing, and it is sure to entertain you just as much as Never Have I Ever does.

The game is described as an “adult card game of hilariously humorous charts, graphs, and data visualization,” It is pretty easy to learn.

Essentially, there is a deck of “chart” cards that contain unlabeled charts and graphs and another deck of “y-axis” cards that players can use to name the graph.

The participant gets a hand of y-axis cards, and on each turn, an alternate judge draws a chart. Players must choose the best y-axis label for the chart from their hand.

There will be hilarity.

Therefore, if you’re seeking the perfect game to conclude this list of Never Have I Ever alternatives, you cannot go wrong with Charty Party!

If you’ve played Never Have I Ever several times and want to try something new, then we’ve got you covered.

There are many games like never have I ever available in the market to choose from for your next game night or get-together.

You’ll never get bored with our list of best games like Never Have I Ever. You can try more than one.

The most important thing here is having fun while doing it.