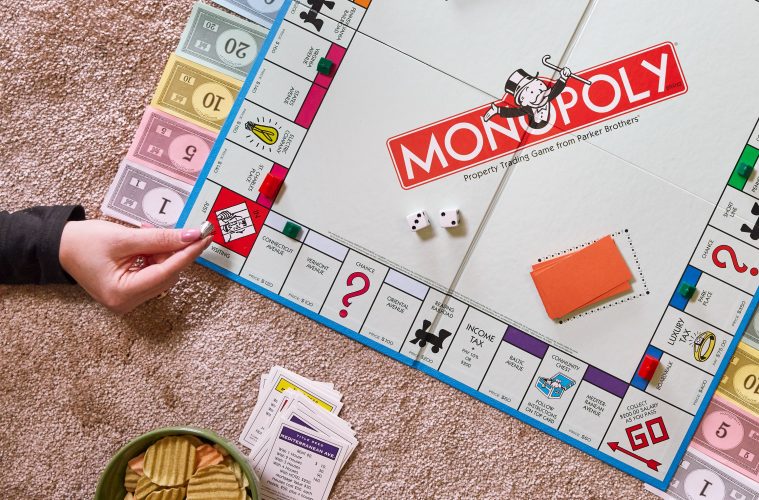 An undeniable fact is that Monopoly is one of the most well-known games available on the market. The game is known for its economic concept — monopoly, which means the ability to dominate the market.

The absolute capitalism portrayed in this game can build or destroy friendships and, at the same time, teach kids the value of money and impart some vital knowledge of finance.

So if you’re a huge monopoly lover and are interested in games similar to Monopoly, these top ten board games will definitely make your game nights a highlight!

Catan is a popularly known multiplayer game like Monopoly. The game’s concept involves players taking on the role of settlers on an island, each trying to build and develop possessions while trading and acquiring resources.

The island is represented with the game board consisting of hexes of different land types, randomly placed at each game’s beginning. Three–four players begin on the modular island of Catan, which consists of 19 hexes.

There are five different land types, and a number between 2–12 is placed on each tile. The players start with a settlement at the point where three hexes meet. On each turn, the player rolls two D6 dice.

Any player having a settlement flanking a hex matching the rolled dice gets a corresponding resource card.

Each player spends specific resources on their turn to build settlements, roads and upgrade their settlements into cities. Players can trade resource cards with each other.

The aim of the game is to be the 1st to reach ten points.  Each settlement is worth one point, and the cities, two points. The first player to gain 10-points wins the game.

There are different game variations, which means the more you play and adapt, the better and better it gets.

The Game of Life

Another classic family board game, The Game of Life is an excellent choice for anyone searching for games similar to Monopoly.

The game simulates a person’s life path, from college to retirement, with jobs, marriage, and possible children on the way.

Children from ages eight and above can play this game. It’s not quite as brutal and capitalistic yet teaches how to manage currency, navigate life’s curves, and overcome difficulties as you go through life!

Two, four, or six people can play it. With each round, you get to different milestones in “life” and getting married, having children, paying taxes, paying bills, and others.

Just like Monopoly, you can land on positive or negative things. The player having the highest amount at the end of the game wins.

However, unlike Monopoly, the game doesn’t end until you get to the board’s end and not when all other players, except the winner, fall into financial ruin.

The Game of Life is an entertaining and dynamic family board game with similar Monopoly concepts. It can also be perfectly integrated into your repertoire.

If you’re looking for games like Monopoly because you enjoy the idea of developing a world and progressing based on the cards given to you, then Carcassonne is for you.

Named after the medieval walled city in southern France, the game’s concept is quite simple, fun and can be played by 2-5 players.

Basically, you make use of the cards you’re dealt to build roads and cities and towns. The game board has a medieval landscape on which the players develop their towns or cities.

You earn points according to the completed cities, roads, and others. Although there are no dice to roll here, the act of building in every turn will surely delight the most avid monopoly fans.

So if you need a fun game, you should definitely get yourself a copy of Carcassonne.

If you want another board game with a concept similar to Monopoly and following the Carcassonne theme, Railroad Ink is perfect for you.

Railroad Ink is an abstract roll-and-write puzzle game where players are to place randomly generated game pieces on their boards to try and build the best arrangement of points. Each player starts with an empty dry erase game board (a 7×7 grid) and a pen.

The player who gets the highest score made the best of what was thrown at him.

Based on building themes like Monopoly, this is an ideal game if you prefer to finish a game in a few minutes instead of hours.

Railroad Ink is perfectly suited for children from eight years of age and has room for two–eight players. This makes it the perfect addition to game nights with the family.

Power Grid is a multiplayer board game with a similar concept to Monopoly. Every player symbolizes a company. The company has power plants, in which it tries to supply cities with electricity.

As the game progresses, players bid on power plants and purchase power generation resources to supply electricity to the growing number of cities in their expanding grid.

This game lasts about two hours and is lots of fun — it can be played by two to six players.

The game comes with a map of the USA and Germany.  Each map consists of six regions, on which cities with different costly connections are listed. The number of areas used depends on the number of players.

There are five rounds in the game where the players face different obstacles. This allows them to experience the harsh reality of life, similar to the monopoly game.

The game ends after a player has built a specified number of cities. The player who can supply electricity to most cities with his grid is the winner of the game. If a tie occurs, the participant that earns the most money or cities wins.

Unlike other games, this game’s resources are in a market whose price rises as demand changes.

This game requires time and patience and can be played by children from ages 12 and up.

Risk is a calculated board game of statecraft, conflict, and conquering for 2-6 players.

This game is played on a board that represents a political world map divided into forty-two areas grouped into six continents.

The game rotates among the players who control armies of tokens with which they attempt to conquer areas from other players, the results being determined by dice rolls.

The players can form and dissolve alliances while the game is being played. The game’s objective is to occupy all the territory on the board, eliminating the other players.

Players will be dealt with different attack and action cards all through the game’s duration.  The game can be lengthy, lasting from several hours to several days depending on the number of players you have and also whether you include any of the standard house rules

Even if they don’t have the same name, several people who enjoy Monopoly also like to play Risk.

If you love the business and real estate development aspect of Monopoly, then you’ll certainly love Suburbia.

This game is a relatively new addition to the board game universe released in 2012 — it’s perfect for Monopoly fans looking for something different.

This is ideal for families as it can be suitable for kids from ages eight and above. It can be played by one–four players and lasts about 90 minutes.

The main goal of the game is to build your municipality efficiently. In each turn, you buy a tile in the real estate market and place it anywhere in your district.

These can be beneficial financially, or highs or lows in popularity.

The things you purchase are as important as the place you set them because each tile can affect many others in the game and possibly create some powerful combos.

As you build your district, you will gain both income and reputation. These will help you with more money to buy future tiles or more people for your community.

Also, note that as your district grows, so does the cost of maintaining it. If you expand too quickly, you will have trouble keeping up with the new demand.

Depending on their position in your neighborhood, you can earn some money you’re your building, meaning they can be very lucrative.

There is also a set collection. Each player gets a secret method for scoring. For example, collect green tiles. If the other player gets to know what you’re collecting, they’ll try to stop you by buying it.

The game ends in a random way as players approach the end of the third stack of building tiles.

At this stage, players receive bonuses for every goal achieved, and the player having the highest population wins the game.

Lords of Vegas is a game similar to Monopoly, although the players have to develop the thriving Las Vegas, Nevada.

The object of the title is to construct the best and biggest casinos to earn more points.

Similar to Monopoly, players start the game with a specific amount of money. On each round, you take a card that determines which plot on the Strip you take possession of.

At the end of the game, the one who has the most “victory points” and has built the most casinos wins, similar to Monopoly.

This game is excellent for players 12 years and older. It can be played by 2-6 players and is perfect for families and groups of friends. The game lasts about one and a half hours, so it’s not quite as long as Monopoly, but it’s still a great game to spend an evening.

It is time to get a ticket. If you dream of buying all the railroads in Monopoly, you will enjoy this adventure game on the rails.

Ticket to Ride is a board game featuring a railway theme. It’s played on a board with a railroad map of the different countries.

All you need to do is to claim railroad tracks and move across the country before anyone else. Sounds easy. But if you make the wrong move, you’ll be going around in circles. Make the right connections from town to town, and you win the game.

Player receives points based on the stretch of the routes claimed, on the person who travels the longest continuous railroad line, and whether the player can connect distant cities determined by drawing railcar maps.

In the beginning, players receive four train car cards as a game hand. They also receive three Destination Coach Cards, each showing a city pair on the United States and Southern Canada map. These become Destinations, representing two endpoints that the players try to connect secretly.

This is a perfect game for those interested in games like Monopoly, and it’s suitable for kids from ages 6.

Acquire is another multiplayer game like Monopoly about mergers and acquisitions. It’s played using tiles to represent hotels arranged on the board, play money, and share certificates.

The game’s goal is to make the most money by building and merging hotel chains.

When a larger chain buys up a chain in which a player owns shares, depending on the chain’s size, players can earn money. At the end of the game, all players liquidate their shares to determine which player has the greatest wealth.

As the companies grow with tiles’ placement, they also begin to merge, giving the majority shareholders of the acquired company substantial bonuses that can be used for reinvestment in other chains.

All investors in the acquired company can then redeem their shares at current value or exchange them 2:1 for shares in the newer, larger company.

Two – six people can play it; games last about 90 minutes. This game can be included in your family game night for a fun and entertaining night.

There are many board games like Monopoly that will interest many Monopoly lovers. Whether you love the game for its real estate or complexity in nature, you are sure to find something worthy in these ten games.