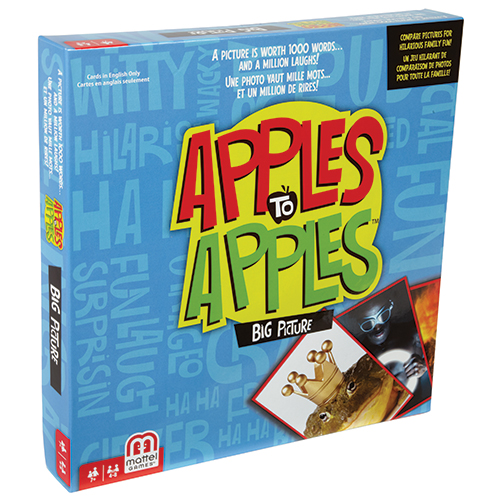 Apples to Apples is a well-known family and party card game available in the market. The game is fun and interactive for all ages. In this game, the judge reveals a statement card, and the remaining players have to present an action card that they think best matches it.

The judge chooses the one they think is best, and whomever they choose gets the point for that round.

Finding a game like Apples to Apples can be a bit challenging. However, there are lots of similar games out there that you can enjoy.

So to help with deciding the best games, we’ve listed ten games like Apples to Apple that can spice up your gaming nights or family gathering.

In need of a game similar to Apples to Apples? Then, Dixit is the perfect choice. The game uses a deck of cards elucidated with dreamlike pictures. Each player chooses cards that correspond with the title insinuated by the “storyteller” and try to guess which card the “storyteller” has chosen.

The game begins with each player begins being dealt with six random cards. Players then take turns as storytellers. On each turn, a player selects a looks at the six pictures in his/her hand and comes up with a phrase best describing the card.

The players vote to find out what the original card was. At the end of the game, the player with the most points wins.

Dixit is suitable for all ages, and it’s a perfect game to add to your game collection. Three–six players can play it.

Exploding Kittens is a popularly known fun and entertaining game like Apples to Apples. It’s portrayed as a “tactical card game on cats and explosion.”

This game can be played by two–five players and suitable for ages seven and above. All cards are placed in a deck except for the Defuse and Exploding Kitten cards and shuffled.

Each player picks seven cards and one Defuse card. Then the “Exploding Kitten” cards are reshuffled back into the deck. This ensures that the number of that cards in the deck is lesser than the number of participants.

The remaining Defuse cards are also placed back into the pile. The players decide on turn order. The game is easy to learn and incredibly fun to play.

It is essentially based on Russian Roulette and requires players to draw continuously from the deck of cards until they unavoidably, pull a “kitten” and “explode card.” Also, lots of other cards are included in the game to make it more entertaining and give you immunity.

Snake Oil is a relatively fun game like Apples to Apples. In this game, the players use their quick thinking and persuasive personality to play the game.

One player acts as the “customer”, while the remaining players are the “salesmen” who try to convince the customer to buy their product before the others.

The products for sale are made by combining two of the word cards, and the players must tailor their sales pitch to the character of the customer.

Selling a caveman a snow machine would be very different than selling it to a rock star! Make up any ridiculous stories to gain the most customer cards. After each player has acted as a customer, the player having the highest customer cards wins the game!

This is a great family game title that provides a blend of communication elements we don’t see too often. It can be played by three–ten players, the games last 20–30 minutes.

This game is only for mature players, as the cards are labeled with really offensive things.

If you’re over sixteen or seventeen years old and think that Apples to Apples is a bit too tame for you, then you should definitely play Cards Against Humanity.

Each player picks ten white cards to begin the game. The first player is the card Czar, who reads out the fill-in-the-blank phrase or question on the black card. The remaining players fill in the missing blanks or answers the question by passing one white card to the card czar.

The rules in this game are adaptable and can be modified by the many house rules (listed in the rules) that players can integrate.

You are guaranteed to laugh out loud and feel incredibly uncomfortable. And Cards Against Humanity is the perfect game if you’re looking for more party games for adults like Apples to Apples.

Scattergories is another word game like Apples to Apples This game is fun, easy, and can be incorporated into your family game night!

The goal of this game is to attain points by distinctively naming objects within a series of categories given an initial letter within a time limit. The title can be played by two–six players and ages 12 and above

The game theory is quite simple. All the players are provided with category cards and a pad of paper. When each turn starts, a 20-sided die is rolled, and each side of the die is described with a letter.

During the three minutes, each player has to write a word that fits into the 12 categories, starting with the letter on which the dice landed. At the end of the round, whoever manages to do it first or has the most words, wins that round. The game’s winner is the player having the highest points at the end of the game!

Scattergories is an entertaining and fast-paced game with a similar concept to Apples to Apples.

What Do You Meme is just like Cards Against Humanity but with images and a bit more Millennial anxiety?

Every round, one player serves as the judge and plays a photo card; then, all the others play a caption card that can complete the meme. The judge chooses the funniest pairing, and whoever played that caption card wins the round. The game continues with another player acting as the judge.

Only players above 17 years can play this game. It can take three–twenty players, and play lasts about 30–90 minutes.

Bubble Talk is another game similar to Apples to Apples. This time funny captions are combined with pictures. To begin the game, each player receives seven caption cards. Then the player acting as the judge for the round draws a picture card.

Now the other players select a card from their hand, which best fits the picture in their opinion. The player who entertains the judge the most by making him/her laugh wins the round.

Each round delivers funny, clever, and creative outcomes to keep all the participants hooting. In each game, there are 150 picture cards and 300 funny label cards for hours of fun.

This game doesn’t require storytelling, and players don’t have to answer any uncomfortable questions. Three–eight people can play this fast-paced family game. Bubble Talk is a game that’s suitable for both kids and adults.

This title is just like Apples to Apples. However, instead of matching nouns or adjectives in the latter, players submit slogans for a T-shirt picture. Three–six players can play the game. Also, it’s best to agree on the winning score from the beginning.

The objective of the game is to be the 1st player to collect 3000 points in Hot or Not Cards. In each round, Hot or Not Cards are given to the player whose Slogan Card best matches the T-Shirt Card.

Just like Apples to Apples, the players are appointed as judges in turn. The judges give each player 3 Slogan Cards. The judge puts 1 T-Shirt Card on the table face up. Each player selects the craziest card from their hand, which they think best matches the T-Shirt Card.

The winner of the round picks out a card from the Hot or Not Deck. That player reads out the card, informing the remaining players about the thoughts of the world with regards to the winning shirt and the number of points it is worth.

After each player has played a slogan card, the judge shuffles them on the table so that he does not know who played which card. Then the judge turns over the slogan cards one by one, reads them aloud, and sets them beside the T-shirt card facing up.

Once every slogan has been presented, the judge chooses the slogan card that makes the funniest or craziest T-shirt! The decision is entirely at the judge’s discretion!

It’s a fun game that can cause lots of laughter. Essentially, each player has to design their shirts by combining silly slogans with funny pictures.

The T-Shirt Game is a fun game that can be played by kids from 14 and up. If you’re a die-hard Apples to Apples fan, this is the ideal game for you.

In this game, a player asks a question and every other player writes an answer they think the questioner will likely choose. Then, the players place a bet on which answer was chosen by the questioner.

Up to six people can play Say Anything Family. You can also separate the players into teams. The average playing time is about 30 minutes, which is excellent for those who like fast games.

Although this game is a little complex than Apples to Apples, you can still gain points for answering correctly and also for placing a bet on the right answer.

You can get continuous entertainment with this game. Though the questions always remain the same, you have the opportunity to give a new answer in each new game.

For the family variant of Say Anything, it is a perfect choice when you want to spend time with your loved ones, particularly those you don’t spend much time with, as you can learn more about them. This game encourages players to talk about themselves or tell a story.

Sushi Go! Is another cool game similar to Apples to Apples, but instead of words, this game uses pictures. The game is fun, easy-to-learn, and very fast to play, making it an ideal option for anybody in the market for a game that’s fast and easy to play.

Each player begins the game with a deck of cards where different types of sushi are drawn. Each sushi dish is assigned its point score, and the game’s goal is to put together as many sets of the similar sushi dish as possible to achieve the maximum score.

It’s an excellent game to add to your card and party games like Apples to Apples. Both adults and children can play it. Different variants of this game are available, which can be incorporated into your game night.

Finding games like Apples to Apples isn’t difficult, as there are many great games available in the market. Whether you’re searching for fun games like family-friendly games or game night with your friends or your kid, we’ve made the decision easy for you with the ten games listed above.

The games will definitely keep you occupied, brighten up your days with their hilarious concept and the players participating in the activity.