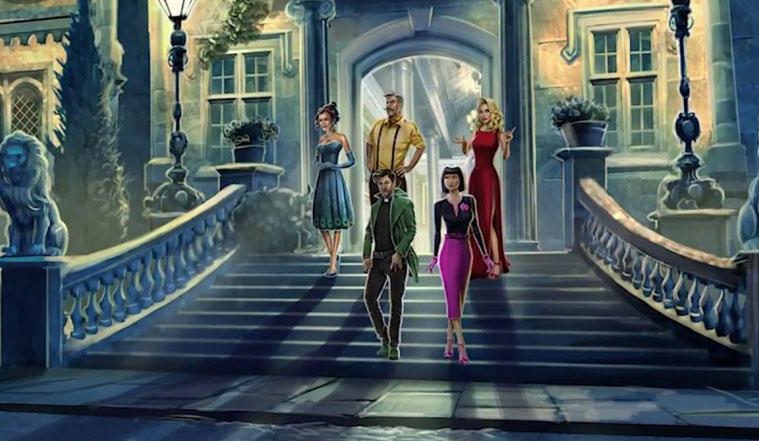 Over the past 15 years, the board game market has witnessed several games like Clue getting published in the mystery or murder segment.

Keep reading if you’re looking for similar games to Clue. Originally called Cluedo, Clue is a classic title from 1949 and a popular option in the board game genre.

It’s a murder mystery game for 3 – 6 players devised by Anthony E. Pratt from England in 1943. Clue was first manufactured in 1949 by Waddingtons in the UK.

Since then, the game has been re-launched and redesigned many times. It’s currently owned and published Hasbro. Away from the brief history class on Clue: here are 10 great alternatives to Clue:

Mr. Jack’s premise has to do with solving the Jack the Ripper murders in nineteenth-century London. The mystery game can only take two players, making it an ideal option to play when you’ve got a fewer number of people than required for Clue.

In the title, one of the two players will represent Jack the Ripper — one of the eight characters featured on the board. This player, armed with the knowledge of what character Mr. Jack is, aims to flee from the district as fast as he/she can (or prevent getting accused for eight turns).

The opposing player will represent an independent investigator and will not be represented on the game board. He will try to guess Jack’s identity but is only allowed to make one accusation during the game!

This way, the investigator can know which characters aren’t guilty. As the turns proceed, the investigator will strive to get rid of suspects as Jack tries to avoid getting accused. Each player needs a good dose of intuition, logic, and cold blood to excel in this game.

If you’re gung-ho about playing an exciting mystery board game like Clue to make your family game nights more fascinating, simply grab a copy of Mr. Jack!

Mysterium is a cooperative board game, which was designed by Oleg Sidorenko and Oleksandr Nevskiy. Mysterium integrates elements of murder mystery games with those of guessing games (the card-based type).

One of the players will assume the character of the ghost of a murdered individual who can communicate only through a series of visions with the other players. These vision come in the form of illustrated cards.

The other players serve as the psychic mediums and have to interpret these cards to know a suspect, location & murder weapon. This board game is set in the 1920s, and it focuses more on cooperation rather than competition. This makes it appropriate for kids.

However, it may be too spooky and complex for children below 10 years of age. Mysterium can accommodate two – seven players, aged 10 and above and has a minimum playing time of 45 minutes.

Scotland Yard was first published in 1983 and got its name from “Scotland Yard”, which is the headquarters of London’s Metropolitan Police Service in real-life. It’s a board game where a team of players, who are controlling various detectives, cooperate intending to track down a player that’s controlling a criminal as they go round a board, which stands for the streets of London.

This title is an asymmetric board game, where the detective players will collaboratively solve a variation on the pursuit-evasion problem. Ravensburger currently publishes the game in almost all parts of Europe and Canada. In the US, it’s published by Milton Bradley.

In 1983 (the same year of its publishing), Scotland Yard won the Spiel des Jahres (Game of the Year) award. It accommodates around three – six players. The mystery board game takes almost one hour to complete, depending on the number of players.

This game’s premise is similar to the card game Mafia but comes with a smartphone app that serves as a guide to players. It’s a fast-paced game that takes three – ten players.

In the game, every participant gets a role: One of the fierce-looking Werewolves, the helpful Seer, the tricky Troublemaker, or one of twelve different characters, each having a special ability and unique powers.

Within a single morning, your village will determine who is a werewolf since all that’s needed is to lynch a werewolf to become the winner. As this title is a fast-paced and engaging game, you’d love to play it repeatedly, and each game is unique.

Spyfall makes today’s the list of games like Clue because it takes the same kind of game and changes you into a spy rather than a guest at a noir-like party. It’s a party game unlike any other, where you become a spy and try to understand what’s happening around you.

Spyfall has a straightforward premise. The game is played over many rounds.

At the beginning of each round, all of the players will be given cards that show the same location (which could be a traveling circus, a casino, a pirate ship, or a space station). The only exception is the one player that gets a card that reads “Spy” instead of the location.

Then, players will start asking each other questions such as “When was the last time we had a payday?” or “Why are you dressed so strangely?” or any other question you can come up with. Players ask each other these questions in a bid to guess who among them is the spy.

The spy doesn’t have an idea about where he’s, so he must listen with rapt attention. When it’s his time to give an answer, he must come up with a good story! After some rounds of guessing, suspicion, and bluffing, the game comes to an end. Whichever player that gets the maximum number of points wins!

Spyfall is more of a party communication & deduction game, rather than a move & remember game. It’s ideal for three – eight players, and games can last around 15 minutes.

Mystery of the Abbey

This title was an easy choice for this list of games similar to Clue since it has mainly all the same things except that in Mystery of the Abbey, a monk has been murdered in a holy place and you’re tasked with figuring it out. The two titles are more or less deduction games.

In Mystery of the Abbey, monks are of three orders. They’re fat-thin, bald-hatted, and bearded-clean shaven. A monk card is hidden, while the remaining cards are shared to players.

Turns in this game involve moving up to two spaces, after which you’ll ask a question of any other monks present there in a “Guess Who” style. Players could either answer truthfully or take a “vow of silence”. Then, in turn, the players have to ask the accuser a question.

Mystery of the Abbey accommodates three – six players, and games can last 60 – 90 minutes.

Betrayal at House on the Hill

If you’re a fan of Clue but are searching for something slightly creepier and more complicated, then you can never go wrong with Betrayal at House on the Hill.

The game has a very much similar premise to Clue. But it’s definitely more suitable for older players.

In Betrayal at House on the Hill, the general concept is that players are in a haunted mansion. With each turn, they explore more rooms of the creepy house where they find themselves. Some abilities and powers may manifest themselves based on the cards they have drawn or the room they’ve explored.

Eventually, they’ll get to a point where a traitor reveals himself or herself and, several times, you won’t know this until it’s too late!

The traitor doesn’t know that they’re the traitor. This is what makes the game fun and different than others of the same type. Betrayal at House on the Hill is probably the most complex game on today’s list of games like Clue.

But it’s still an amusing, engaging, dynamic title which will definitely entertain anyone seeking to try their hands at playing. It takes up to six players and lasts about one hour to complete a game. Betrayal at House on the Hill is a cool game for adults or more mature audience.

Stop Thief! was released in 1979. It’s an electronic board game that originated in the US and was published by Parker Brothers.

Restoration Games announced in 2016 that they were re-introducing a restored variant of the game with the aid of a free smartphone companion app, instead of the electronic device. In 2017, they funded a Kickstarter campaign for Stop Thief! successfully.

This game makes this list because it’s mainly what Clue is if it launched in the 21st century. 70 years has provided us with several advances, and you see that clearly in Stop Thief! here with a technological focus.

In this game, an invisible suspect commits a crime, and the only thing that gives them away is the sounds they make. You must listen to the clues and determine their hideout.

You’ll play cards from your unique deck to go round the board, move stealthily through a window, or undergo a private tip. When you’ve got the suspect pinned down, make the arrest immediately!

The game board features four buildings, in addition to the type of establishment it’s and a number (Furs for 1, Jewelry for 2, Antiques for 3, Bank for 4). There are also four streets on the board between and around the buildings with the numbers — 5, 6, 7, and 8.

You’ll find two-digit numbers inside each building on alternate squares. The numbers show where the thief is allowed to end his movement, and four or five of them are in red to indicate a potential crime scene.

Stop Thief! is suitable for two – four players, and it can take about 30 – 60 minutes to complete games.

Letters from Whitechapel is another game set around the Jack the Ripper murders. It can take two – six players and requires one hour to complete.

Letters from Whitechapel is a fascinating mystery “whodunnit” game, which will definitely delight older fans of Clue. Its premise is simple: A player represents Jack the Ripper, and he aims to capture and murder five of the other characters without getting caught.

If he achieves his goal, then he becomes the winner of the game. The other characters that vary in identity will aim to catch Jack the Ripper before he can murder any character.

This title is appropriate for players aged 14 and above.

If you’re a fan of Clue but would prefer the setting to be in a more “realistic” crime-solving manner instead of a fancy party or a creepy mansion, then you can give Police Precinct a try.

It’s a collaborative mystery game with a generally simple premise (like most of the other options above). A murder has just been committed, and the players (who are characters in a police precinct) are trying to investigate it.

Everyone has a different identity. To make things slightly more complicated, one of the players (the characters) will have a corrupt personality and could give misleading information on the murder in a bid to cover his tracks.

If you’re searching for games like Clue, the titles reviewed above are a perfect option for you. Apart from sharing various similarities with Cluedo, they also add some twists and turns to provide you with a thrilling gaming experience with friends and family!