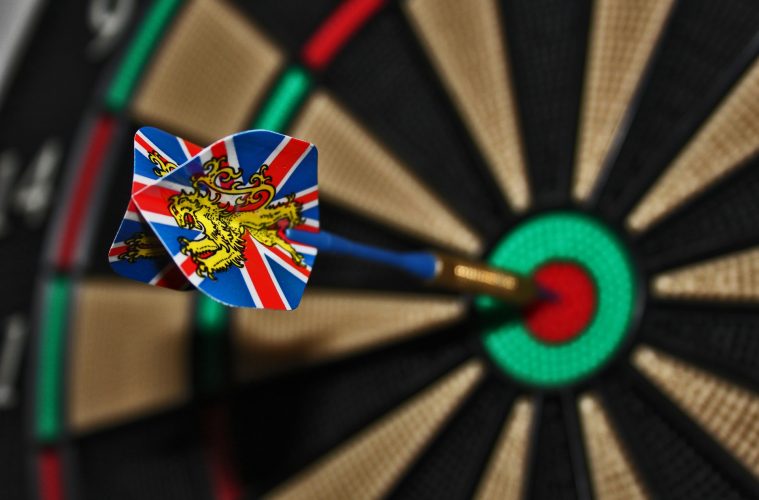 How to Become Good at Darts – Life Changing Tips in 2020

Darts keep getting more popular as each day goes by. While you and your family may be playing this board game for fun and entertainment, many others take it as an art to develop, challenge, and display their creative skills.

The game, which was invented by Brain Gamlin in the 19th century, isn‘t merely meant for a group of drinking people in a pub or bar as professional dart players take it as a serious, mentally tasking game.

At the moment, the stats say we’ve about 10 million persons, who play this game competitively. And this figure excludes the casual players.

If you’re seeking to improve your darts accuracy and precision, in this guide, we’ll explain some methods you can use to take your game to the next level.

10 Tips to Become Good at Darts

Practice with a Set Goal

To elevate your dart-playing skills, you mainly need to do this: Lots of practice. Consider executing all training with a purpose.

If you merely throw countless darts at a board without any set goal, you’ll end up wasting waste your time and energy. There are many strategies for practice, which you can tailor to your purpose systematically and purposefully.

You can make a conscious effort to gradually raise your accuracy by systematically aiming at one of the highest scores in the game.

With this, you can get a relative framework that can be used for measuring progress.

There are many variations of this technique around. Another practice method involves throwing doubles only or even numbers exclusively.

If necessary, you can place a limit on the number of darts you allow yourself to earn a specific score, particularly when practicing the most common checkouts.

To get more out of it, consider practicing for 30 minutes daily, for instance, instead of 5 hours on Sundays. When it comes to darts, the more you play, the easier you find it to retain all you’ve learned.

For example, I’ve noticed a drop in performance when I’m unable to practice for a little while due to one reason or another, and other players have also made the same observation.

I’d recommend that you do the majority of your training alone, at least more than two-thirds of it.

Solitary training is still preferable to practicing with other people, though you should also add training with others as part of your regiment.

The primary advantage of putting these self-imposed conditions or handicaps on your practice sessions is that it allows you to transform a mindless activity into a disciplined one.

That’s among the most efficient methods you can utilize to become a better player.

Use Technology as Practice Aid

We live in a modern age with so much technology around, so it’s now possible to practice more productively without a hassle.

Throwing darts without a set goal or purpose is counterproductive to improving as a player, as stated earlier. Thus, a key part of what makes practice effective is your ability to track your progress.

There are many digital tools online, which can make practice and scorekeeping quite straightforward. Using these products, you can keep score and also track your progress more efficiently.

To get started, we advise that you check out the following apps and pick the one that best appeals to you:

Using these apps, you can also become good at darts.

Be Aware of Your Entire Body and Hold Still

Players at all experience levels often make the mistake of losing awareness of their body while throwing a dart. To improve and do so consistently, ensure this doesn’t happen to you.

During every second of your throw, pay attention to the whole body. Do this from the moment you put a foot on the oche line till the moment the dart leaves your hand.

Also, make sure you avoid bouncing, swaying, or swinging the body at all costs. Your breathing has to remain steady and controlled always.

Apart from these, you need to ensure all motion is consciously performed.

Several players do throw their elbows out, lift their back leg, flex their knees. Also, some players close their eyes when they release the dart, much the same way they do while sneezing.

But all these behaviors do more harm than good in achieving accuracy and precision.

With more practice and experience, over time, you can gain more control over your entire body and focus on even the tiniest mechanical details of your throws more naturally. Obviously, this will improve your averages.

To a lot of individuals, this tip players can seem silly, and it could even appear counterintuitive to some.

But the fact remains: If you seek to become a better player of darts, you’ve to play with people that can defeat you, and this applies to all games or sports generally.

To improve, you must lose repeatedly as failure will make you get better.

We’ve 2 primary reasons explaining why this kind of failure works out in the end. The first one is that by playing with others that are better than you, you’ve an opportunity to study how they play.

Carefully observe the posture (the forearm, arm, wrist, breathing, eye contact, etc.) of a player, who is better than you mechanically and strategically, and learn from them.

Furthermore, when you experience failure, you’ve a chance to analyze those things you did wrong and work on them to advance your skills.

According to the physics & mechanics behind dart throws, one of the most vital areas to master is to ensure your body stays still while releasing the dart.

For this reason, ensure only the forearm, arm, and wrist move so that the dart can follow the most accurate and efficient path through the air.

Thus, if you want to take your throws to a higher level, you’ve to perfect your stance.

Make your stance both comfortable and relaxed, as this will enable you to launch several times without experiencing excessive fatigue.

In a proper dart stance, your shoulder must be still, and after you’ve aimed the dart, any other movements from the upper body will change your position and tamper with the planned trajectory.

We’ve a huge variety of acceptable stances. However, you can find the specific one that works best for you and stick to it.

In a proper stance, the player will face the dartboard, much the same way an archer does his target.

If you’re a beginner, the best thing is to take an angled position between your foot and the oche line to achieve the most accuracy and stability.

Furthermore, the majority of your body weight has to be placed on the front foot. But during a throw, ensure that your back foot doesn’t ever lose contact with the ground since this will lead to instability.

You need to master all this to become good at darts.

In an optimal dart throw, 3 stages can be identified: A, B, and C.

The first one involves the initial position in which the elbow is bent, with the forearm perpendicular to the upper arm. At this position, the dart has to be tipped upwards, ensuring that the point is a bit tilted.

In position B, there’s the drawback phase in which the forearm swings back, preparing for the throw. And the third position describes the extension of the arm as well as the eventual release of the dart.

What’s the secret to a perfect follow-through? This lies in the snap of your wrist at the end of the extension during the third position.

By snapping your wrist at the end of the throw, you can apply a boost of acceleration to the dart, offering it greater stability as it moves through the air.

Also, ensure the fingers are pointing down at the very end of the motion.

A perfect throw glides between the 3 positions mentioned above effortlessly and seamlessly.

Get Rid of Variables

This doesn’t mean that accuracy is trivial. It’s essential, no doubt. However, if you want to raise your game, consider working on consistency first and foremost.

You must get rid of as many variables as you possibly can to attain high levels of consistency, meaning your stance, grip, throw mechanics, follow throw, and others have to stay the same every time you play.

As soon as you’ve discovered the most suitable routine for you that goes along well with your style of play, strive to hone it as much as you can so it becomes your second nature.

This isn’t as easy as it seems as it’ll require hundreds — if not thousands of practice hours — before you can do it naturally.

While consistency needs considerable effort and commitment, a handful of aspects of your game can give a bigger boost to your performance.

Anyone that’s familiar with the world of darts will know we’ve different dart shaft lengths and flight designs.

To fine-tune your set-up for better performance, experiment with various flight combinations and shaft lengths.

Each of these factors will have an impact on your dart throw, and when considered as a whole, they can give a huge boost to the ability to achieve accuracy and consistency in your throws.

Similarly, your shaft length, or the dart’s body, can produce different degrees of stability and speed through the air.

Additionally, various combinations of both components can help you in pinpointing and cutting down on bounce-outs and off-target throws.

Fortunately, there are different online retailers and physical vendors, offering affordable flight and shaft combo packs for sale, allowing for this sort of expert experimentation.

When it comes to darts, practice doesn’t make perfect. It’s regular practice that helps you achieve this.

Even though you’re a talented player, without playing regularly, your game will rapidly drop.

If you’re only playing once per week, there won’t be much improvement in your game. By playing several times a week, you’ll be able to improve your accuracy significantly.

It doesn’t have to be a long-tournament kind of games; simply select a set of darts and then play an instant game of Chase The Dragon or Around The Clock.

Even an additional 20-minute practice session, 1 or 2 times a week, will go a long way to help raise your game. If you’re aiming to improve, you’d need to play more often.

Find a Strategy That Works

We’ve many dart games, and listing the strategies for all of them in this guide wouldn’t be possible.

For this reason, if you find that you’re lagging in a specific game, consider rethinking the way you’re approaching your style of play.

For the majority of the games, you shouldn’t have a tough time as the strategies are straightforward to understand and apply. At other times, you may not just be aware.

For instance, as a beginner darts player, you may not be familiar with “out charts”, and if you’ve to play against a pro player, your lack of knowledge of this concept will hamper your performance every time.

This is because you’ll be using the wrong strategy or approach.

What are out charts? These are tables of outs for 01 games telling players ways to hit a double out from as far as figure 170.

It’s a crucial skill all beginners have to master to become an expert in the game and compete with other pros at the highest levels of darts tournaments.

Also, it’ll provide a new perspective about your entire outlook on 01 games and 501 — the standard games that are played at darts tournaments.

Wrapping up, if you’ve been paying attention to all that’s said here, then the battle is half-won. Applying the tips above, you can become good at darts and devise cool strategies to defeat your opponents.

How to Play Baseball Darts

Tips on How to Become Good at Darts

How to Play around The Clock Darts Rules

How to Play Shanghai Darts