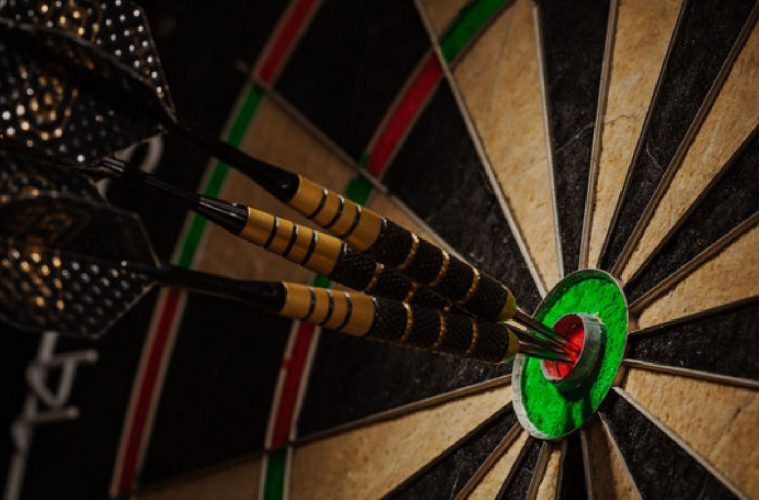 How to Play around The Clock Darts — Rules

Around the Clock or Around the World, also widely known as “Darts”, is named after the dartboard and the fact that the whole idea of the game is to go around the board in a clockwise manner.

You can play around the clock as a single player for the sake of practice and improve your accuracy.

It doesn’t matter if it’s your first time playing, and most often, it’s more fun when played with friends. Also, you can call as many participants as you want.

There’s really no rule as to how many you can play, and it isn’t difficult to keep track of the scoring. Everyone simply has to keep in mind what number they are currently on.

This dart game can be played really fast, especially when played by experienced players. Ten minutes is enough time for some players.

The player who can hit all the numbers from 1–20 in numerical order, including the bull’s eye, and is also the first to finish, is declared the winner.

There are so many versions of this game and rules that better suit certain occasions. Around the Clock happens to be one of the easiest and straightforward games in the world of darts.

Around The Clock Darts Rules & Instructions

The concept is quite straightforward because you simply go round the clock (or world), but it can get tricky in some cases.

Do not worry about tallying up points here. You should only try as much as possible to remember one number, and that’s the number you’re on.

Determining who plays first is essential in case there’s more than one player. This can be done by flipping a coin.

You may as well consider using the left-handed throw; that’s, each of the parties will throw a dart with the left hand.

The throw nearest to the bull’s eye gets to play first. The game is like a race, and the first thrower has an advantage over the other players.

However, there are some occasions the weakest player is given a chance to start first.

You get three darts each to play at every round; that’s just how it is in most of the dart games.

There’s a particular number that all players aim to hit that guarantees them 3 points.

Everyone tries to play while having their main target on the triple ring, which is also called treble.

If you hit on a single area, you’ll get one point, and it’s considered a bad throw if you hit a double. This will also earn you one point.

You shouldn’t throw the three darts in one number as in the state of other dart games, like cricket.

So, the first dart should be thrown at 1, the second at 2, and goes on in that order. When it’s your turn again at the board, you then throw into the next three numbers 4, 5, and 6.

Be that as it may, whether you hit a double, a single, or a treble, it’s all referred to as a hit. Then you can move on around the board and strike all the 20 numbers and lastly the bull’s eye.

So, now you can sum up the points that you have gathered so as to get the total.

You win by grabbing all the twenty numbers and then the bull’s eye.

Around The Clock Moves

It is very paramount to be as precise as possible when playing around the clock, even more, when compared with playing other games.

Intensifying the toughness even further is what they call Around the Clock “Shanghai”.

You can only move on to the next number after you hit the single, double, and triple.

The “single” is the smaller area of the segment. And the “double” is the area in red or green at the top of the number segment.

The triple, on the other hand, is the middle and smallest part of the segment in red or green.

This, thus, makes the game more interesting for the experts.

Moreover, this variation is for skilled players. As a beginner, you can increase your chances by using only doubles.

In all dart games, doubles are crucial. So this variation is a perfect way to enhance your mastery.

There‘s no way you and the other player will have the same potentials. There’s always an option of setting a handicap.

The best and easiest approach to exert a handicap to even up the odds of this game is to cut the scoring zone for the top player.

That’s, if they are really exceptional, permit them to hit only treble, and if they’re skilled, let them hit doubles and trebles. It’s no fun always winning the game with a huge margin.

Around The Clock Count

This is another variant of this game that makes it more intense.

Around the Clock Count enables you to decrease the number of turns, by restricting the game to a certain amount of turns, depending on the ability of the players.

You could limit the game to 20 turns, for instance. A winner can be declared in the following ways.

If a player hits from 1 to 20, including the bull’s eye in 20, or less turns, or the player who can progress the furthest is considered the winner. All other rules of standard cricket are applicable from here.

In case a player hits 20 and a bulls-eye in the same turn and the next player to go is within three dart throws of doing the same, they are given a chance to tie.

Should a tie arise, a tie-breaker or one on one round begins. You break the tie by giving each player the room to shoot additional rounds of 3 darts, and it must hit the inner bull’s eye.

When each additional round comes to an end, the player that was able to hit more inner bull’s eyes than the other wins the match.

Here are some tips to better improve your accuracy

Here is a guide for your performance

Frequently Asked Question About Around the Clock Darts

How tough can the game get?

Even though more advanced players sometimes avoid the game, it can get really challenging with some modifications to the rule-set.

Can you throw all darts at once?

It’s not necessary to throw all darts all at once. You can even win with the first or second.

Around the Clock is one of the best games you can find out there. To be a professional, you must be able to hit cool shots.

And you can never know which number you need to hit to finish off so you should just learn all you can. You could also learn how to play shangai darts, how to hang your dart board, tips to become good at darts and how to play baseball dart.

Around the Clock is an incredible darts game to allow you to hit other numbers on the dartboard. Playing with friends will definitely help you improve.