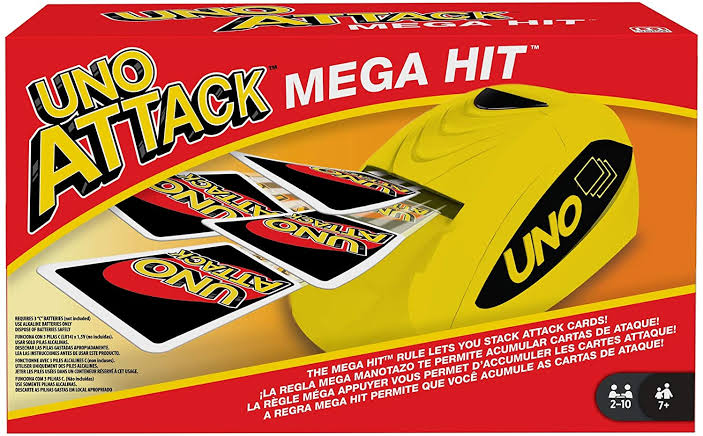 If you’re looking for a fast-paced, unpredictable card game that offers a lot of fun, then check out this guide on Uno Attack rules. Once you learn the ropes, you can enjoy the title and defeat your opponents consistently.

UNO Attack expands on the original UNO premise by including a bizarre card launcher that serves as the game’s specialty.

Playing this pastime with your kids is pretty entertaining as they’ll enjoy the ‘Attack’ section of the game, which features a system that launches cards at the group when they’re forced to pick up cards.

As with any other variation of UNO, players fight to be the first to discard their cards while also adhering to the original rule of shouting ‘UNO’ once a participant is down to their final card.

Continue reading to learn more about this fun card game and some useful hints.

What Is UNO Attack?

Uno Attack was launched in 2011 and is marketed in certain regions as Uno Extreme. However, there are some distinctions between Uno Attack and conventional Uno, the most significant of which being that participants in Uno Attack don’t pick their cards from a deck!

Rather than that, a specialized card launcher is employed to generate cards. Players activate the launcher by pressing a button, which then shoots out cards. As you might expect, this launcher is much more than a delivery technique; it’s, in fact, the star of the show in a number of ways.

Due to this more thrilling distribution technique, Uno Attack became a highly popular children’s game. It’s always entertaining to watch a card shootout, and Uno Attack is an easy recommendation for board game nights.

UNO Attack requires a deck of UNO cards and a unique machine that spits cards at participants. Fortunately, everything you need for UNO Attack is included in a convenient set, which includes:

The object of the game

The goal of this title is to be the person to earn 500 points. The first player to discard all their cards earns points for the cards remaining in the hands of their opponents’.

The first thing to do is to shuffle the cards and deal seven to each player.

Before play can begin, the Attack Card Launcher must be configured. First, make sure the launcher’s batteries are fully charged and turn it on.

Next, pick one card to serve as the discard pile, set it on the launcher, then open it and put the remaining deck inside.

Also, ensure that the launcher is placed in the player’s line of sight whose turn it is.

Be aware; cards do not automatically fire out when a participant clicks the launcher’s button. After pressing, you will hear a ‘ding’ signaling the following person’s turn.

The game can begin after the launcher is configured and the appropriate amount of cards are dealt.

As usual, the player to the dealer’s left starts the game. However, you may begin in any order you like. If a player is unable to play a card, they must hit the launcher’s button. This randomly distributes cards to the participant, or at times, no cards are distributed at all!

Instructions on how to play UNO Attack

UNO Attack is similar to previous versions in that players must match the color or number to the card set on the discard pile. If any participant is unable to play a card, then that player has to hit the launcher’s button. Afterward, the participant adds any card that comes out to their hand.

The play continues to the left. As with any other UNO game, if a player only has one card in their hand, they must yell UNO to alert the other gamers.

If a participant fails to do so and is apprehended, they must push the Uno Attack Launcher twice.

When a person successfully discards all of their cards, the round ends, and the winning player receives a score to sum up their total.

Because UNO Attack games are typically short, it’s a good idea to incorporate a scoring system to extend playtime.

Assign a target score of 500 points. Each time a participant wins a round, the remaining players disclose their cards.

Add up all of the numbered cards remaining to give the winner a total, and keep track of it as a running total across successive rounds.

When a player reaches 500 points, they have won the game.

It’s worthwhile to be aware of the non-numbered cards and their effect on games. These include the following:

For example, if this card is shown right away in a game, the dealer gets to go first. Then, instead of going left, the game travels to the right.

If this card is shown at the start of play, the first person is skipped, and the following player starts the game.

Any cards that eject from the launcher must be added to the hand(s) of the player who activated it. The person that played the Wild All Hit card doesn’t need to press the Launcher button). After that, normal play resumes.

The player who initiates the action adds the Launched cards to their hand and forfeits the turn. Play continues normally with the following player, with the chosen color determining what must be played on the discard pile.

Is there a rule in UNO Attack that requires players to play cards if they have the correct card?

This is referred to as ‘Reneging,’ and it is permitted for players to do so, but they have to press the launcher as though they are unable to proceed.

What happens if the cards get stuck in the launcher?

After shooting, any card that’s stuck in the launcher should be gently removed and put in the offending player’s hand.

It is critical to remove these cards since, if left alone, jamming can occur and cause harm to the system.

UNO Attack is a card game worth learning about since it offers a fresh take on a well-known classic while maintaining familiar gameplay.

In addition to UNO Attack, there are a variety of other games available that can catch your fancy.

Check out some of our other favorite card games, re-learn classics like chase the ace, for your next game night.

Additionally, you can try going through some of our guidelines for outdoor games for warmer weather. Finally, learn about Kan-Jam rules for family-friendly outdoor activities that are excellent for any upcoming barbecue or picnic.