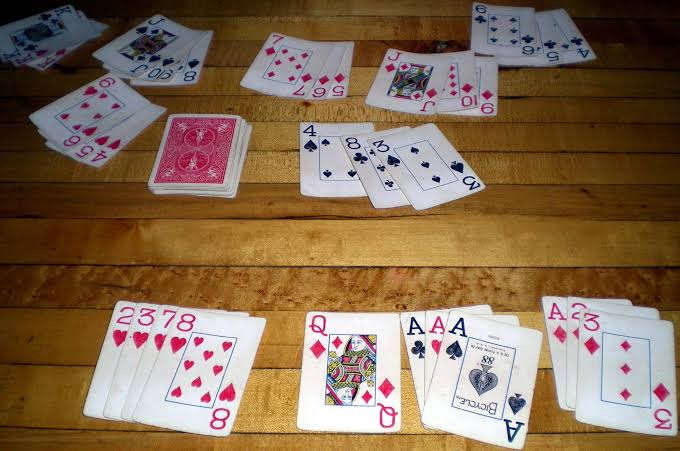 This title is a multi-player card game similar to other rummy variants but with purchasing and going out aspects; let’s explore Liverpool Rummy rules.

The game is played in a similar way as the contract rummy, with one exception.

If a participant cuts the precise amount of cards necessary to deal with a hand and leaves one face-up card, it reduces the cutting player’s score by 50 points.

How to Play Liverpool Rummy

Liverpool Rummy can have as few as three players or as many as eight players.

Everyone is out for himself in this game.

There aren’t any groups or collaborations.

To play this game, you need two or three regular 52-card decks.

It can be more than that or reduced depending on how many participants are playing the game.

Each 52-card deck has two jokers added to it.

It can be above a King, or it can be played below a 2.

As always, jokers are wild cards that can replace any other card in the game.

The game started with card shuffling and then cutting to see who goes first.

After that, any player in the preliminary round has the option to cut their cards.

Each participant will get one card when the deck is shuffled and cut.

When a player draws a low card, they deal with the first round of cards.

The person on the left of the present dealer becomes the next dealer after each round.

The player at the dealer’s immediate right is in charge of cutting the deck.

This is usually the person who dealt the most recently finished hand in the previous round.

There are seven rounds in a game of Liverpool Rummy.

Each player receives 10 cards from the dealer in the first four rounds.

Afterward, the dealer deals 12 cards to each player in the final three rounds.

The cards are dealt in a clockwise direction, starting with the player to the dealer’s left.

Next, the deck is shuffled, and the cards are dealt out face down.

Once everyone has been given their cards, the leftover is placed face down as the “stockpile.”

This pile should be kept in a common area where all participants can easily reach it.

As the top card of the stockpile is pulled, the “discard pile” is formed by placing it face up next to the stockpile.

The first round of the game begins with the player to the dealer’s left.

Next, Liverpool Rummy rounds are played to complete a “contract,” which is a precise set of melds.

The melds are in the form of sets and sequences (runs).

At the same time, a sequence (run) contains four cards of the same suit and sequential value (10-J-Q-K).

The contract difficulty increases for each round; winning the first round is much easier than the fourth or fifth.

On each player’s turn, they must draw, meld, or lay, and then discard their cards (if that’s an option).

Discards must be placed face-up in the ‘discard pile’ at the end of every play.

The round winner is the first person to complete the contract and discard their entire hand correctly.

According to their point value, all leftover cards in other players’ hands are scored at the end of a round.

A Liverpool Rummy player must have a combined score of zero after all seven rounds to win the game.

Multiple Sequence Contracts: If a contract calls for two or more sequences, the sequences must be from distinct suits or not be sequential.

Laying Off: Before any player can lay off the cards in their hand, they have to finish the round’s contract.

Once a contract is completed, the player can only add cards to the melds already on the board.

The player can create no new melds.

Buying: Any player is allowed to “buy” an out-of-turn discarded card, provided the participant whose turn it is doesn’t want it.

Out-of-turn card purchases cost a player a stockpiling card as a punishment.

If more than one person tries to purchase the same card, the player sitting closest to the in-turn player gets priority.

Jokers: If more than one player has already fulfilled the contract for a round and one of them has laid off a sequence containing a Joker, the other players may replace the Joker with the card that completes the sequence correctly and remove the Joker from it.

Once the Joker is taken, it must be placed somewhere else in the same turn.

Only jokers from sequences, not from sets, may be used.

Penalties: If any of the participants lay an incomplete meld, it will cost them 50 extra points, which will be deducted from their final score.

It is possible to make an incomplete meld by combining three different cards, two different sets of cards, a “turning the corner” sequence, or several suits.

Perfect Cut: Players who cut the deck are penalized by 50 points if they are unable to cut the exact number of cards needed to deal with the hand and provide the discard pile (regardless of round).

Empty Stock Pile: Supposing the stockpile runs out during the game, the discard pile is shuffled, cut, and turned face-down before the next round begins.

The previous discard pile’s top should be placed face-up on a new discard pile before shuffling.

In the event that both piles are exhausted, the round comes to an end, and the cards left in each player’s hand are tallied up.

In Liverpool Rummy, the winner is determined by summing up all of the cards left in each player’s hand after winning a round.

After a round, your score is reset to zero if you win. These results are kept up to date throughout the entire game.

Thus, the game is won by the player with the lowest score at the end of all seven rounds.

Penalties and perfect cut prizes are deducted/added to the final score of each participant.

Each card’s point value is listed on the score sheet below.

Tips and Strategies for Winning

● Use jokers as much as possible because they are quite valuable in terms of points.

● Take cards from the discard pile that you don’t need if you think your opponent needs them.

Then, when they put their hand down, you can always add to their sets and sequences.

● Make reasonable decisions about the cards you discard so that your opponents are forced to buy your card.

● Keep a close eye on the cards your opponents discard to figure out what they’re up to.

● Don’t play sequences that are connected, and do not place incomplete melds to avoid paying penalties.

Are Gin Rummy and Liverpool Rummy the same game?

Gin Rummy is a very different game from Liverpool Rummy.

The participants in Gin Rummy have one objective, to maximize their scores (that is, be the first to get to 100), while in Liverpool Rummy, the players with the lowest score win the game.

Furthermore, there’s a contract in LiverPool rummy and not Gin Rummy.

In a game of Liverpool Rummy, how many cards are dealt out?

Depending on the number of players and rounds in a game of Liverpool Rummy, a certain amount of cards will be dealt.

For example, the first four rounds will have 40 cards, while the final three rounds will feature 48 cards.

How many decks can you use in the game?

LiverPool Rummy is similar to the rummy games.

However, these card games can be played with easy-to-understand rules.