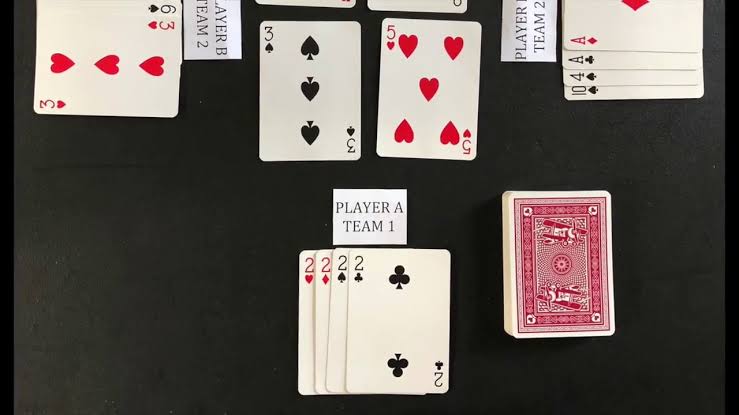 It’s a perfect title to play when looking for an easy-to-learn yet highly competitive game which can be quickly set up.

To play, all you need is a standard deck of 52 cards and three willing players.

Once these are available, you can get started with the game immediately.

If there are over eight players, you could use two decks.

Since Kemps rules forbid talking, it’s crucial to have a good rapport with your teammates to win.

Like Rummy 500 and Garbage, Kemps requires a deck of cards to play, and you won’t be using Joker cards.

Let’s now dive deep into the tips and strategies for Kemp card game.

What Exactly Is Kemp Card Game All about?

Also called Camps card game, this title is in the matching genre of games.

In Kemps, players are divided into two teams who aim to create a hand that consists of a four of a kind.

This game has a unique aspect which is that it requires camaraderie, teamwork.

Teammates have to sit opposite each other, and they’re only allowed to communicate with gestures.

This adds another layer of challenge and strategy to this card game.

The title is played with teams of two participants and at least two teams are required to play.

But it can also be played with as many as six teams once the available playing space is large enough.

It you find other team-based card games enjoyable, you’d also like Kemps.

Objective of the Game

Another alternative is to win by the hand by saying “STOP KEMPS” when a player from the opposing team obtains a four of a kind before their teammate says “KEMPS”.

Game goal: In each of the hands, the losing team gets a letter of the word “KEMPS” as a penalty.

The first team that spells the complete word K-E-M-P-S becomes the loser.

Like Rummy 500 and Garbage, Kemps card game only requires a deck of cards to play, with the Joker cards not used.

If you feel like playing a game that can be quickly set up and cleared away, Kemps is an excellent option to consider.

You can make use of playing cards once players are able to quickly determine their face value.

Themed-decks such as these Star War cards are popularly used.

You can use them to play Kemps.

However, it might be better to opt for a traditional deck such as these Maverick playing cards.

Ultimately, the gameplay is played the same way whether you choose a traditional or themed deck.

Make sure there are even number of players, divided into teams of two.

Before any cards are dealt, teams should talk for a few minutes.

In a Kemps card game, as many as six teams are also allowed to compete against each other.

Since no talking is allowed in the game, decide quickly a unique gesture or signal to be used in unison with your teammate.

With this gesture or signal, either you or your partner will notify the other party of a completed card sequence.

And the signal can be anything so long you’re not talking.

Good examples of a signal you can use include holding your cards in a particular manner and tapping the table.

Ensure the gesture you choose is non-verbal and doesn’t occur below the playing space or table.

Also, make sure that when the cards are dealt, players sit opposite each other.

They should also be diagonal from each other if possible.

That way, they won’t be able to directly see their partner.

Apart from that, the seating arrangement will also make it easier for players to keep an eye on each other.

Once all players are in position, a player will shuffle the pack of 52 cards.

Then, they’ll deal four cards to every player.

Jokers might be used to make the gameplay easier since such cards will serve as a substitute for any card missing in a sequence.

Then, the dealer will put the remaining cards in the center and draw four more cards from the top.

Lastly, they’ll place the cards face up in the center, and then the game starts.

Immediately the four cards have been placed in the center, each player will check their hands quickly.

Players are allowed to swap a single card with any card from the center.

This action isn’t taken in turns; thus, players will often have to race against their opponents.

As a matter of fact, the game often becomes intense at this stage.

Once all the players have finished making swaps, the four cards left in the middle are removed.

The cards are put into a discard pile and won’t be used for the remainder of that round.

Therefore, ensure you don’t inadvertently leave something in the center.

The game continues in that manner until a player has obtained a four of a kind.

Then, they can signal their teammate successfully.

If you think your partner has got a four of a kind, you should yell “Kemps”.

This action will stop that round, and your partner will then show their cards if they’ve succeeded.

This gives your team one point, with all cards returned and reshuffled for the next round.

Teammates are also allowed to quickly leave the table and talk again before this.

That can help in a situation where you want to change your signal or gesture for the next round.

But if “Kemps” is incorrectly called, then your team loses one point.

However, the game goes on.

In case you suspect another team has got a four of a kind, you’re allowed to call “Cut”.

If you take this step, the player you suspect must show their cards.

If you’re correct, the round comes to an end, and you’ll earn one point for your team.

But if you’re not correct, then you’ll lose one point, and the game goes on.

Generally, Kemps card game is played to an score agreed upon before the game starts.

For instance, you can agree the first team that earns five points is the winner.

Or if you want the game to be shorter, you can just play one round.

Here some tips that can help you defeat your opponents in a Kemps card game:

A single game can be won by a “counter-kemps” as well as explained above.

We recommend paying close attention to your opponent’s and your teammate as you try to complete your sequence of four cards.

Some Variations of Kemps Rules

When looking to add a fresh twist to the gameplay, there are several different rules you can include in Kemps card game.

The signal rule is the most common variant added to the game’s rules.

Here, once a team wins a round, the other teams are allowed to guess what their signal was.

If the guess is correct, the winning team will lose their point.

But this can only happen once in a game.

The rule is created to ensure teams don’t make use of obverse signals.

This is another fun rule: Adding the Joker cards to the pack.

These Jokers can be made use of to do many different things so long all players agree.

Therefore, they can stand for any other card.

The rule significantly increases the importance of Jokers, particularly due to the fact that they’re only few in the pack.

Lastly, there’s another common variation of the rule where every player is dealt with five cards instead of four.

With this rule, the game becomes more challenging as the players will find it harder to spot opponents already with four of a kind because these players won’t swap any cards.

Swapping of cards make them easy to spot.

Can I play this game for free online?

However, they don’t contain the nuances that make the title a fascinating physical card game.

How do I win in Kemps?

To win in this game, players will exchange cards to assemble hands of a four-of-a kind.

When am I allowed to yell “Kemps”?

You can do so any point in the game.

However, you’ll be penalized if your partner doesn’t have a winning card.

What’s the number of cards dealt in the game?

Each player is dealt four cards in a Kemps card game.

If you’re fed up with playing games like Monopoly, then Kemps can be an interesting option to try out for a change.

It’s one of the most fascinating four-card game out there requiring even number of players, a standard deck of 52 cards, and an open space to play.

The object of Kemps card game is to obtain four cards of equal rank.

For example, 4 Aces or 4 Queens, and notify your teammate with a signal or gesture to shout “Kemps”.

The title has several variations around the world, and it’s ideal for players of all ages.