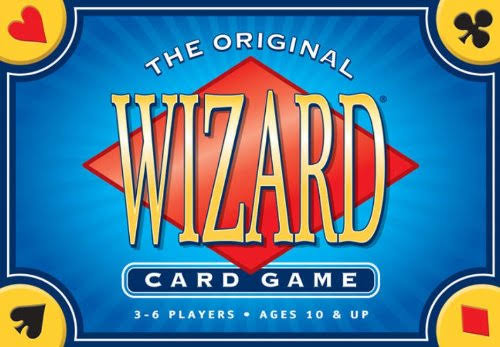 The Wizard card game is a trick-taking pastime designed by Ken Fisher in 1984. It’s quite popular with a lot of people.

This game features a complicated scoring system that adds more to the fun of it. No other card game offers as much chance for skilled play yet is so simple to learn.

It’s the only game in which a skilled player can always come out on top no matter what cards are dealt.

While this is unquestionably a game of skill, younger or less experienced players can participate without negatively impacting the game’s overall quality.

And with an intricate scoring system, you’ll find that seeing who won isn’t quite as straightforward as whoever wins the most rounds.

Most people enjoy playing card games that require trick-taking, like Euchre. Despite this, the Wizard card game is a standout. The regular playing cards you’re all familiar with are included along with some additional unique special cards in this game’s unique deck of sixty cards.

Four Wizards and four Jesters are included in this set of one-of-a-kind playing cards. In order to play the Wizard card game, you’ll need at least three people. Thus it’s not ideal for two players. However, with a maximum of six players, it’s a fantastic card game for socializing.

There’s a learning curve, but once you get the hang of it, you’ll have a lot of fun. A player needs the most points at the conclusion of the Wizard card game in order to win. The amount of participants determines how many rounds you’ll play

If you want to win, you must precisely predict the number of tricks you’ll take in each round of play. It’s possible to win points even if you end up bidding $0! In order to win the Wizard card game, players must plan ahead and use their best judgment.

Attempting to bid too high or low can result in a deduction of points. In the following paragraphs, we’ll go into greater detail on how to play this enjoyable card game. First, let’s take a closer look at the equipment you’ll need to get started. 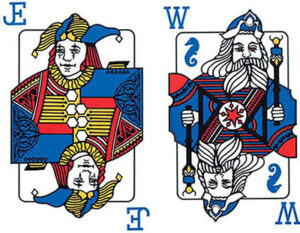 The Wizard card game’s objective is to get the maximum points by correctly estimating the number of tricks you’ll take each round. Thus, unlike in some games, you do not get points solely by performing stunts.

Your score is determined by the accuracy of your forecast prior to each round. As a result, beginners may find the Wizard card game rather tough. However, it is a game that you will improve at with each play.

You’ll need a deck of cards that is completely unique for this game. You can easily find this online. You also need to obtain a score sheet in addition to the cards.

If you’ve ever played with playing cards before, you’ll recognize some of the cards. These include the traditional four suits (hearts/diamonds/club/spades) and the regular numbered/face cards in each of these four suits.

However, you’ll also receive four Jester cards, which look a lot like Joker cards, as well. You’ll also get four Wizard cards with your purchase. Jesters and Wizards are always the lowest and highest value cards, respectively.

Before starting, determine who deals the cards and who keeps track of the game’s progress. As soon as one player has done this, each player should take a card from the deck. The first dealer will be the player with the most valuable card.

As long as the game lasts, the score will be kept by the player holding the lowest-valued card in their hand. After drawing the same card, both players must choose a new one from the deck.

The dealer should reshuffle the cards once the roles have been assigned. If you have one, you can use it to shuffle the cards automatically. After that, the dealer will deal one card to each player and set the others aside in the middle.

As a starting point, the dealer must give each participant a single card, with the other cards arranged in a central pile.

The round’s trump (suit) is determined by turning over the top card of the pile.

Instead of having a mandatory trump, players will be free to choose their own in rounds in which the Jester or Wizard are overturned, depending on which card is overturned first.

The deal is passed to the player on the left at the end of each round, who reshuffles the deck and distributes two cards to each player.

At this moment, the gameplay is the same as it always has been. The number of cards in each deck grows by one after each round, which is the sole difference in the way rounds are played.

Each player receives all of their cards before the final round begins depending on the number of players.

How to Play Wizard Card Game

In other trick-taking and Rummy games, players build tricks and lead the trump card with the cards in their hands.

During each game round, each player is required to predict how many tricks they will take home.

There are only a limited number of tricks up for grabs per round. The number of predicted winning tricks cannot surpass the number of cards in each player’s hand.

Writing down how many tricks each player expects per round is a good idea, as these will be tallied at the end of the game.

Tricks can only be won by leading with a card that matches the suit of the trump, regardless of what the first flipped card is.

Even if the trump card doesn’t match, each player must play a card from their own hand. The following is the order of victory:

In this game, Jesters always lose, but all of your cards must be played at some time in order to win.

How to Score In Wizard Card Game

Everyone should remember that the winner of Wizard isn’t necessarily the one who wins the most tricks.

It’s common for the player who accurately predicts the trick count to win the game.

If a player correctly predicts their trick number, they receive 20 points and an additional 10 points for each trick they win.

A player loses 10 points from their rolling total for every incorrect round but gains 10 points for every trick they win during the round.

Final-round results in the winner being decided. The player with the greatest score at the end of the game will be awarded the victory.

This is called the “Canadian Rule,” and it states that when the dealer (the last to bid) has more points than any other player (and not only a tie for the lead), he may not bid a total number of tricks equal to the number of cards in hand, except by bidding zero.

As a result of this rule, the game will be tougher, and the players will be forced to play outside of their comfort zone.

Is it possible to play Wizard with two players?

There’s a two-player version of Wizard; however, the rules are significantly different, and it does not require a specific two-player deck.

Can you a standard deck of cards to play Wizard?

If you have two decks of cards, you can play Wizard. However, it is more difficult to set up and more time-consuming.

With 60 cards, you’ll need two decks, and you’ll also need to pick ahead of time which extra cards will be used as Wizards and Jokers in your game.

What if all the participants play a Jester in Wizard?

If all four players play a Jester, the first person to play it wins the trick.

Wizard is a fun card game for adults. It’s simple to master the basics yet difficult to win. Try the Wizard card game if you want more demanding games.