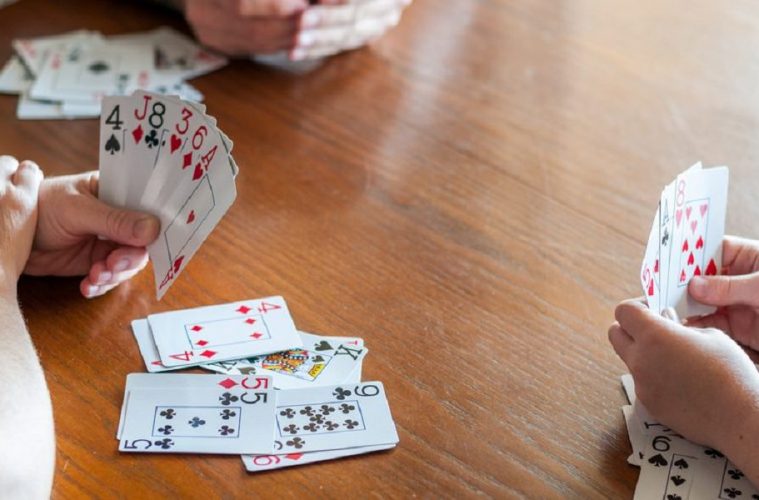 How to Play Go-Fish, Rules and Instructions

Go Fish is among the most popular card games for children. To play it, you need at least 3 players and a standard deck of 52 cards.

The object of the game is to collect as many “books” as you can, with a book being 4 cards of equal rank.

The player that has the highest number of books at the end of the game is the winner. Each player receives 10 cards from the dealer.

You pretend as you deal out the full deck that you have one more player than you really do. Let’s explore more details on how to play Go-Fish.

Whether you’re a professional Go Fish player or a newbie, these tips will help you play the game better.

Go Fish is a card game that involves a minimum of 2 players and a maximum of 5. It requires the use of a standard 52 playing card deck.

This game is usually seen as an easy game, which young children enjoy. Yet, it’s also a fun pastime for people of all ages.

In the game, the objective is to collect the highest number of “books”, or four of a kind, when the game ends.

How to Set It up

Before the start of the game, the person that will serve as the dealer is first chosen from the players.

To determine who the dealer is, every player will be given 1 card from a shuffled deck of cards. And Aces will be high and twos low. Then, the player who is holding the lowest card becomes the dealer.

The players will form a circle and the dealer will then shuffle the cards.

The player, who is by the dealer’s immediate right, will cut the shuffled deck. After that, the dealer will pass out the cards face down in clockwise order, with one card taken at a time.

If the number of people playing is less than 4, each player will be given 7 cards.

But if more than 4 participants are involved in the game, each player will be dealt 5 cards. Then, the dealer will put the remaining deck face down in the middle of the circle, forming the “ocean”.

How to Play Go-Fish Card Game Step by Step

Play in Go Fish primarily revolves around a set of rules, which is similar to other card matching games.

The game kicks off with the dealer asking a particular player whether they’re holding a specific card rank (Aces–Kings).

The requesting player has to hold a minimum of 1 card from that specific rank for making a request.

For instance, if Player 1 has no 7 in hand, they can’t request any 7 from another player.

Here’s an example of a request: Player one asks, “Player two, do you have any 7s in hand?”

Then, Player two will offer all the 7s with him/her to Player one. After that, Player one will make a new request to any player.

If Player two has no 7s, their response will be “Go Fish.”

When told to Go Fish, a player will take a card from the stock, and the turn will now pass to the next player in the game in clockwise order.

The Go Fish card game mainly involves matching cards, with its object entailing the creation of 4 of a kind sets.

As soon as a player has been able to complete a 4 of a kind, they’ll set the four cards face up at their front on the game board.

As soon as a set is completed, there will no longer be cards of that rank in hands or in the stock. So, players can’t call for the rank in question.

Also, the sets can’t be used in play any longer.

Let’s assume the deck is dealt and you have been dealt your seven cards, and in your hand, you have three Aces, one Three, one King, one Queen, and one Two.

It’s your turn and since you only require one more Ace for creating a book, you make a request to the player at your front, asking whether they have any Aces.

With a smiling face, they respond by saying “go fish”.

Reluctantly, you’ll take the top card from the ocean and, with a smiling face, you see it’s an Ace.

Then, you will put the four cards at your front so that all the other players can see you created a book.

After a round passes, it gets to your turn again.

You make a request to the same player in your front if they’re holding any Kings. In this case, they don’t smile and pass 3 Kings to you instead.

You create a new book and the gameplay goes on in your favor.

Some Tips to Play Go-Fish Better

Now, let’s show you how to win Go Fish consistently!

Here are some strategies you can use to hone your skills:

Whether you play Go Fish card game online or offline, it’s worth noting some variations of the game:

As expected, this variant is mainly played in Australia. In this version, players make books from two of a kind, and not the traditional 4.

Australian Go Fish allows the use of Jokers in play.

The gameplay in Backstab Fish lasts longer than traditional Go Fish. In this version of Go Fish, almost all the rules are the same as the standard game.

However, 2 decks are in play, and Jokers are included. Featuring 108 cards, Backstab Fish is perfect for large groups. (Though with patience, it can also be enjoyed by a small number of players.)

Students will find Education Go Fish helpful. In place of the conventional suits, cards are grouped into thirteen divisions.

For example, Go Fish American History can comprise of groups such as landmarks, presidents, dates, and others.

Then, each card will contain facts about the subject on the card for the player (student) to gain knowledge from. Also, a player could request if someone is holding any landmarks and obtain the Statue of Liberty (for instance).

Educational Go Fish can be an exciting technique for students to gain knowledge about different subjects.

This option is an Indonesian variant of Go Fish which means “drink” in English.

Minuman is almost the same as the traditional Go Fish. But it has the additional rule, whereby players will take a drink from an alcoholic beverage to draw from the ocean.

At the end of the game, the loser will drink up all their drink if they’ve not done so already.

What happens when you run out of cards in Go Fish?

You are to draw five from the stock if possible, but if there are no cards left, you must wait until the round comes to an end.

Do I need to pay to play Go Fish card game online?

You can find free simulators of Go Fish card game online. They can come as a downloadable executable. Also, they’re available as Android or iOS apps.

There are lots of options to pick your choice from.

How can I play a Go Fish game with 3 players?

When there are 3 players, each player will be dealt five cards when the game begins. Then, play goes on as usual.

Go Fish is one the most popularly played card games by kids, but it’s also a fun pastime for adults. A minimum of 3 players is required to play, and you also need a standard deck of 52 cards.

To learn how to play Go-Fish, you first need to note that the aim of the game is to collect as many “books” as you can. 4 cards of equal rank make a book.

Any player with the highest number of books at the end of the game is the winner. For professional Go Fish players and rookies alike, this can be a thrilling game to play with friends and family!

How to Play Tarneeb – Rules and Basic Explained

How to play Go-Fish Game Rules and Instructions