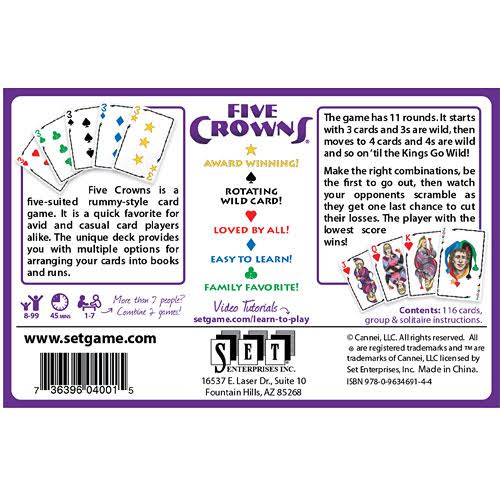 It is one of the many versions of the popular card game, Rummy, but uses five suits instead of the traditional four suits.

This offers a unique and interesting modification to Rummy since the inclusion of the extra suits makes it easier for kids to earn points during the game.

To win, you must score the lowest number of points.

This game is ideal for players aged 8 years and above.

Just like other Rummy versions, in Five Crowns, it’s crucial to understand and form runs and sets while playing.

What do runs, sets, and wild card mean?

These concepts will be covered in this section.

A run is a sequence that contains three or more cards (for example, 3 – 5) with the same suit.

Players are allowed to replace any card in the sequence with a joker or wild card.

Also called books, sets are three or more cards that have the same value irrespective of the suit.

Players are allowed to replace cards in a set with jokers or wild cards.

A wild card can be used as a substitute for any card in a run or book.

The value of the card that serves as the wild card for a specific round changes.

Players aim to earn the lowest possible score on completing 11 rounds by turning their hand of cards into sets and/or runs.

What You Need to Play

To play this game, you need a specific set of cards.

Optionally, if you like playing on vacation, you’ll find this Five Crowns set sold in a portable travel tin helpful.

If you’ve bought the set and all the participants are ready, the game can start.

The included decks aren’t the same as a standard deck of cards because the former contains stars as an extra suit.

To keep score during the game, ensure you’ve got a pen and paper or a mobile app on your smartphone.

Choose a player at random that will play the role of the dealer before the game starts.

The number of cards players deal depends on the specific number hand you’re on.

For instance, on the first-hand, players will be dealt three cards each, with the second hand four, and the game proceeds in that order.

This goes on in this manner till the eleventh hand in which players should have thirteen cards.

Put all cards not dealt to players in the middle.

This is referred to as the draw pile.

The dealer will have to over-turn the card on top of the draw pile and create a separate pile called the discard pile.

This is the same concept used for every hand played.

The player by the left of the dealer will start the game.

And at the beginning of each player’s turn, they’re allowed to pick the card on top of the draw pile or discard pile to their hand.

Participants should make use of the cards in their hand for creating runs or sets.

Play continues till one of the players can make a run or set using all of the cards in their hand.

Once this has taken place, play will go round one more time with the remaining players striving to make a set or run using their cards.

Review the points earned and collate them.

Once all participants are satisfied with the results, the next game starts.

Keep in mind that every time a new round starts, players should have an extra card than what they had in the previous round.

The player who wins each round is that participant that got rid of their cards in a set or run first and will earn 0 points for the round.

Allot points to all the remaining players based on the cards they’ve at hand.

All the remaining cards carry their face value; for instance, 10s are valued 10 points.

Bear in mind that the aim of a Five Crowns card game is to emerge as the player with the lowest number of points.

Why does this game have five suits instead of the traditional four?

Five Crowns has the fifth suit to make it easier for younger players to play. Rummy games can sometimes be hard.

What Are the Alternative Games to Five Crowns?

Since the title is among the several variations of Rummy card game, there are many other games out there following similar rules.

Conquian is a popular option, and it’s a bit tougher than Five Crowns card game.

If what you seek is a card game for kids, then check out Pitty Pat.

Five Crowns card game is designed by SET Enterprises and played with two decks of 58 cards.

The title offers a unique and interesting variation on Rummy since the addition of the extra suits makes it easier for kids to score points during the game.