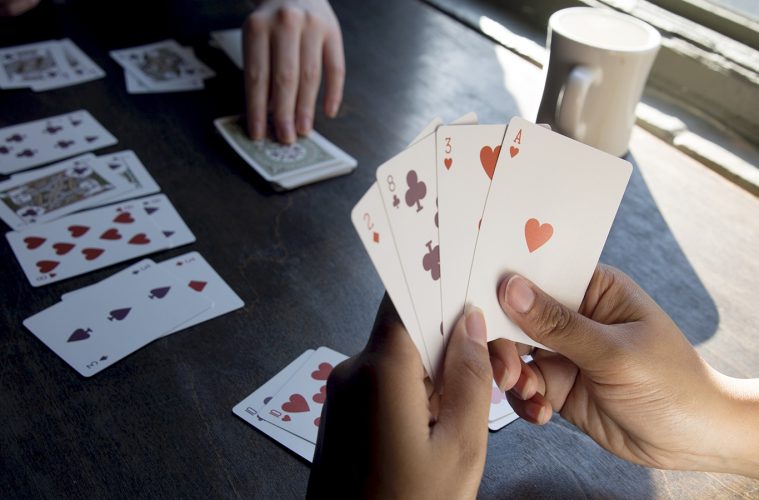 We all love a fascinating card game.

If you’ve been searching for a fun activity to engage in with your spouse or partner, there are card games for two people, which will easily turn a boring night at home into an entertaining one.

Ensuring a deck of cards is handy is always a nice idea since either you or your partner/pal can be in the mood for an impromptu game night.

You can select from a bevy of games if you’ve a standard deck of cards, such as classics like Double Solitaire and Slapjack.

However, if you don’t have a deck of cards around, you can also try out some online card games as those work just as well.

Let’s look at some of the best card games for two people. You can play these games with a physical deck or online.

The game of Nertz — also called Nerts — is quite unique and energetic. It involves 2 players with each of them aiming to eliminate a 13-card “Nerts” pile.

To play this game, you’ll need to harness some skills, since you’ll be doing a lot of things at the same time. These include stacking, sorting & playing Solitaire (as a mini game) all at once.

The game starts with each player shuffling a whole 52-card deck. The 2 of them must hold a unique print at the rear face of their cards.

Then, each player will deal thirteen (13) cards face-down to themselves, and after that, four (4) cards face-up side by side.

The stack of 13 cards is referred to as the “Nerts” pile. And the aim is to eliminate all these cards.

The work piles are those 4 face-up cards, while the remaining ones from the deck are then kept face-down as the stock.

When play starts, you may sort through the stock 3 cards at a time, just like you do in Solitaire.

Consider leaving an open space between the players and their decks. This is used as a common play area.

To get started, each player will turn over the card at the top of their “Nerts” pile face-up.

You’ll get rid of these cards by putting them on top of either your work pile or by making piles in the common play area, beginning with Aces.

Also, you or your opponent can add more cards to common area piles. However, players may only stack in numerical order (Ace low) & by matching suit (Ace of Spades, followed by two of spades, three of spades, etc.).

Play is simultaneous and frantic, so there are no turns in this game.

The 1st player to get rid of their “Nerts” pile will yell “Nerts!”. When that’s done, play will stop, and the players will now collate their score.

It’s at this point that you require different prints to your decks, as that will enable you to separate who has which card.

Reset everything and deal again. Then, further hands are played until one of the players attains an agreed target score, which is usually one-hundred (100) points.

As the game progresses, things could become chaotic.

Players are often reaching across one another or are waiting for specific cards to be played in the center.

Also, they’re running through their stockpiles anxiously to get a specific card they passed a moment beforehand.

It’s this excitement that makes Nertz one of the most fascinating card games for two players.

The scoring system of this game rewards players for putting cards in the common area consistently. It also gives them points for moving through the “Nerts” pile quickly.

However, the four (4) work piles are also crucial.

The name of this game sounds funny. That aside, In Egyptian Rat Screw, the objective is to obtain all the cards in the deck.

It’s a fast-paced card-slapping, which 2 people can play very quickly.

To start, take a 52-card deck and deal out the entire deck evenly and face-down to yourself and your opponent.

Players mustn’t look at their cards.

The player, who is to the left of the dealer, will take out the top card from their pile and put it face-up in the middle.

Should the card be a number card, the next player will place a card down as well.

Proceed until your opponent puts down a face card or ace.

If he/she does so, play will go on.

But if the player doesn’t, the original player that puts down a face card or ace will add all the played cards to his/her pile.

In addition to this, we’ve many card-slapping rules in the game of Egyptian Rat Screw.

Doubles can be slapped (two 9’s in one row)

The first player that slaps the pile of cards will get the pile, and if a person slaps a pile improperly, they’ve to add 2 cards to the pile.

If you intend playing the game with more than two players, participants that have been eliminated are still allowed to wait around and slap in to claim cards.

Keep on playing until there’s just a winner with all the cards in the deck.

You’re even allowed to propose a House rule, which stipulates the winner must buy the player with the reddest hand a drink when the game ends.

As a matter of fact, in the majority of card games for two people, the loser is always expected to buy a drink.

One of the simplest card games for two people is Golf, which can be treated like “Mini-Golf.”

As the title suggests, Golf involves attempting to realize the lowest score.

The card game is neat and simple. And it really does follow the idea of the sport remarkably well.

Each player will be dealt six cards face-down. And they will arrange them into 2 rows containing 3 cards each.

The cards left are laid face-down, and the top card is turned face-up to begin a discard pile.

To get started in this game, each player will turn 2 of their cards face-up, while the remaining cards will be kept face-down (no peeking).

Starting to the left of the dealer, each player will take turns to pull a card from the discard pile or the face-down stockpile.

Then, the card picked is either swapped out for 1 of the 6 cards in front of you or put in the discard pile.

To swap out 1 of the 4 face-down cards in your front, lay it face-up in the discards.

As said earlier, the objective of this game is to get the lowest value of cards. This is done by swapping out cards with high value or matching cards with equal value.

Since matches are paired based on columns, we can only have a maximum of three matches out of the six cards in your front.

Proceed with the game until all the player’s cards in his/her front are face-up. Now, add the scores up.

An ace carries  a single point. As for cards 3 through 10, they’re worth their face value.

Jacks and queens carry 10 points (keep in mind that such points are bad).

Each 2 card carries negative 2 points, while kings are worth 0 points.

When you match cards of any value, you earn zero points (all such cards are good).

A game comprises 9 holes (deals). At the end of 9 holes, you’ll collate the scores to determine the lowest scorer. And that person wins the game!

These are just some of the best card games for two people. Other 2-player card games you can try out also include Gin Rummy, Crazy Eights, James Bond, Speed, Idiot, just to mention a few.