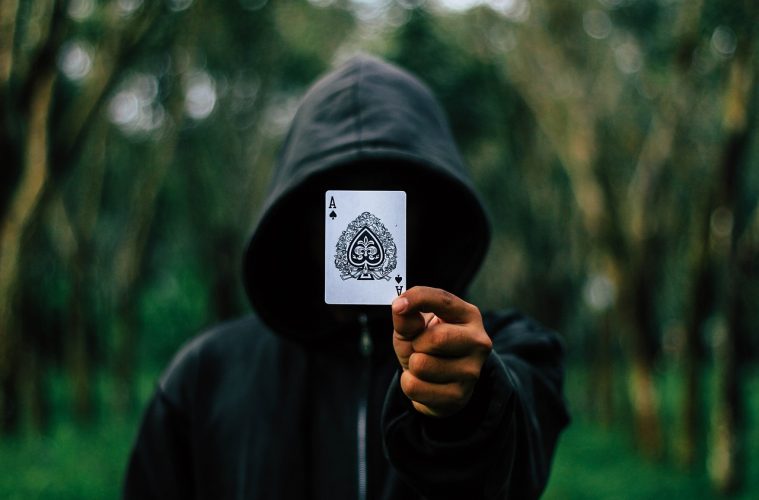 One of the most pleasant activities to engage in and unwind with your pals is by playing cards and slugging it out with them to win a bet. But sometimes, you may need to play this game alone.

For instance, you may find it hard to sleep, or you just don’t have anyone around to play cards with.

Fortunately, you don’t have to sit out this kind of boring moments all alone as there are single-player card games to keep you engaged and entertained.

Let’s look at the 7 card games to play alone.

Accordion is a variant solitaire. You’ll find it quite easy to play.

Take a single deck of cards and deal them out one at a time. Do this from left to right and then move down into rows, leaving some space in between each card.

In this game, the aim is to pile all the cards into a single stack.

A player is allowed to place a card, or pile of cards, onto another card or pile if the top card matches by that number or suit.

You can only match a card (or a pile) to the one by the immediate left, or 3 to the left. Also, continue your sequence through the rows.

For instance, you can put a nine of clubs — your very first card in the 2nd row — on the nine of hearts, which is third from the right on the 1st row.

With the rows, you can save space on the table. And there’s no need to bother about the number of cards in each row.

We’ve two variations on how to play this game. In one, the player deals out every card first. But in the second method, the player starts piling up cards as they deal.

With a bit of skill and luck, you can sequence all the cards together and fold them into one pile. This makes it look like a folding accordion (a musical instrument), from which the name of the game came.

You play pyramid as a matching game, involving a single deck of cards. Here, the objective is to collect pairs of cards that add up to a value of 13 and clear the pyramid of cards away.

In setting up your game, shuffle the deck and deal out 28 cards with their face up to build a pyramid structure.

It’s easier to start at the top with a single card. After that, lay down 2 cards on the next row.

Make sure you stagger them slightly, with each row increasing by one card and cards overlapping the previous row.

Repeat these steps through 7 rows to get a pyramid structure. And set aside the remaining deck as the stockpile.

Here is how to play: You may match 2 cards totaling 13 from the pyramid fully exposed (meaning no other cards are covering them from lower rows).

Also, you can take a card from the stock to pair with a card in the pyramid to give you 13 and remove the pair.

Specific values are attached to face cards. Kings are removed by themselves as they count as 13.

Only open cards can be removed. An open move can be skipped if necessary.

To find more matches, go through the stockpile a card at a time. Also, you can always go through them again as many times as you want until you’re either out of moves or have been able to clear the pyramid away!

Devil’s Grip is another variant of solitaire and is also one of the 7 cards games to play alone. It’s a stacking game that requires 2 decks of cards without the aces. There are 96 cards in total.

Key elements in playing this game involve shuffling them together, dealing out 3 rows of 8 (face-up), and consolidating the remaining cards for a stockpile that is put aside.

The object in Devil’s Grip is to stack the cards based on suit and into piles that have specific values. In the top row, we’ll have 8 piles that comprise 2, 5, 8, and Jack.

Though these could seem arbitrary after going through the rules, they look reasonable on a grid. There are 2s in the top row, 3s in the middle, 4s in the bottom row. These are topped by 5s on the top, 6s in the middle, and it continues in that order.

After dealing out the cards into the rows, everything will appear messy in front of you. However, what you’ll now do is to start stacking according to suit from anywhere.

On putting a card onto another pile, you should draw the top face-down card from the stockpile into the empty space and proceed.

After exhausting all the available moves from the setup, starting with the cards in the stockpile, pull them 3 at a time in a similar manner you do in traditional Solitaire.

Now put these onto the right pile. Again, you should replace any empty spaces you make right away with the top face-down card from the stockpile.

Repeat this step as necessary and cycle through the stockpile in 3s till you no longer have any moves or have sorted all the cards into their piles and become the winner.

If you’re interested in keeping score on incomplete games, you can count the number of cards that you’ve left in the stockpile immediately till you no longer have any moves left.

Note that the lower the number of cards remaining, the better.

This solitaire version is also known as Good Neighbors or Weddings. It’s a quick matching game for every age and levels of complexity.

Start playing this game by shuffling up a full deck and dealing 25 cards out, face-up, in a 5 x 5 grid. And set aside the remaining cards in a stockpile.

Then, you will play the solitaire variant rather quickly and match 2 cards with the same value (two Aces, two 4’s, and so on), which lie adjacent to each other.

This may be to the right, left, bottom, top, or diagonal.

Immediately, you’ve matched and got rid of as many pairs as possible, you should move all of the cards to the left and up to consolidate the remaining part of the grid.

So, any cards on the left-most side of the grid can move up to the next row when you enter on the right-hand side.

You should now use the cards in the stockpile for filling in the remaining part of the 5 by 5 grid at the bottom right and resuming play.

This game is quick and easy to play. Also, it can be slightly more challenging than it looks at first glance.

It’s normal that you may have to reset the game far more often than winning it as you do in regular Solitaire.

Are you a bowling fan? This solo card game variant is for you. You’ll find it handy when you can’t get to the lanes.

In Bowling Solitaire, you’ll make use of standard playing cards for simulating a round of bowling.

And the objective is to move these cards out of play from the 10-pin layout by matching pairs, which will add up to 10 points.

Use the Deck for creating a pair. However, you can simply turn over one card at a time. If you don’t want to do that, the deck will only be used when you’ve to make a new 10-pin card formation.

After your initial deal, you can eliminate any cards worth 10 points from the table. While those cards that are left must be matched together to add up to 10, you can’t match more than 2 cards at a time.

In this game, you’ll use catapults for flinging rotten animal corpses across the walls.

A fascinating card game to play alone, it contains wells that are poisoned, rivers that choke with bodies, and arrows that darken the sky.

There are terrified denizens, which are frozen by the hiss of arrows that tears the air. This sounds like soaring serpents to their frightened ears.

At least, they’re those images, which come up in mind on hearing the name. But it’s not so complicated in action.

You’ll notice more maneuvering of rows and careful cunning. Also, there are less sallying forth and breaching boundaries.

This is the standard North American and Canadian version of Solitaire to the extent that the term, “Solitaire”, became almost synonymous with “Klondike”.

To get started, you can play the easy 1-card draw in which the majority of games are winnable. Alternatively, you can challenge your mind with the 3-card draw mode.

What Is a Card Game?

This is any game that makes use of playing cards as the main tool which the game is played with, whether traditional or game-specific.

There are several card games, which include families of related games (like poker).

We’ve a handful of card games that are played using traditional decks, where there are formally standardized rules. However, the majority are folk games with rules varying based on culture, region, and person.

You play a card game using a deck or pack of playing cards that look alike in size and shape.

There are 2 sides of each card, which are the face and the back. The backs of the cards are often not distinct.

While the faces of these cards could all be unique, we could also have some duplicates. Only the player know the composition of a deck, and in certain cases, we’ve many decks shuffled together to create a single pack or shoe.

Games that make use of playing cards exhibit this property: Cards can only be individually identified from one side.

Thus, each player knows only the cards they’re holding and not the ones held by other players.

Therefore, card games are typically regarded as games of chance or imperfect info since they’re distinct from games of strategy (also called perfect info). This is because in the latter type, the current position is entirely visible to every player throughout the game.

As a matter of fact, a lot of games, not generally placed in the family of card games do, utilize cards for certain aspects of the gameplay.

Certain games which are placed in the card game genre make use of a board. The distinction lies in the fact that the gameplay of a card game is primarily dependent on the use of the cards by players since the board merely works as a guide for scorekeeping or card placement.

But board games, which are the major non-card game genre to utilize cards, generally put more attention on the players’ positions on the board and make use of these cards for some secondary objective.

While looking for the best 7 card games to play alone, you can make your pick from the options above to keep you preoccupied and entertained.