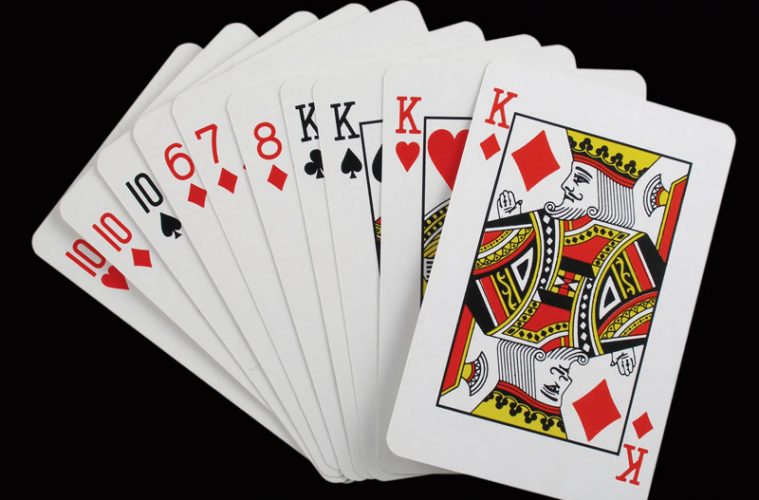 Playing card games is a fantastic way to pass time with your pals. And many of these games allow up to 4 people to play.

4-player card games serve as more of a medium for conversation with friends, with the most popular options even incorporating this activity into gameplay.

In spite of the larger player count, these games still come with special rules, created to ensure smooth gameplay, even though there are longer waiting times between each turn.

To participate in 4-player card games, all that’s required is the standard Anglo American 52-card deck. This deck has four suits of thirteen cards each.

Here’s a list of card games to play with a group of 4 friends (including you).

This is a trick-taking card game, which exploits large player counts. Each player gets 12 cards each from the dealer, with the trump suit revealed by showing the top card in the stockpile.

Each player will bid an estimated number of wins, and the game starts. Then, the participants will play as usual, if possible, following the lead suit.

Palace card game is meant to be played in short bursts. The setup is fast, easy, and to-the-point.

In this game, two 52-card decks are shuffled, with each player receiving three cards face-down from the dealer. Another 6 cards are dealt to them; then, three cards are selected and positioned face-up on the previously set cards.

Each player will take turns playing cards and changing them with cards from the deck. The player that clears their hand after three phases becomes the winner.

Red Dog is a game of luck. It involves the use of the standard deck, where 3 cards are used at each time.

Wagers are made, with 2 cards revealed on board.

If the cards produce a straight, the wager gets returned. If the cards form a pair, a 3rd card is dealt.

And if it’s the same card, the player’s wager gets returned, multiplied by 10 times the initial value.

Switch is a fast-paced shedding game, where players aim to clear cards from the hand. Each player receives 7 cards (or more) from the dealer.

Then, they’ll play one card in each turn, following the rank or suit of the previously played card and drawing one if no valid play is made.

This option is a trick-taking card game, which is designed for 4 players only.

Each player is dealt seven cards, and the trick can be led with any of the cards. The played cards have to follow suit if possible.

The trick is won using the card with the highest rank, and the winner will be the leader of the next trick.

The player that has the least tricks take at the end of seven rounds is eliminated. And the one that has the highest can call for a trump suit, which will override even the leading suit.

Crazy Eights is a shedding game that has many features in common with Switch. In this game, a single 52-card deck is used.

Each player receives 5 cards from the dealer, and the remaining forms the stock.

The top card is revealed, which means the game has started. Each player will match the rank or suit one card at a time.

If a player doesn’t have a valid play, he/she will draw from the card until they’re able to make a play.

Eights are always valid and enable players to reverse if they so wish.

How to Play 4-Player Card Games

These games have the same basic features as other card games for two people, including the same terminology and styles of gameplay.

The concept of dealing is explained as follows, followed by a brief description of the 3 main styles of card games for 4 people.

Choosing the dealer is done before the game starts, via deck-splitting or nomination. The cards get shuffled and dealt one at a time to each of the players.

Then, the undealt cards will form the stock for drawing purposes. The player by the left of the dealer starts in the majority of games where the dealer participates in play.

In 4-player card games, order of turns proceeds in a clockwise manner unless stated otherwise. Let’s now look at the various game types.

Games involving trick-taking are played in rounds that are then further divided into individual tricks.

The first person to play a card will lead the trick and will determine the leading suit. Then, the remaining players have to match suit, while also playing a card with a higher rank to win the trick.

If a player fails to beat the card, as a discard or forfeit, they can play any card. And the winning player will be the leader of the next trick.

Matching games are those that have to do with the formation of specific combinations of cards, like straights or sets. Such games typically make use of the same combinations utilized in Texas Hold ‘Em, like pairs, triples, or flushes.

You can build these sets in different ways based on the rules.

Just as the name suggests, shedding entails clearing cards from hand as fast as you can. Shedding games make use of simple rules for determining what can or can’t be got rid of.

Which 4-player card games can I play using a single deck?

Such games are Switch, Crazy Eights Red Dog, and Whist.

Which of the games is the easiest to play?

You can try your hands on Switch. It’s also extremely popular.

Yes. The fundamentals of games are based on the rules. And you can easily adjust these rules according to your need.

Going through this list of card games for 4 people, you can find the option that works best to kill time and share gist with friends. Other games you should try out;

How to Play Tarneeb – Rules and Basic Explained

How to play Go-Fish Game Rules and Instructions

Interesting Chinese Card Games To Play At Home or Anywhere