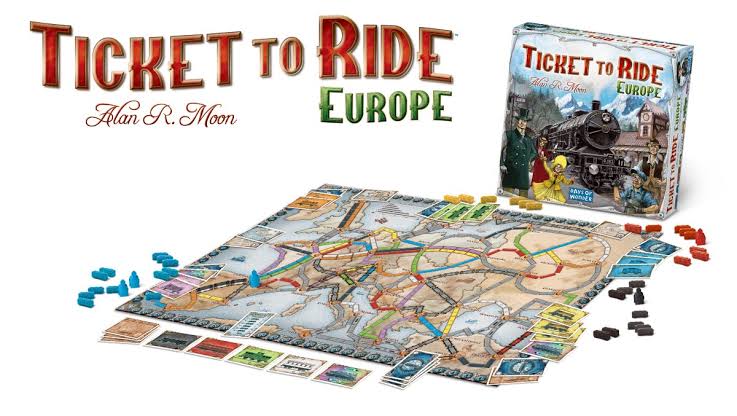 It’s a railway-themed German-style board game that was created by Allan Moon.

Available in multiple languages including English, German, French, Spanish, Italian, and many others, the title was published by Days of Wonder in 2004 with illustrations done by Julien Delval and Cyrille Daujean.

Ticket to Ride is a cross-country train-adventure where players collect and play matching train cards with the aim of claiming railway routes that connect cities in the entire North American region.

The longer the routes, the higher the points players score.

With the map positioned in the center of the table, each player will take his set of 45 colored train cars in addition to its matching scoring marker.

The marker is to be positioned on start.

Then, shuffle the train cards and deal four to each participant in the game.

Place the remaining deck of train car cards next to the board, ensuring the top five cards from the deck are positioned face-up.

Also, you’ll position the Longest Path Bonus card face-up next to the game board.

Now, someone will shuffle the Destination Ticket cards and deal three cards to each player.

Each player will decide the ones they want to keep, and the Ticket to Ride rules stipulate that a player has to keep a minimum of two Destination Ticket cards, but if they want, they may keep all three cards.

The returned cards are to be positioned on the bottom of the Destination Ticket deck, also next to the game board.

Every player has to keep their Destination Tickets secret till the game ends.

Select a player that starts the game first (this is typically the most experienced player).

The play continues clockwise till the end of the game.

On their turn, each player has to decide to carry out one of the following actions:

The player is allowed to perform only one of these actions.

The game starts with the players dealt four train car cards, which they’ll use as their playing hand.

Also, they’re dealt three Ticket to Ride Destination cards, with each showing a pair of cities on a map of the US and southern Canada.

These cities will become goals that stand for two end-points that players are trying to connect secretly.

The players have to keep a minimum of two of their destination cards and get rid of undesired tickets (if there are any) to the bottom of the stack.

Once it’s kept, a destination ticket may not be got rid of for the rest of the Ticket to Ride game.

Each player will also choose a set of 45 colored train pieces that has a matching scoring marker.

The player must select one of these options at each turn:

Draw two railway car cards in a variety of colors from the draw piles with the limitation that drawing a wild Locomotive card face-up will forfeit another card.

Play their collected railway car cards from their hand to claim a route on the game board and put the corresponding number of train pieces from their store on that claimed route to score points.

Draw three more destination ticket cards and keep a minimum of one to serve as a replacement for unwanted tickets at the bottom of the stack.

The routes have various lengths and require different numbers of matching colored cards.

Only one player can claim each discrete route marked on the game board.

Certain cities are linked together with two parallel routes, which a different player can claim, unless the game involves three or fewer participants, and in such a scenario, only one of the routes can be claimed.

Another point in Ticket to Ride rules to note is that the same player may not claim the two parallel routes between two adjacent cities.

When it’s their turn, a player is allowed to claim any route anywhere on the game board that hasn’t been claimed already, irrespective of whether the route will help in completing their destination tickets.

These routes score points by themselves.

However, the ones unconnected to a player’s destination don’t help them reach their destination or complete the destination ticket.

The last turn starts when a player’s stock of colored plastic trains decreases to two or fewer trains when his turn ends.

After that turn, the game comes to an end, and the player has to calculate their final scores.

During the game, the points a player earns for competed routes are already calculated.

Then, the players will reveal all of their Destination Tickets and add/subtract the indicated values.

Any player that has the longest continuous path of routes receives this special bonus card and is allowed to add 10 points to his score.

If a tie occurs, the two players will receive the points.

The continuous path could include loops and may pass through the same city many times.

However, a given plastic train may never be used two times.

The player that gets the highest score is the winner of the game.

Ticket to Ride is one of the best family board games of all time.

The title was created by Allan Moon and is a railway-themed German-style board game.

It’s available in several languages such as English, German, French, Spanish, Italian, and others.

It was published by Days of Wonder in 2004 with illustrations done by Julien Delval and Cyrille Daujean.