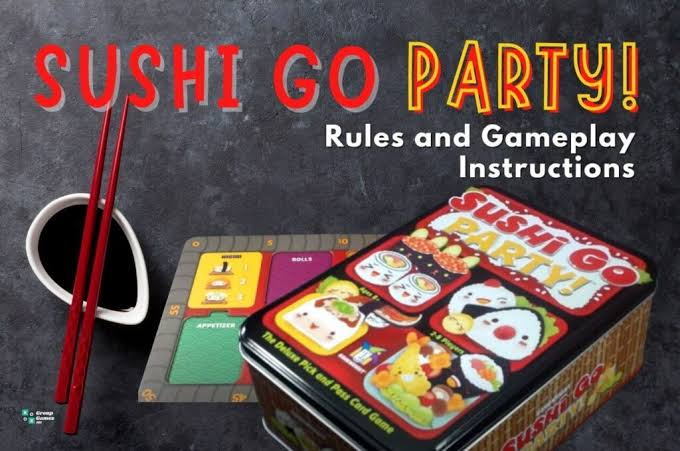 Sushi Go Party! is the highly successful follow-up to 2016’s Sushi Go! It’s essentially the same game but with a few adjustments to accommodate additional players.

The title is perfect for anyone needing something simple to pick up but with enough strategy to keep things interesting.

Furthermore, the ability to accommodate a large group is big plus; strategy games that have the capacity for eight players are few and far between. Each game of Sushi Go lasts approximately 20 minutes and can be played by two to eight people.

The objective of the game

Select from various meals to produce your sushi restaurant menu. Then aim to score the most points possible by grabbing the highest-scoring combination of cards. The player with the highest score wins.

Setting up a SushiGo party is a simple process. You and your friends will save time by skipping the preparation stage, which means you can play lots more rounds done.

Begin the game by placing the board in the center of all players. Then, have each player choose their colored pawn and set it on the gameboard’s 0 space

Select the cards that correspond to the difficulty level of the game you wish to play.

Pick one of the following:

To play, choose your card combination!  You may use any combination of cards that you prefer. Simply ensure that your game contains the following:

Each game makes use of nigiri cards.

Note that the menu and custom order cannot be used in a game with 7–8 players. Spoons and edamame aren’t permitted to be used in a two-player game.

SushiGo Party is played in three rounds, with the number of cards thrown out varying according to the round and the number of players.

Prior to the start of each round, shuffle the needed number of desserts into the main deck and lay the remaining cards face down alongside the gameboard.

Ascertain that the standard deck is shuffled and distribute cards according to the number of players.

Arrange the remaining cards next to the face-down dessert pile.

This game occurs concurrently—Each player selects one card from their hand and sets it face-down in their front.  Once this is completed, each participant reveals the cards they chose by setting them face-up.

Once you’ve shown your card, pass your remaining hand to the player to your left face-down. Then choose another hand to start a new turn.

You keep face-up cards until the round ends when they are scored. As you collect cards, organize them into columns of the same hue.

While the majority of cards score at the end of a round, a few contain special rules that might influence the present turn:

SushiGo’s scoring system is the most critical as well as the most complicated aspect of the game. Different combinations earn different points; that’s why it’s vital to choose the correct cards and determine the optimal combinations while playing.

Consider the following examples of scoring to be on the lookout for:

Nigiri: One point is awarded for each egg nigiri. Nigiri salmon is worth two points. Three points are awarded for squid nigiri. If any nigiri contains wasabi, multiply their score by three.

Rolls – Each roll type has its own variation, but the player with the most of every kind of roll when the round ends earn bonus points. For example:

Appetizers – While this variant of this category is a bit different, the points you get depends on how many appetizers you have. For example:

Dumpling – every extra dumpling earns you a point.  That is,

Edamame beans — Each edamame bean card is worth two points for any player who has it.

Specials – These cards grant special abilities at the end of each turn, use them to sway the tides or solidify a potential victory. For example:

Desserts – Accumulated while the game is going on. When the game ends, the desert gets added or subtracted based on what you have.

One of the most enjoyable aspects of SushiGo is that each card has a purpose and a score, which can change anytime, depending on the combination you make.

Be sure that each player is adequately educated on the value of each card prior to play beginning.

After three rounds, the game is over. Along with the regular scoring, be sure to score your dessert cards according to the instructions in the “Card Guide.”

Sushi Go Party is a very entertaining board game for both you and your friends. With the rules outlined above, you can play with close to eight players and still have fun. Simply follow the game’s instructions, and you’re good to go.

Pop o Matic Trouble Game Rules – What you should know

Betrayal at House on the Hill Rules & Strategies