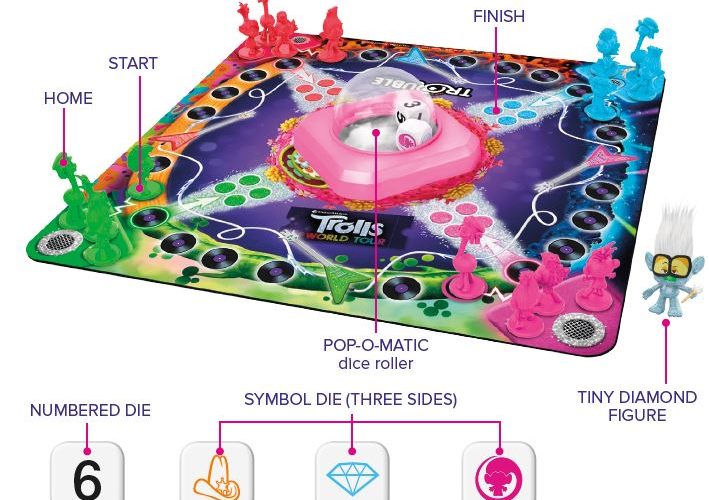 Trouble is a simple board game that involves 2–4 players. A specialized board that contains a pop-die roller (known as POP-O-MATIC) is used to play.

Based on the rules of the game, the object of Trouble is to become the first player to move all of your colored pieces (4 in total) from Home to Finish.

The most exciting part of the game is the specialized board that was introduced by Hasbro, featuring a “Pop-o-Matic” dice roller, which lies at the center of the game.

Ensuring the game is completely random, the popping center on the game board controls how the dice are rolled. Let’s walk you through Pop o MATIC Trouble game rules.

Components and Setup of the Game

This game from Hasbro features a plastic game board that has the “POP-O-MATIC” die roller. This component is the most interesting part of the Trouble board game.

Apart from this plastic component, there are also 16 plastic playing pegs that come in 4 colors and are typically some rubber gameboard feet that helps keep the board stable as you play.

The aim of the board game is to become the first player to move all the 4 colored pegs from Home to Finish. While the game is on, you’ll also try to send your opponents back home to force them to start their Trouble journey from scratch.

To start playing Hasbro Pop-o-MATIC Trouble, each member of your group will have to pick a color and put the 4 pegs in that corresponding color into the “Home” section of the plastic board.

If only 2 players are involved in the game, you can choose whether to play with 2 sets of pegs for ramping up the challenge.

To pick the player that starts the game, each player rolls the die by pressing on the POP-O-MATIC plastic dome once and releasing it. Then, the proprietary plastic bubble rolls the dice for you. The individual that has the highest number will play first, and play will continue with the person by their left.

Players are allowed to send opponents’ pieces back to the starting point by landing on them. Also, players may not touch the piece of other players; if this rule is broken, the owner of that piece has to redo the pop or roll.

Teaming is against the rules of this game. In addition to this, pieces are protected from getting captured after they’ve arrived in the final 4 slots. But unlike other more complicated race games, in Trouble, counters can’t be maneuvered for blocking opponents’ moves.

The “Pop-O-Matic” die container, which is the most notable feature of Trouble, is a clear plastic hemisphere that holds the die and is placed over a flexible sheet. To roll the die, players will press down quickly on the bubble, flexing the sheet and causing the die to tumble on its rebound.

The container makes a popping sound when used, and it safeguards the die from getting lost (and players from cheating through inappropriate rolling). Also, the device allows for quick die rolls, and the turns of players can be done in rapid succession.

Instead of the traditional circular pips, the die is imprinted with Arabic numerals (though in the Travel version, the circular pips are made use of, containing a cover that keeps the pegs from getting lost).

Players could only move pieces out of their start when the die lands on 6. When a player gets a 6 at any point in this game, they can also take another turn, even if they can’t move any of their pieces (as they can’t land on any of their own pieces).

If the die in the container hasn’t clearly landed on any number, then the player that popped it, is allowed to tap the “Pop-O-Matic”. However, they may not re-pop when the die lies in limbo.

The trouble board game was designed by the Kohner Brothers and was originally produced by Irwin Toy Ltd., later by Milton Bradley (who is currently part of Hasbro). It was launched in 1965 in the US, and the classic version is currently marketed by Winning Moves.

Headache is a similar game that was also manufactured by the Milton Bradley Company. Other than a different track layout, its pawns are conical, unlike the cylindrical pieces in Trouble.

Hasbro Trouble is a fun and fast-paced board game, which can be both exciting and frustrating. Due to the unique dice-rolling mechanics, it’s an engaging option for younger kids to play. (It can get noisy with young children, though.)

Apart from that, the popular title is now sold in various themes, such as Star Wars Trouble edition, Disney editions, and more.

If you fancy the idea of a dynamic game in which your chances of winning heavily depend on luck, and you won’t hesitate to get your friends upset by sending them back to the starting point of the game every now and again, Trouble will surely be a delight for you.

How to Play Blokus – Rules & Instructions

How to Play Tri-Ominos Game, Rules and Instructions