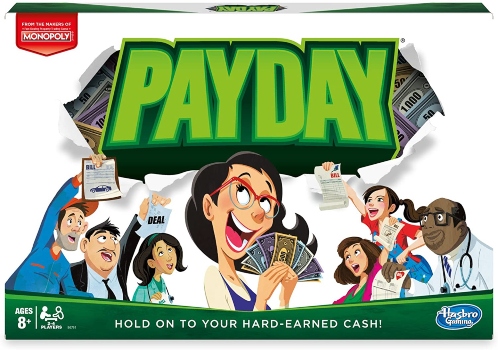 Playing Pay Day has been a part of childhood for most of us millennials. Perhaps our parents as well.

Monopoly has a significant impact on the gameplay, despite the game’s similarity to other resource management board games like Splendor.

It’s a game that many people have fond memories of, so it’s an excellent way for them to share it with their grandchildren.

Learn how to play Pay Day with the help of this guide.

Pay Day is a board game that dates back to the 1970s and was designed by two-game design luminaries of the era – Paul J. Gruen and his brother-in-law Charles C. Bailey.

Initially produced by Parker Brothers, the game was an instant success, outselling the iconic Monopoly in its first year.

Pay Day has been produced in numerous modified versions under the Hasbro brand name after Hasbro acquired the game’s original creators.

Determine the number of “months” you will play: From Monday the 1st to Wednesday the 31st, how many times will you flip through the calendar?

Tips: It’s best to choose a minimum of two months.

Separately shuffle the Mail and Deal cards and place them face down in Draw stacks near the board.

Tips: Any discarded Mail and Deal cards will be piled face up next to their corresponding stacks.

When a Draw pile is depleted, shuffle and use the discards.

Slide the top Deal card, face down, midway beneath the left side of the board, adjacent to the “Yard Sale” spot and beneath the “Deal” sign.

Each player selects a token and affixes it to the Sunday START area.

Select one participant who will serve as the Banker, accountable for all money entering and leaving the Bank.

Choose another player to serve as the Loan Record Keeper.

They will be responsible for keeping an account of all Loan transactions on the Loan Record Pad.

He or she should begin by writing the players’ names across the top of the pad; use two sheets for six players.

Determine which participant that’ll go first. (Both the Banker and the Record Keeper participate). The play moves in the left direction around the table.

Follow the directions on the space you arrive in; detailed instructions are provided below. Your turn is complete once you have completed the task assigned to you!

Draw the top Deal card if you land on a Deal space.

You have the option to pay for the item with the card right away, or you can get a loan to cover the cost.

If you have the money, buy a Deal card.

You can have as many Deal cards in front of you as you can afford at any given time.

For example, you’ll have to shell out $8,000 for Dipsydoodle Noodles.

Wait until you land on (or are sent to) a Found a Buyer spot to cash in the card for the additional value.

You can only sell one Deal at a time, and if you haven’t sold any Deals by the end of the game, you’ve lost all your money.

When you land on a MAIL spot, you’ll be dealt the amount of Mail cards shown on the mailbox flag.

Pay your bills and trash the mail cards as soon as possible, or wait until “Pay Day” to do so if you haven’t already done so.

Rules for special postal cards differ from the rest of the mail. These are a few examples:

Pay the sum on the card to a player of your choice as soon as you get it, even if you have to borrow the money.

As soon as you’ve drawn this card, go ahead and collect the indicated amount from a random opponent.

They may need to take out a loan in order to pay the bill.

Place the card’s value in the “Jackpot” section of the board.

Suppose you don’t have enough money to pay off the entire sum on Pay Day.

In that case, you must pay interest—a percentage of the total amount due—before you can roll the balance over to the next month.

On Pay Day, you can only pay the interest or the interest plus the entire charges. You can’t pay part of the balance.

Proceed to the Deal or Found a Buyer space of your choice and follow the instructions below.

Proceed to the following Deal or Buyer space. NOW

If you rolled a number that would carry you past this slot, come to a halt here.

Just as in real life, being compensated has a number of pros and cons.

What you should do in this order is as follows:

Collect your $3,500 monthly income from the Bank.

If you have taken out a loan, you must pay the bank 10% interest.

You may repay a portion or the entirety of your loan if you desire.

Payments must be made in increments of $1,000. On the pad, the Loan Record Keeper notes the transaction.

Ensure that you have paid off all of the invoices you got this month.

If you do not have enough cash on hand, consider taking out or increasing a loan.

Bills that have been paid should be discarded in the Mail card discard pile.

Return your token to START. On your next turn, you’ll retrace your steps through the month.

Discard any remaining Deal cards at the end of the previous month of play.

Once all players have completed the agreed number of months, all monthly bills are paid with the outstanding loan balance and applicable interest.

Since this is the game’s conclusion, participants do not collect their salaries, even though they have technically reached Pay Day.

Finally, the cash balances remaining with each member are totaled.

The member who has the most money remaining wins.

If all members are in debt, the member with the lowest loan or lease balance wins.

What are the restrictions for the Payday game’s walk of charity space?

When you land on the walk of charity space, the dice is rolled once for all other players.

To qualify for the Jackpot, gamers must deposit $100 multiplied by the number that appears on the die.

What happens if participants lack sufficient funds to participate in mandatory events such as town hall elections?

In spaces such as town hall elections, where each player must contribute a specific amount regardless of whether they land on the area! They must either increase the loan or withdraw from savings.

This is an exception to the rule about arriving on Pay Day.

Which method of earning money in the Pay Day game is the simplest?

Earning money passively is the simplest way to do it.

This occurs in the Pay Day game when you land on areas such as Sweepstakes, which allows you to collect a staggering $5000.

Another thrilling approach to earn free money is to win the Jackpot by just rolling a 6 on a regular turn.

Everyone, especially children, loves games! So there’s no way you won’t enjoy this game.

If you’re looking for similar board games that your children and possibly the rest of your family will enjoy, we have a few suggestions for you.

Alternatively, you may try Fibber or Candyland.