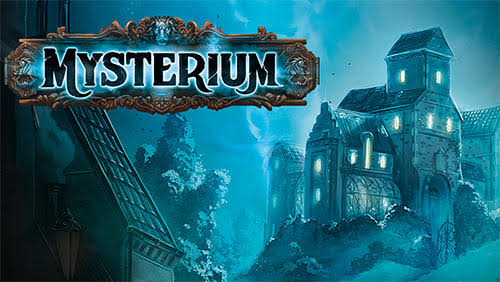 Mysterium game rules are a tad complex, but once you master them, you’ll find the title enjoyable. It’s a board game in which players attempt to solve a murder mystery.

It has a strategy for each scenario and is thus extremely adaptable in terms of player count and difficulty level.

While the intricate nature may make you doubt your ability to learn gameplay, as soon as you learn the ropes, you’ll be playing like a pro.

(Orient this to the clairvoyancy track’s 0 space)

Also, the number of players determines the clairvoyancy tokens. i.e.

Set the hour hand to 1 and place the clock on the table. i.e., the first hour. The space located in front of the clock is for discarding the clairvoyance token.

Arrange the progress boards according to the rules.

Put the clairvoyancy track near the epilogue progress board, facing up on the side that matches the participant’s number.

Then, the ghost sets the screen in front of him. Each row refers to a sort of ghost card: character, place, or object, and each column relates to a different psychic.

Level of Difficulty in the Game

Select the difficulty level. It’s the determinant of the quantity of character, location, and object cards that’ll be used

The ghost collects the number of crow markers that match the difficulty level.

Then, shuffles the psychic character cards, place it facedown and draw with the number facing up.

Select the character ghost cards whose numbers correspond to the drawn character psychic cards and give them to the ghost.

Without glancing at the remaining cards, return them to the box.

Repeat the same steps for both the location and object cards. Each psychic receives a set of three cards (character, location, and object).

There are two phases in this game:

The psychics try to figure out who the suspects are, where the crime was done, and what the murder weapon was.

Their intuition token is moved along the four progress boards to show their progress.

Place the intuition tokens of the psychics’ on the character progress board.

In this case, the ghost must aid the psychics to guess the character card behind the screen.  He does it by projecting a vision of one or more vision cards onto each psychic.

Each psychic tries to decipher a vision and find the character/location/object it alludes to. It’s open season for psychics to look at their pictures or psychic cards and exchange ideas.

The ghost then starts the sand timer for all psychics.

Each psychic must lay their intuition token before the timer runs out. The other psychics can aid by evaluating cards and giving their advice.

Psychics can move their intuition tokens till the sand timer runs out.

The ghost is allowed to discard any or all of his vision cards at any time during the game, even during the Revealing the Culprit phase.

Making use of clairvoyancy tokens

Players may add or withdraw clairvoyance tokens from the other psychic’s intuition tokens until the sand timer ends. In the last phase of the game, psychics can use these tokens to advance on the clairvoyancy track, perhaps unlocking further clues.

The ghost appears to tell the psychics if they accurately interpreted their visions. He can choose any order he likes to reveal this information.

He tells each psychic whether or not their intuition was correct or not.

After appearing to a psychic, the ghost removes the appropriate ghost token from the screen. Each of the right Clairvoyance tokens increases the position of their Clairvoyance tracking token in the Finale Area by one.

When a player gets to the Finale space, they can advance their Clairvoyance tracking token up one position for each remaining round

After this procedure, advance the hour hand on the clock by one hour.

The psychics’ intuition tokens may be located on different progress boards.

A fresh Reconstruction of Events phase is initiated if one or more psychics are unable to identify their character, location, or object. If the clock had already reached the VII (seventh hour), the game is over, and the players lose.

If all psychics accurately identify their assigned character, place, and object, proceed to Phase 2:

This phase occurs if all psychics correctly identify their character, location, and object before the clock hits VIII.

The psychic’s group their card combinations to compare the suspects and help the ghost find the guilty.

Any psychic cards that weren’t placed in sleeves should be returned to the box.

The psychics receive all their clairvoyancy tokens.

Put one ghost token per psychic in the table’s center. Return the unused ones.

The psychics take three cards from their sleeves and set them in the middle of the table, each having one suspect.

The ghost guides the psychics to the culprit’s cards on the table.

Next, the ghost shuffles the shared vision cards and spreads them out across the table.

The ghost sets the matched culprit token facedown in the culprit slot on the epilogue progress board.

The psychics must choose the group containing the alleged culprit. The ghost cannot say which card in the shared vision corresponds to which element. During the voting process, the psychics cannot contact each other.

The vote is disclosed when all vote has been cast.

Disclosing the votes and the real culprit

Hands off all sleeves to the psychic having the highest clairvoyancy score.

The player then places each clairvoyance token on the card group that matches the ghost token’s number.

That way, all players win the game collectively, and the ghost’s spirit rests. Then, the game is over.

Mysterium is an exciting game like Clue to play once you understand the rules. So why don’t you gather some of your friends and try it out?