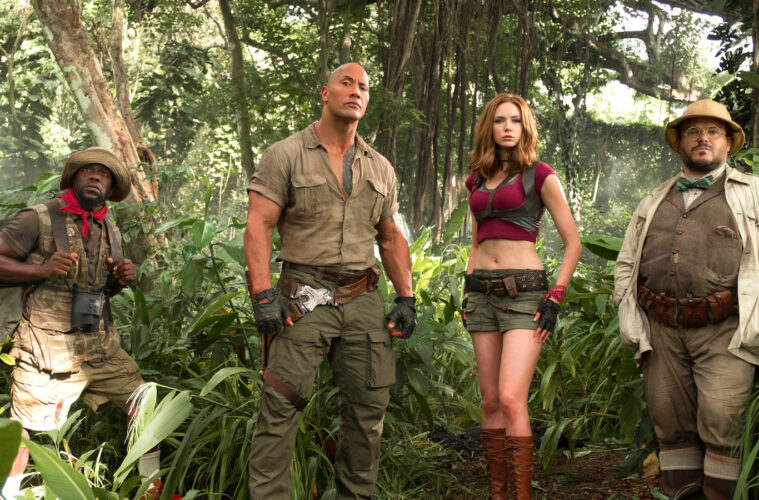 Jumanji Board Game Rules and Guide

Jumanji is a race board game. You’ll know how it works it you’ve watched the movie starring The rock & Kevin hart.

Each player’s objective is to follow their allotted path and make their way to the enormous Jumanji Space in the game board’s center.

This game is suitable for players aged eight and above and can be played in groups of two to four.

The game takes approximately 45 minutes to an hour to complete.

To win, players must flee the jungle and make their way to the board’s center by deciphering riddles, saving one another, and using their wits to dodge lurking perils.

Due to Jumanji’s uncooperative nature, there can be only one genuine winner.

Thus, the person who reaches the Jumanji Space first wins the game, but everyone loses if the Doomsday Grid fills up before then!

You must be the first player to reach the Jumanji Space and shout “Jumanji!” before the Doomsday Grid is completely filled.

Jumanji comes with everything you’ll need to play.

The following items are included in the Jumanji game:

Suppose you’ve recently acquired the Jumanji game and are playing for the first time.

In that case, you may be told to apply stickers to the eight-sided blank dice included in the box before beginning playtime.

The person who came up with the idea for the game gets to start first.

After that, there is always a timer, and a number die in play when it’s the player’s turn.

Roll the dice. Move your pawn in the direction indicated by the Die, taking the number of spaces displayed.

When it’s your turn, follow the space directions. Pass the timer and the number dice to the player on your left when your turn ends.

There are four distinct types of places to be found. When your pawn reaches one of these spaces, do the following on your turn.

You must draw a Danger Card if you arrive here. Make sure all participants are aware of the Danger Card by reading it aloud.

Some flavor text, as well as a symbol and a numerical value, will be displayed on the Danger Card.

Now, when you’re in danger, it’s up to your friends to save you.

The other participant rolls their Rescue Die until they individually reveal a symbol represented on the Danger Card or a Wild symbol.

Finally, the sand timer is turned over, and the game begins (hourglass).

Everyone must roll the matching symbol before the countdown runs out.

Those who did so will move forward with the number of spaces indicated on the Danger Card.

A player must shift backward the number of spaces on the Danger Card if the countdown expires and no one has a matching sign.

The remaining participants will remain in their current positions.

Put the Danger Card on the Doomsday Grid after that, then.

Until someone rolls a 5 or an 8, you and your teammates must take turns rolling the Number Die, starting with the player to your left.

You’ll move your pawn back one space each time this attempt is made until someone rolls a successful one.

Then, it’s game over, and the other players will cease moving if you are pushed back to your Start space.

You must roll your rescue dice when you land on these areas, which means that all other players are stuck in the jungle.

It is up to the players to draw a danger card and put it in the decoder.

To prevent the threat, follow the same steps you would for a blank spot.

All participants must roll one of the relevant symbols before the timer runs out in order to win.

Pawns will move the number of squares indicated on the card if all players correctly roll the symbols.

The danger card is put on an empty Doomsday Grid square if any players fail to roll the correct symbol.

Players race against the clock to complete a new hazard card that has been drawn.

Once a player has drawn a card, they will keep drawing until one of them has been completed.

You can momentarily halt another player’s progress if you land on a Rhino space.

Place the Rhino figure in front of the participant of your choice and press the start button.

Once a player arrives on a Rhino square and decides to move the Rhino, that person cannot go forward.

OR, if a player is blocked, they must roll an even number on their next turn in order to move.

Suppose the blocked participant rolls an odd number on their next movement attempt.

In that case, they will perform the action they are presently stuck on.

Players caught in front of Rhinos will be blocked in their route even if the Rhino is shifted rearward for any reason; the Rhino will follow.

The gaming board’s left and right side panels include the Doomsday Grid.

When a failed effort results in a Danger Card being discarded, that card is added to this grid.

First discarded Danger Cards are placed on the bottom left panel of the grid.

After that, you’ll see a few more cards above it, as well as the next one.

A Danger Card appears on the top of the right panel when the left panel is full, and any other cards are placed below.

Beware! If the Doomsday Grid is filled to the brim, the game is over!

To Win the Game

For a player to win in a game of Jumanji, they must be the first to move their pawn onto the Jumanji Space and exclaim, “Jumanji!”

For this, you must roll the exact amount of spaces needed to enter the Jumanji Space.

Your current location is saved if you move a higher number than the target.

As long as a Danger Card moves you exactly one space in the right direction, it’s considered to be a winning move!

Begin the game with half-filled Doomsday for a more complex experience.

The Wild symbol on your Rescue die is ignored when rolled if you are playing with only two players and want to add some spice to the game.

What Are Other Jumanji-like Games?

If you liked this Jumanji board game rules guide, you may also be interested in learning about the following similar games:

End of the Game

It’s all about timing. To win, make your way to center stage first and shout out “JUMANJI!!!”

In order to get in the middle of the gameboard, you can do one of two things:

After rolling the number die, count the number of digits on your Die.

On a fellow player’s turn, by the exact amount count after moving forward on a danger card.

The exception is if the dice or card number is more than the number of spaces you need in order to get to the center of the board.

Your time will come when the directions for your area are given.

Jumanji can be called by more than one player at once, but only one person can win if they yell it first.

It’s important to note that if the Doomsday Grid fills up before a player reaches its center, then all players lose!

So you have to play the game again till someone is victorious!